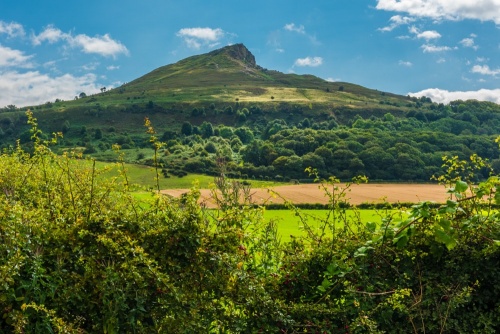 Roseberry Topping from Newton-under-Roseberry
A true landmark in the North Yorkshire landscape, Roseberry Topping is a distinctive hill just beyond the northern extremity of the North York Moors National Park. The views from the summit of the hill are superb, and on a clear day, you can see south over the Moors, west to the Yorkshire Dales, and over Teesdale to the north.

The area affords a habitat for moorland animals and birds. The Cleveland Way National Trail runs by the foot of the hill, and a spur of the trail leads up to the summit of the Topping. A trail links Roseberry Topping to Captain Cook's Monument on Easby Moor.

The notable shape of the Topping is due to a combination of a geological fault and the collapse of mining works in the early 20th century.

There are two main walking routes to enjoy Roseberry. The first is from a pair of parking areas on the A173 a mile north of Great Ayton village. From the parking areas follow Roseberry Lane east to its end, then take either a direct route leading straight up the hill (it's hard work!) or the more indirect trails that lead more slowly up a series of switchbacks to the summit. 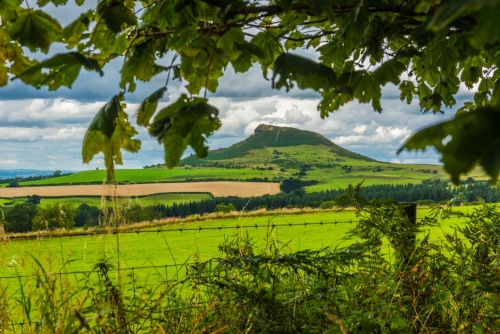 Another popular walking route starts at Great Ayton rail station and takes Dikes Lane east until you meet a footpath running north towards Roseberry Topping. Alternatively, continue along Dikes Lane until you reach the Cleveland Way long-distance trail and follow that as it curves east and north to the summit of the Topping.

Several people have asked about the correct postcode to use for navigating to Roseberry Topping by satnav. For the Newton-under-Roseberry parking areas on the A173 use TS9 6QS, and for the Great Ayton rail station use TS9 6HQ.

If you want to start your walk from the parking area on Dikes Lane for access to the Cleveland Way just continue east along the lane from the rail station and you will come to a very obvious parking area with good access to the trail leading north to Roseberry Topping or south to Captain Cook's Monument.

More self catering near Roseberry Topping >>