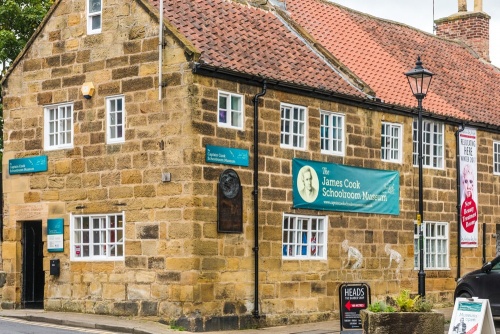 Captain James Cook, famous for his voyages to the South Pacific, was born at Marton, Yorkshire, but grew up in the village of Great Ayton, under the shadow of Roseberry Topping in the north-western corner of the North York Moors.

From 1736-1740 James Cook attended school in this simple stone building on High Street. The building has been restored as a museum covering Cook's life and career, with a focus on his childhood here in Great Ayton.

The school was founded in 1704 by Michael Postgate, a local landowner, as a gift to the community, providing education to those who would not otherwise be able to afford it. He gave money to provide schooling for eight poor boys. Postgate then remarried, and at the age of 75 he and his wife had a son. Perhaps thinking that he needed the money for his own family, Postgate stopped paying the schoolmaster's salary. 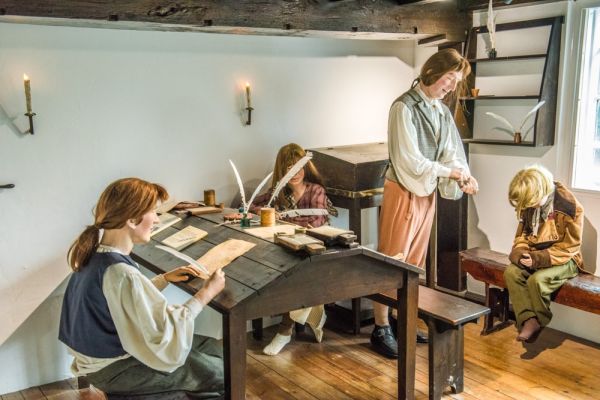 The school was forced to close for several years but eventually reopened around 1734. Education was no longer free, and student's families had to pay the schoolmaster's salary themselves. There was no shortage of parents willing to pay the fees, for by 1743 there were between 20-30 students being educated in one room by William Rowland.

James Cook was eight when his family came to Great Ayton, where his father worked as an agricultural labourer for Thomas Skottowe at Aireyholme Farm, a mile outside the village on the southern slope of Roseberry Topping.

James was immediately sent to the Postgate School, and his school fees were paid by his father's employer, Thomas Skottowe. James had to walk four miles to school and back every day. 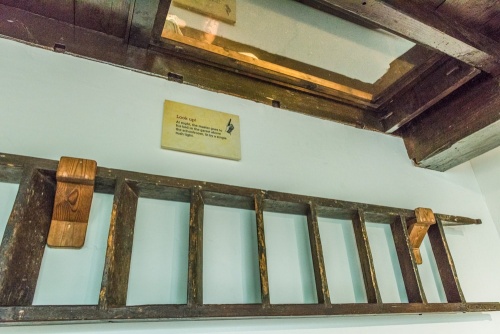 The school consisted of a single ground floor room for lessons with a garret room above for the schoolmaster. Cook's schoolmaster was William Rowland, who was licensed to teach by the Archbishop of York. Rowland was also hired to write the annual churchwardens accounts for All Saints Church, further west at Low Green.

James Cook attended Postgate School until he was twelve. It was to be the only formal schooling he received in his life. It is likely that his schooling was regularly interrupted so that he could help his father on the farm.

When he left school he worked beside his father for several years before leaving home at the age of sixteen and moving to Staithes, where he fell in love with the sea and eventually launched his naval career.

The village of Great Ayton grew during the 18th century, but that increase in population meant an increase in poverty. By 1785 it was obvious that the village needed some form of accommodation for the poor of the parish.

The single-storey schoolhouse was pulled down and rebuilt in its present layout, with a poorhouse on the ground floor and a schoolroom on the first floor and a garret in the attic for the schoolmaster's accommodation. So the building we see today is not the same one that James Cook would have recognised, but it is quite similar. 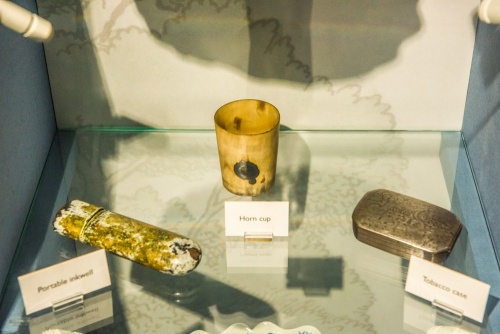 The centrepiece is a recreation of the schoolroom where Cook was taught, with worn wooden desks and benches. On the wall are maps of Cook's voyages.

The museum looks at Captain Cook's early life, his time as a schoolboy in Great Ayton, and his career as a seafaring explorer and cartographer. It also looks at life in Great Ayton, what the village was like at the time Cook lived here, and there is a wonderful exhibition of some of the colourful local characters who lived and worked here.

There is also a display of objects linked to Captain Cook, including ceramics owned by his wife Elizabeth, a mourning ring, and Cook's portable inkwell, horn cup, and tobacco case. On the wall is a copy of

On the schoolhouse exterior is a sculptural plaque by Nicolas Dimbleby, erected in 1914. Dimbleby also sculpted the statue of Cook on the High Green. A short stroll from the schoolhouse is the site of the Cook family cottage.

The Captain Cook Schoolroom Museum is at 101 High Street in the heart of Great Ayton, near High Green and east of All Saints Church. There is free parking along the High Street. 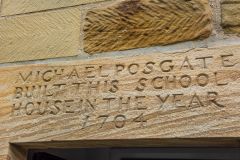 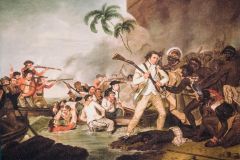 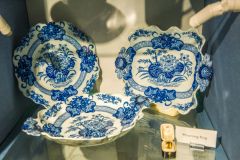 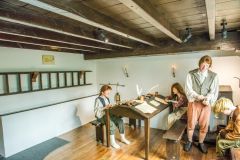 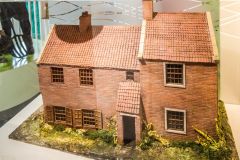