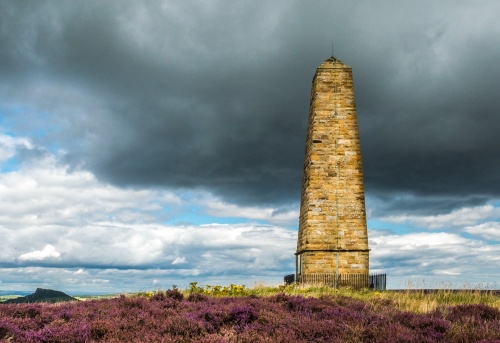 On a heather-clad moor overlooking the Yorkshire village of Great Ayton stands Captain Cook's Monument, a striking obelisk erected in 1827 in memory of the seafaring famous explorer, who was born six miles away in Marton but grew up in Great Ayton.

Captain Cook would have walked these moors when he lived at Great Ayton from 1736-1745. He attended the local school (now the Captain Cook Schoolroom Museum) on the High Street.

The monument was built by Robert Campion, a wealthy banker from Whitby and owner of the Easby Manor estate. Campion launched the idea of a monument and called for donations from the public but none were forthcoming. Undeterred, Campion decided to bear the total cost of the monument himself.

Campion laid the foundation stone on 12 July 1827 - his birthday. It was officially completed on 27 October 1827, Captain Cook's birthday. The obelisk is hollow, and it originally had a doorway, but this seems to have been filled in when the monument was restored in 1895. 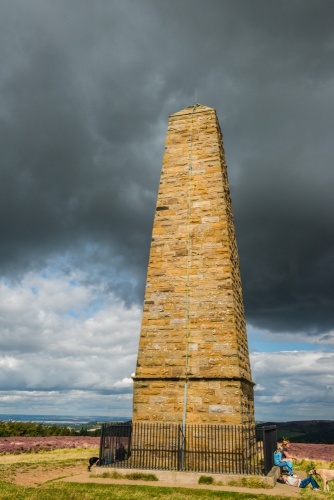 Stormclouds over the Monument

The restoration also repaired the masonry and the capstone, put iron railings around the base, and added a lightning conductor. Unfortunately, the conductor rusted, and in 1960 to the monument was severely damaged in a lightning strike which nearly split it down the middle. It was restored once more to its 1895 condition.

Initial plans called for an obelisk 3.6m square (12 square feet) at the base and 12m (40 feet) high. Plans must have changed during construction, for the finished obelisk is 6m (40 feet) taller.

The obelisk is made of locally quarried sandstone and stands 60 feet high (18m). Topping the monument is a 'benben' stone; a pyramidal capstone. A rectangular panel near the base of the monument remembers Cook in these words: 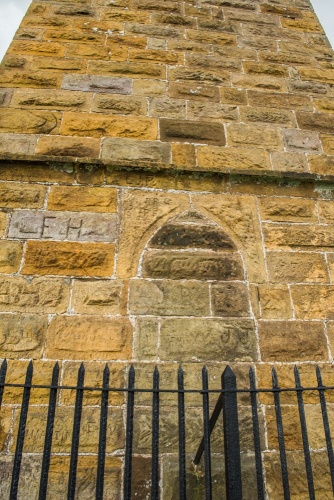 In memory of
the celebrated circumnavigator
Captain James Cook F.R.S.

A man of nautical knowledge inferior to none,
in zeal prudence and energy, superior to most.
Regardless of danger he opened an intercourse
with the Friendly Isles and other parts
of the Southern Hemisphere.
He was born at Marton Oct. 27th 1728
and massacred at Owythee Feb. 14th 1779
to the inexpressible grief of his countrymen.

While the art of navigation shall be cultivated
among men, whilst the spirit of enterprise,
commerce and philanthropy shall animate
the sons of Britain, while it shall be deemed
the honour of a Christian Nation to spread
civilisation and the blessings of the
Christian faith among pagan and savage tribes,
so long will the name of Captain Cook
stand out amongst the most celebrated and
most admired benefactors of the human race.

As a token of respect for
and admiration of the great man
this monument was erected by
Robert Campion Esq. of Whitby, A.D. 1827

By the permission of the owner of the Easby Estate
JJ Emerson, Esq. it was restored [date obscurred] 1895
by the readers of the North Eastern Daily Gazette. 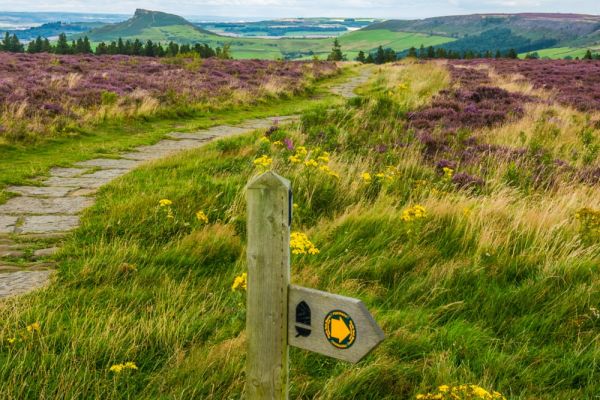 The Cleveland Way National Trail goes past the Monument 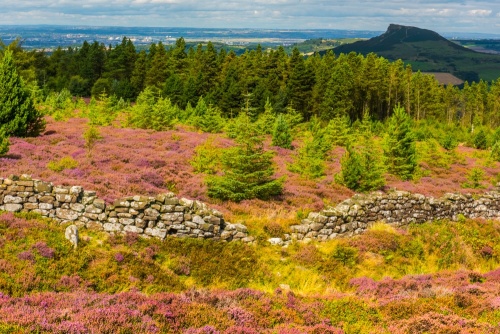 The view to Roseberry Topping

The inscription was written by Dr George Young of Whitby, a pastor of the United Presbyterian Church on Cliff Street in Whitby and a well-known local historian.

The view from the Monument is spectacular, with sweeping vistas north to Roseberry Topping and over the Cleveland Hills and the North York Moors.

Note: don't mistake Captain Cook's Monument for the memorial that stands on the site of Cook's boyhood home in Great Ayton village. Just to confuse things, that memorial is also in the shape of an obelisk, though much smaller than the monument on Easby Moor. 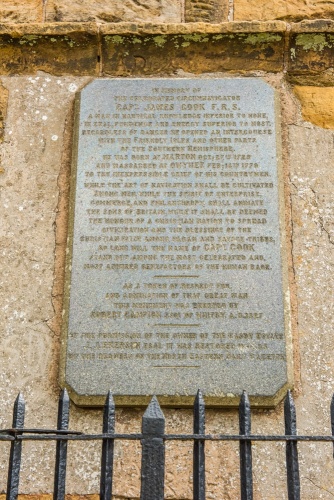 You can reach the Monument by footpath from Great Ayton village or Roseberry Topping, but the simplest way is to follow the footpath from the car park at Gribdale Gate on Dikes Lane. Just follow the road past the railway station and keep going as it climbs up into the moors.

There is a gravelled car park on the left. Here you can take a path on the left to Roseberry Topping for views to the coast at Staithes, or cross the road and follow the obvious path leading uphill to Captain Cook's Monument. The going is steep in places but not difficult. It is roughly 1km (0.6 miles) to the top, and should take no more than 15 minutes.

Both Roseberry Topping and Captain Cook's Monument are directly on the Cleveland Way National Trail.