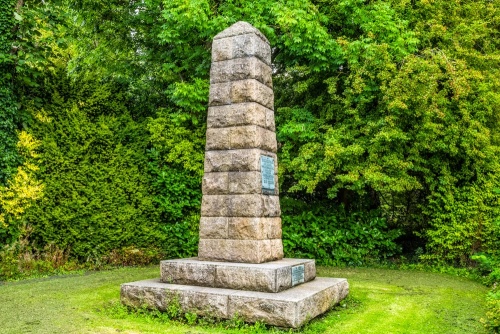 Captain James Cook was born in Marton, Yorkshire, near Middlesbrough. At the age of eight, the Cook family moved to Great Ayton, on the edge of the North York Moors. Young James attended school at Postgate's School on High Street and his father, James Snr., worked as a farm labourer for Thomas Skottowe, the lord of the manor.

James, Jr. left home at the age of 16, moving first to Staithes and then to Whitby.

In 1755 James Cook, Sr. built a home for the Cook family on Bridge Street in Great Ayton, The younger James joined the Royal Navy in that same year to begin his seafaring career, so it is certain that James the younger never lived here, and may never have even set foot inside the cottage. 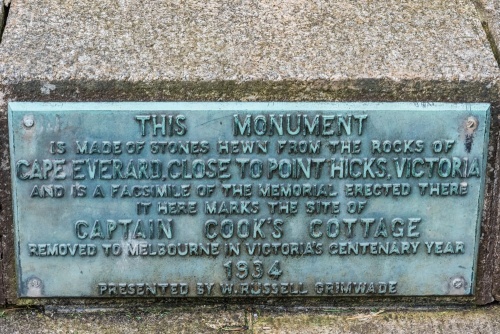 We know of only one occasion when Captain Cook returned to Great Ayton after he left home. That was in 1771 when his father fell ill. Cook took leave from the Royal Navy and came to Great Ayton, but he stayed with the Lord of the Manor.

That didn't stop the dilapidated cottage being advertised for sale in 1934 as 'Captain Cook's boyhood home'. No local buyers were willing to stump up the £400 asking price, so a wealthy philanthropist named Russell Grimwade stepped in. Grimwade paid twice the asking price (£800) and had the cottage disassembled and shipped to Melbourne, Australia where he donated it to the Fitzroy Garden and the people of Melbourne to mark the state of Victoria's centenary.

It is the oldest house in Australia and is a major tourist attraction, standing within an English-style garden. 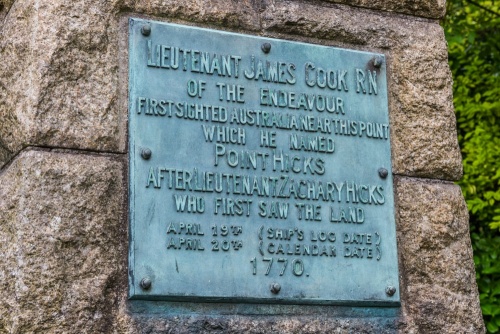 The obelisk was made from granite blocks quarried at Point Hicks (aka Cape Everard), the first point of the Australian mainland sighted by Captain Cook. The obelisk is a replica of a similar monument that stands at Point Hicks. It is made from 39 pieces of granite and weighs roughly 13 tons.

The plinth is eight feet square, and the obelisk stands 13 feet high. It was unveiled on 15 October 1934 by Mrs Linton, the wife of the Honourable Richard Linton, Agent-General for Victoria, with the ceremony timed to roughly coincide with the opening of the Cook cottage in Melbourne. 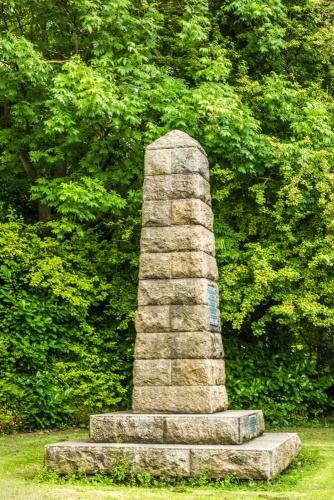 Another look at the granite obelisk

There are two plaques fixed to the monument. On the monument's base the inscription reads:

THIS MONUMENT
IS MADE OF STONES HEWN FROM THE ROCKS OF
CAPE EVERARD CLOSE TO POINT HICKS VICTORIA
AND IS A FACSIMILE OF THE MEMORIAL ERECTED THERE
IT HERE MARKS THE SITE OF
CAPTAIN COOK’S COTTAGE
REMOVED TO MELBOURNE IN VICTORIA’S CENTENARY YEAR
1934
PRESENTED BY W.RUSSELL GRIMWADE

On the front face of the monument is this inscription:

The house site is now a small memorial garden, though the only real garden feature is the memorial.

Do not mistake this memorial on the site of the family's house, with the Captain Cook Monument on Easby Moor, overlooking the village.

The Captain Cook Memorial is at the southern end of Bridge Street (heading away from the river), on the left-hand (east) side of the road. There is no dedicated parking and no apparent tourist signs. You should be able to find parking along High Street and walk to the site.