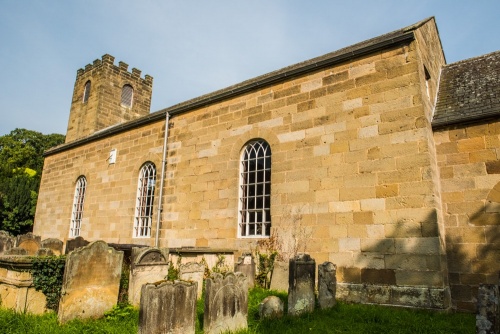 There was a medieval church on this spot, but that was replaced with the current building in 1785. One wall of the medieval church was retained, and a selection of medieval monuments.

On a rise of ground above Skelton Beck is the Georgian stately home of Skelton Castle. The castle was probably begun by the Brus (Bruce) family as early as the 11th century. Later owners were the Fauconberg family, who built the first church here in the 14th century.

The medieval church was rebuilt in 1785 by John Hall-Stevenson. Two bells survived from the medieval church. One was moved to the new All Saints church on the High Street, and the other was given to the Victoria and Albert Museum in London. The exterior stonework shows obvious herringbone stonework in keeping with traditional local styles.

The interior features a three-decker pulpit and typical Georgian box pews and a west gallery. The transept was used as a family pew for the owners of Skelton Castle and features panelled walls, box pews, and a small fireplace for comfort during services.

The pews are all numbered on the end door, and roughly half have a family name painted on the wall. This is a reminder that churches generally rented pews to raise money for operating expenses, with the better pews towards the front of the church costing more than cheaper pews at the rear. Many families had their names painted on their rented pews, which were a sign of social status. 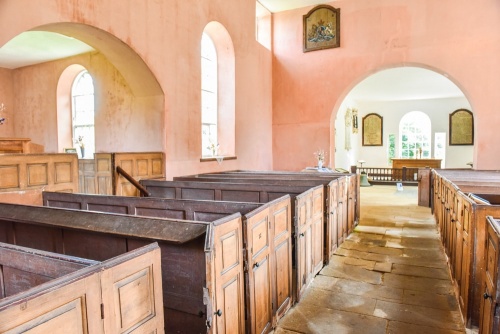 Box pews in the church nave

On the chancel arch and walls are painted boards depicting the Commandments, as well as Biblical texts. These are thought to predate the 1785 church.

In the chancel are very good 17th and 18th-century memorials including several to the local Trotter family of Skelton Castle. One is a lovely marble monument to John Trotter, who died in 1701 at the age of 42. The inscription is fascinating and worth repeating here:

To the memory of John Trotter, Esqr. who departed this life December 23rd 1701 in the 42nd year of his age. He married Elizabeth daughter of Godfrey Lawson, Esqr. a merchant of Leeds, by whom he had six sons, Lawson, Edward rector of Segstone, John grocer & citizen of London, George an officer in the Army, Henry, Fellow of Jesus College Cambridge and rector of Graveley in that county, & Robert who died an infant; their daughters were Elizabeth who died unmarried, Mary wife of Thomas Purchas Esqr. of Blaithwaite, Margaret who died in her infancy, and Katherine wife of Joseph Hall Esqr. who died September 29 1740 at Crossgate Church in the city of Durham, having survived him seven years in the 46th year of her age.

The said Elizabeth Trotter gave June 2 1715 one hundred pounds, and procured the like sum from her relations with which and two hundred pounds given by the Governors of Queen Anne's Bounty this curacy was augmented, and the money since laid out in the purchase of freehold lands in this parish.

She also gave by her will fifty pounds to the Charity School at Leeds the place of her birth; She died at Durham September 23rd 1726, aged 63 years, and was buried at the church of St Mary le Bow in that city. She passed through life with the general esteem of all ranks and degrees & was indeed a woman of true & unaffected piety & died as she had lived without an enemy.

John Trotter her husband died of that painful distemper the Gout, with which he had been many years afflicted and which he always bore with remarkable patience and resignation being a person of true piety.

On the floor is a stone slab with an indent for a long-vanished brass, depicting a man and woman with several children. The slab and missing brass are thought to be 15th century, during the time when the Fauconbergs owned Skelton Castle, but there is no indication who it was meant to commemorate.

On the wall is a memorial to John Calvert, who died in 1705.

In 1891 an 11th century Saxon stone carved with runes was found in the churchyard, suggesting that there may have been an earlier church on the site. Also found were three medieval stone coffins and a carved coffin lid, now on display inside the church. A local tradition says that the cottages lining the drive to the church and castle were originally used as stables for people attending church services.

A new All Saints church was built nearby in 1884 and the Georgian church fell into disrepair. It was declared redundant and is now looked after by the Churches Conservation Trust. The church is usually open every day, but should it be locked there is a keyholder nearby. We found the church locked when we visited but the sign on the door led us to the keyholder's house just a few doors away, and she very helpfully opened the church for us. There is room for several cars to park in front of the church. 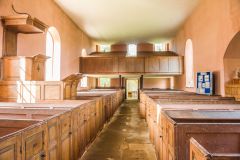 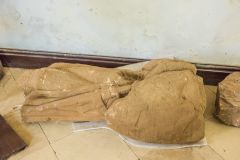 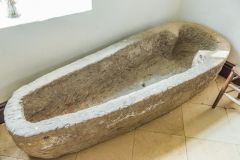 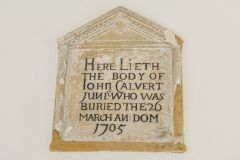 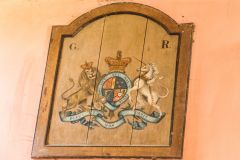 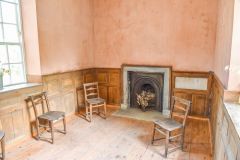