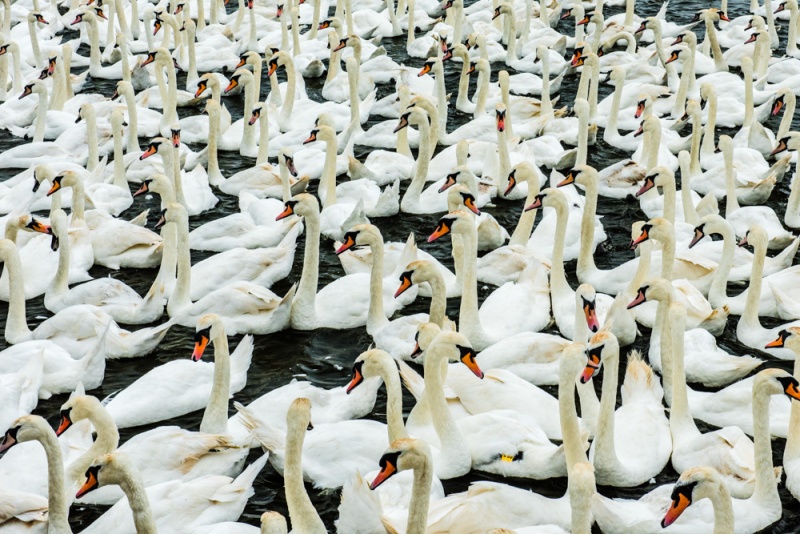 Feeding time at the Abbotsbury Swannery

A colony of mute swans has lived in this sanctuary since medieval times. Wander amid nests of newborn cygnets in spring, and observe the swans at close hand.

There has been a swannery at Abbotsbury since at least the 14th century. The swannery may have been established by the monks of Abbotsbury Abbey, but it seems more likely that they simply took advantage of a natural swan habitat provided by the shelter of Chesil Bank.

Mute swans are not silent, as their name might suggest; rather, the name refers to the fact that their call is not loud. The mute swan is native to Europe and Asia, though it has been introduced in other areas. The colony at Abbotsbury is properly the Abbotsbury Colonial Nesting Herd.

They come to Abbotsbury because the sluggish waters of the Fleet, sheltered from the sea by the 8-mile long stretch of shingle known as Chesil Bank, has created here a habitat lush in "eel grass", underwater plants on which they feed.

The unique joy of Abbotsbury Swannery is the opportunity it provides to observe newborn cygnets (baby swans) at close hand. From late May, visitors can wander amid the nests, and see the cygnets at close distance.

The swans provided meat for the monks long ago, but today they provide feathers for the helmets of the Gentlemen at Arms; the Queen's bodyguard. In addition, Lloyds of London uses quills from Abbotsbury swan feathers to register insurance losses in their "Doom" book. 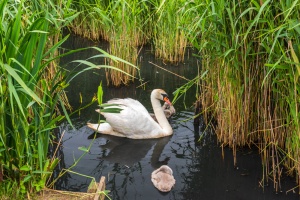 A mother swan and cygnets

The first monastery at Abbotsbury was established in the 1140s by Orc, the steward of King Cnut. The monks managed the nesting swans to provide food for their monastery and important guests. When the monastery was dissolved by Henry VIII in 1538 its estates passed into private ownership. Most of the former monastic lands, including the Swannery, became part of the Ilchester Estates, under the Count and Countess of Ilchester.

The actual management of the swans traditionally fell under the control of a 'swanherd'. One of the swanherd's duties was to protect the swans from poaching. Punishment for poachers was severe; in 1830 they might receive a fine of 20 guineas, equivalent to a full year's wages for a farm worker.

The post of swanherd was an important one during the medieval period when the monks relied on swan meat for a regular supply of food.

The most famous swanherd was Fred Lexster, who was a popular presenter on radio and television during the 1950s. 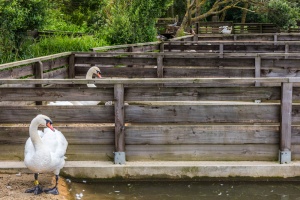 The most popular feature at the Swannery is the swan feeding, which usually takes place twice a day at noon and 4pm. Visitors are encouraged to join the feeding, and children are especially welcome to spread grain for the hungry swans. It is quite an amazing sight to see hundreds of swans packed together, anxiously trying to get as much of the grain as possible. I noticed that there was a large gathering of Canada geese waiting beyond the milling mass of swans, hoping to pick up leftover grain.

There are special pens for injured swans, and rows of 'rearing pens' where orphaned cygnets are placed with established swan families in the hope that the parent swans will take on the young ones as part of their families.

Look for an information panel with an old photograph of a visit by the famous ballerina Anna Pavlova in the 1920s. Pavlova visited Abbotsbury to study the swans in preparation for her role in the ballet Swan Lake. She was photographed with her troupe, in full ballet costume, standing on the very spot where the photo is displayed.

There is a special raised observation platform to enable visitors to get a better view of the Fleet and its inhabitants, and a bird hide for avid birdwatchers. In truth, the swans are so accustomed to visitors that you don't really need a hide to observe them. I was able to walk beside adult swans at arm's length without disturbing them at all. 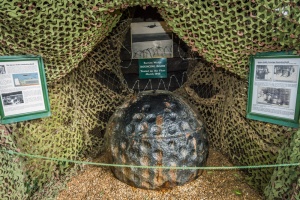 Abbotsbury Swannery was the scene of an unusual episode in military history. During 1943 the Fleet was chosen to test the 'bouncing bomb' designed by Barnes Wallis. The bouncing bombs were dropped from a specially altered Wellington bomber into the shallow waters. The tests proved successful, and the bouncing bombs were used in the famous 'Dambuster' raids of May 1943. A test bomb, dredged up from the Fleet, is on display near the visitor entrance to the Swannery.

Near the bouncing bomb is a 'trow'; a shallow-bottom boat traditionally used on the Fleet. One trow on display was made in 1904 in anticipation of a visit by King Edward VII. Unfortunately, the king had to change his plans and never did appear, but the boat is a fascinating example of the type used for centuries in the shallow waters of Abbotsbury.

Another historic display is a duck decoy pipe, built in 1655. The decoy, the oldest in Britain, was designed to lure ducks into an ever-narrowing tunnel made of reeds, following a trail of food until they were trapped at the narrow end of the tunnel.

The Abbotsbury Swannery is fascinating; I learned a lot about the history of the swannery and it was incredible to wander amongst the swans and see the mass feeding. It is a sight I won't soon forget. 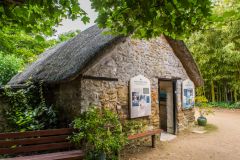 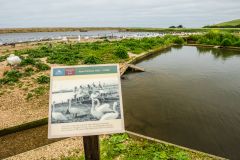 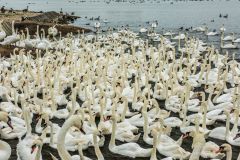 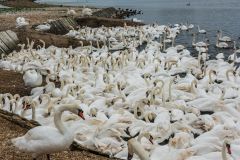 More self catering near Swannery

More bed and breakfasts near Swannery