Chesil Beach and The Fleet 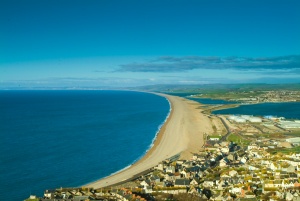 Chesil Bank and The Fleet
from Portland

A striking shingle beach stretching 8 miles from Portland to Abbotsbury, Chesil Bank protects a shallow lagoon called The Fleet from the ravages of the sea. The Bank and Fleet provide habitat for a variety of bird and plant life, as well as a large colony of mute swans at the Abbotsbury Swannery.

Chesil Bank and the Fleet

Looking down on Chesil Bank from the headland of Portland it is hard to realize just how high the shingle rises. Descend to Chiswell, at the most southerly end of the causeway connecting Portland to the bustling port of Weymouth, and you see that the dune towers over nearby multi-story buildings! 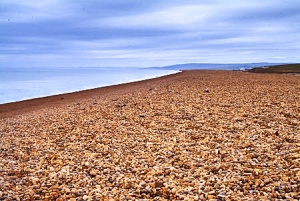 Atop Chesil Beach near the
Ferrybridge visitor information centre

Chesil Bank is a "storm beach", and local legend has it that the beach was created in one night by a violent storm. More likely, the shingle was created by a geological action in the last ice age that threw up large quantities of seabed matter.

Whatever its provenance, the Bank is a striking and largely unspoiled pebble beach, like a dune composed of stones rather than sand. It stretches from Portland to Abbotsbury, 8 miles (13 km) away, and along the way, its bulk provides shelter for the unique flora and fauna of the Fleet.

The Fleet is a long, narrow lagoon, with only a narrow entrance to seawater via Portland Harbour at Ferrybridge. The sheltering effect of Chesil Bank on the seaward side of the lagoon causes the Fleet to be warmer in summer and cooler in winter than the surrounding area. 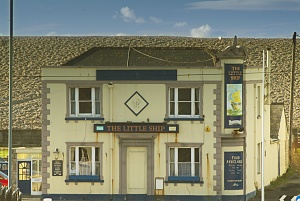 Chesil Bank looms over this inn in
Chiswell, Portland, at the eastern
end of the beach.

The unique characteristics of The Fleet allow several distinct types of habitat: Saltmarsh, Freshwater marsh, and coastal grass cliffs. The area provides important breeding ground to several bird species as well, among them the little tern and ringed plover. The Fleet supports over 150 species of seaweed and 60 species of mollusc. The western end of The Fleet is home to a very large mute swan colony, wich can be visited at the Abbotsbury Swannery.

This unique nature reserve is operated by the Ilchester Estate, who have owned the property since 1543. The estate provides a warden to look after the interests of wildlife in the region and administers the information centre at Ferrybridge.

Access to the visitor centre at Ferrybridge is off the A354 on the causeway between Portland and Weymouth. Access also at the village of Fleet, three miles west of Weymouth off the B3157, and at Abbotsbury.