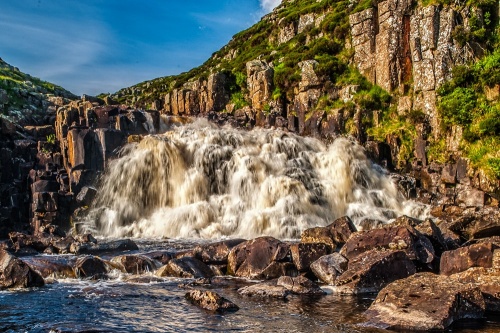 Cauldron Snout is a waterfall on the River Tees on the border between Cumbria and County Durham. The waterfall is immediately downstream of the Cow Green Reservoir and can be reached only by a 3km (1.9mile) walk from the reservoir car park.

That relative isolation means that you are unlikely to meet other visitors while enjoying the waterfall walk. We didn't see another soul on the walk there or back. Those visitors you do see are likely to be walkers on the Pennine Way National Trail, which passes directly past the waterfall.

To call Cauldron Snout a waterfall is perhaps slightly misleading; it is more of a long cataract rather than a straight drop. The cataract stretches over 180m (200 yards), making Cauldron Snout the longest (but not the highest) waterfall in England. 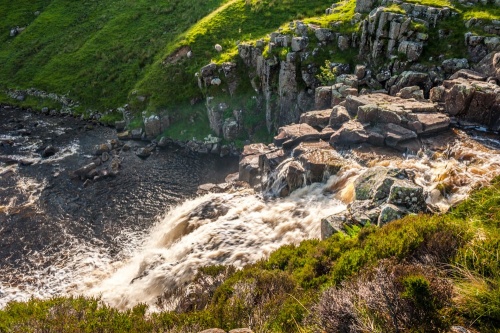 Looking down the cataract 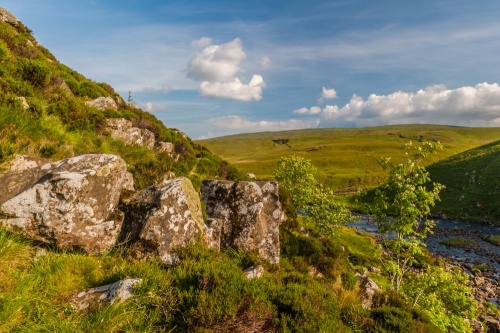 Looking south from the waterfall

The waterfall was the subject of a poem by Letitia Elizabeth Landon, published in Fisher's Drawing Room Scrap Book, 1835. Landon describes the cataract in these terms:

A place of rugged rocks, adown whose sides
The mountain torrent rushes; on whose crags
The raven builds her nest, and tells her young
Of former funeral feasts. 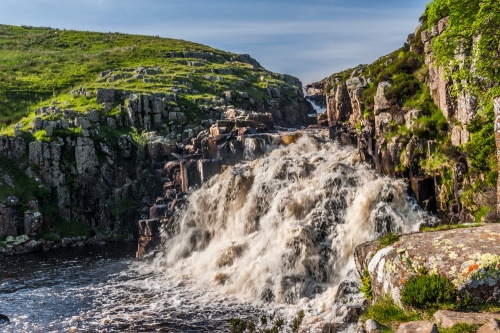 Turn off the B6277 at Langdon Beck, where a minor road runs beside the Langdon Beck Hotel. If the hotel seems vaguely familiar it may be because it has featured several times in the popular TV detective series 'Vera'. Follow the signposted route for Cow Green Reservoir until you arrive at the free parking area directly overlooking the reservoir.

From there, follow the obvious footpath south along the shore towards the dam head. The waterfall begins immediately below the dam. The Pennine Way trail crosses the outflow beneath the cataract.

Allow at least 40 minutes for the walk to the waterfall and an equal time returning. There are no facilities at Cauldron Snout. What makes this an attractive outing is the setting, with wonderful views over an unspoilt landscape.