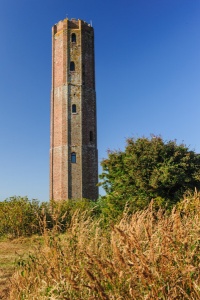 The Naze is a rocky headland stretching north from the esplanade of the north Essex town of Walton-on-the-Naze to the Hamford Water estuary. Atop the highest point of the headland is a brick-built octagonal tower, erected by Trinity House in 1720 to serve as an aid to navigation along the Essex coast. Trinity House was the organisation charged with building lighthouses and protecting shipping routes around Britain.

The Naze Tower was built with a beacon on top to serve as an early form of lighthouse. Tudor maps show that there was a tower of some sort on the Naze, so the 18th century tower almost certainly replaced a tower that had existed since at least the 15th century.

Throughout its existence the tower has undergone several changes of use; it was a teahouse in the 18th century, and it served as lookout post during the Napoleonic Wars and again in WWI. During the Second World War, a radar station was established here. The crenellated top of the tower had to be removed to make room for the radar dish. It has been privately owned since 1986 and open to the public since 2004. 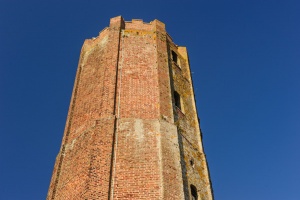 When the tower was built in 1720 it stood at least a quarter mile inland, but over the ensuing centuries erosion has eaten away at the cliffs, with the result that the tower is now only 50 metres from the edge.

The threat of coastal erosion prompted local people to form a charity group known as the Naze Protection Society, which managed to raise funds to build Crag Walk, a viewing platform below the southern end of the cliffs.

The Walk is 110 metres long and offers views of the cliffs, with interpretation boards to explain the geology and wildlife habitat of the area. Aside from offering public access at high and low tide, the Walk helps protect the cliffs from erosion, thus helping preserve the Tower from the very real threat of collapse.

You can climb to the top of the tower via a spiral stair that rises 111 steps to a viewing platform for views across the Naze and over the town of Walton to the south. On a clear day you can make out the lighthouse on Orford Ness, in Suffolk. There is a museum explaining the history of the tower and the natural history of the headland. 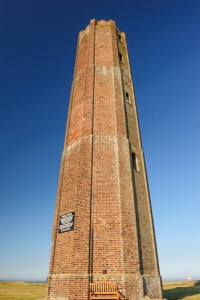 There is also a gallery arranged over 6 floors of the tower, selling inexpensive works by local artists. The art is inspired by the East Anglian landscape, and in many cases by the Naze itself. The exhibition changes three times a year. On the ground floor is a small shop selling souvenirs, and there are picnic tables near the base of the tower.

There is a small admission charge, which helps pay for operation and preservation of the tower.

The tower is listed Grade II*, which means it is the only building of its type and time period in the country.

The name 'naze' derives from the Old English term 'naes', meaning a promontory, or, more simply, a nose. To the north of the tower is a nature reserve, with walking trails, and the area is known as a good place to find fossils. Among other ancient relics that have turned up along the shore are fossilised wood, shells, and shark teeth.

There are two distinct SSSI (Sites of Special Scientific Interest) on the Naze; Hamford Waters, with its natural bird and wildlife habitat, and the Naze Cliffs, with its rich fossil deposits. The area will be familiar to readers of Arthur Ransome's popular children's story 'Secret Water'. 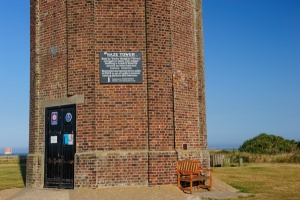 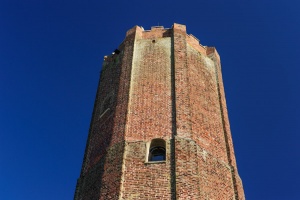 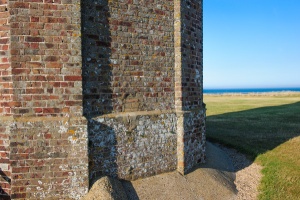 More self catering near Naze Tower

Self Catering near Walton-on-the-Naze