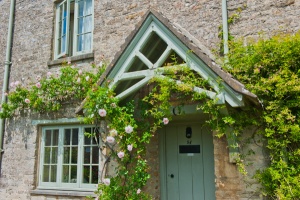 A pretty cottage near the church

A pretty Cotswold village near Bibury, with lovely cottages and the River Coln meandering through. The village rises up a sloping hill from the river, with traditional Cotswold stone cottages lining the High Street.

Most of the cottages are 17th and 18th century, with a large number of later 19th-century estate cottages built for the country house of Williamstrip Park, owned by Sir Michael Hicks Beach at the time.

Like many Cotswold villages, the medieval prosperity of Coln St Aldwyns was built on wool, and most of the villagers worked at weaving. Late in the 18th-century emphasis shifted towards farming.

Country Life magazine once described Coln St Aldwyns as one of the top 10 most desirable villages in England. Certainly, the combination of ivy-clad cottages and the peaceful River Coln make the village a wonderful place to visit.

On Church Road is Coln Manor, a large manor house dating to the 16th century. Rebuilt in the Victorian period, this attractive house is two storeys with an attic, under a slate roof. It was the home of the wealthy Fettiplace family, who owned large swaths of land and manors throughout Oxfordshire and Gloucestershire (see Swinbrook).

The Fettiplaces were Quakers, and their manor at Coln became a regular gathering place for non-Conformist thinkers. One such was John Bellers, who married into the Fettiplace family in 1686. Bellers was an outspoken writer on social issues, and famously advocated a national system of hospitals, with free medical care for the poor, anticipating the National Health Service by over two centuries.

In 1860 the manor was purchased by Sir Michael Beach Hicks, later the 1st Earl St Aldwyns. It served as an auxiliary to Hatherop Castle School but has now been converted into residential dwellings. 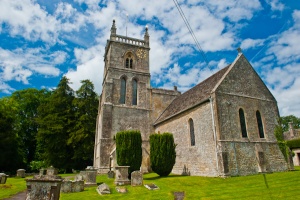 The school was built in 1856 and housed 76 students in regular daytime classes. Interestingly, it also offered evening classes to 35 children of labouring families who were out in the fields working during the day. The school closed in 1971.

One interesting row of cottages is modern but still deserves a note; these are six Memorial Cottages, erected by Michael St John Aldwyn, the 2nd Earl, in memory of his grandmother Lady Lucy. The six cottages were built with stone taken from a demolished wing of Williamstrip Park. The location for the cottages was a field where Lady Lucy's Shetland pony used to be pastured.

The village store is in a 16th-century building once used as a poor house. In the 19th century, it was a girl's school, but in 1852 it was purchased by Sir Michael Hicks Beach (look for his monogram carved on the building) and rebuilt and enlarged.

Near the shop were the village bakery and a bathhouse, the baths being heated by the baker's ovens. Villagers paid three pennies to take a weekly bath (presumably whether they needed it or not!)

The parish church of St John the Baptist dates to the 12th century and features a wonderfully decorated Norman doorway, with beast head hoodmould carvings that may suggest a Saxon origin. High on the exterior of the nave is a curious carving of a demon chasing a man.

There are numerous Roman remains surrounding Coln St Aldwyns. aerial photographs have revealed earthworks that may be a Roman road - or perhaps a medieval 'hollow way'. A section of the Roman Akeman Street can be clearly seen from the air, as can the foundations of a Roman villa (grid reference SP 1580 0849), a fairly small structure measuring only 15 metres long and nine metres wide.

There is a possible Bronze Age round barrow just outside the village (grid reference SP 1483 0678). Somewhere near Coln St Aldwyn is Williamstrip, a deserted medieval village that is known only through documentary evidence. Much more in evidence is Williamstrip Park, a late 18th-century park created by Samuel Blackwell, with tree-ring enclosures, a dew pond, and odd mounds that must have been garden features of some sort.

I owe a debt of gratitude to the wonderful village website for much of the background historical information in this article.

Self Catering near Coln St Aldwyns