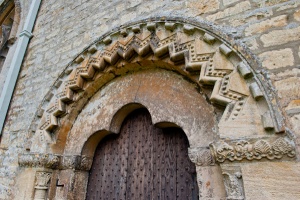 Tour buses descend upon the pretty village of Bibury, in the heart of the Gloucestershire Cotswolds, like locusts on a field of grain. They are drawn primarily by the combination of the historic almshouses known as Arlington Row, and the combination of the peaceful River Coln flowing past the ivy-covered Swan Hotel and the nearby Bibury Trout Farm.

A few of the tourists wander down the river, past the almshouses, and make their way to the oldest part of Bibury village, perhaps drawn by the intriguing signpost 'Historic Church'.

Those who do wander off the beaten tourist track find themselves at St Mary's church, a Grade I listed building and a gem among Cotswold churches. We do not know when the first church was built at Bibury, but it was probably shortly after Bishop Wilfrith of Worcester granted the estate to Earl Leppas and his daughter Beaga (721 - 743 AD). The village became known as Beagan-byrig, or Beaga's enclosure. Over centuries the name was gradually corrupted into its current form of Bibury. 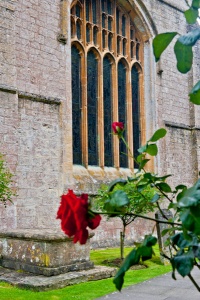 There was certainly a church here at the time of the Domesday Book in 1086 when the manor and church were owned by St Mary's Priory in Worcester. In 1130 the estate passed to Osney Abbey, near Oxford, and it remained in Osney's hands until the Dissolution of the Monasteries.

THE BISLEY PIECE
A peculiar tale attaches to a section of the churchyard, which has been known for centuries as 'The Bisley Piece'. Bisley is a village about 15 miles to the west of Bibury, near Stroud. The inhabitants seemed to make a habit of running afoul of church law.

One consequence of the interdict was that the people of Bisley were not allowed to bury their dead anywhere within the Diocese of Worcester for the duration of the penalty.

The closest place outside the diocese which would accept Bisley burials was at Bibury. so the people of Bisley had to carry their dead fully 15 miles to be buried here. So over time the name 'Bisley Piece' attached itself to the section of the churchyard where the Bisley dead were interred.

EXTERIOR
The first thing you see when approaching the church is a series of fruit trees lining a walkway to the north door. The doorway is a beautifully carved piece of Norman craftsmanship, built about 1180. It has a plain tympanum which has been rather oddly cut to create a trefoil pattern over the door, which is now blocked.

The capitals and abaci are decorated with very fine palm-leaf carvings. If you follow the wall east from the door you will see a well-preserved Saxon gravestone set into a small buttress on the chancel wall.

This is carved with interlaced rings and pellets in a traditional Saxon pattern. Two other similar stones were found in the churchyard and are now in the British Museum. There are further fragments of Saxon gravestones inside the church near the south door. 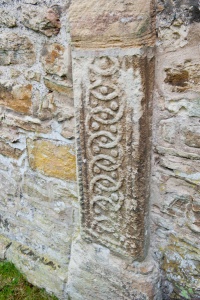 If you follow the walkway around the west end of the church you pass the huge Perpendicular west window, inserted in the 15th century. The south porch arch is decorated with dog-tooth moulding, but the Norman door to the nave is plainer, with a simple hoodmould and floral bosses. Outside the porch are several interesting 17th and 18th-century table tombs with barrel tops.

THE INTERIOR
The original Saxon church at Bibury was quite small, probably consisting of just a nave and small chancel. In the Norman period, the nave was lengthened and aisles added, and in the 13th century, the Gothic chancel arch was inserted to replace the rounded Saxon arch. This gives the current arch its peculiar profile, with Saxon jambs and capitals flanking a pointed arch, which breaks through a Saxon string course high on the wall.

Above the string course, you can see remnants of a medieval rood screen stair and a pair of small medieval windows that used to shed light onto the rood loft. The nave walls were raised and a new clerestory inserted at the same time as the chancel arch was built, and a south porch added. In the 15th century, the tower was raised and a new timber roof built. This timber roof is one of the glories of St Mary's today.

As you pass through the doorway you immediately see one of the more unusual features of Bibury church; the square 13th-century font, supported on four octagonal corner legs and a fifth central leg, with each face of the font adorned with a pair of trefoil arches. Set in a low niche by the font are the remains of Saxon and later gravestones. 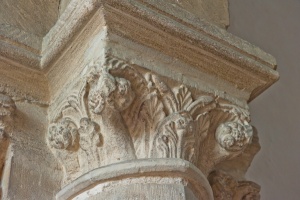 The chancel is dominated by a large three-light 13th-century window, but what is even more eye-catching are no less than nine aumbry cupboards. There are three aumbries below the east window, four on the north wall and two on the south. In addition, there are two piscinas in the chancel.

Why on earth are there so many aumbries? One inescapable conclusion is that in the medieval period Bibury church had a huge collection of valuables which needed to be safely stored! Also in the sanctuary is a small window retaining some original 13th-century stained glass.

OUR VISIT
I loved St Mary's. Despite the fact that I last visited on a fairly sunny summer's day, I was able to dodge the tourists and fid an enclave of peace and quiet in the churchyard. There is so much to see, from the Saxon and Norman carvings to medieval windows and stained glass, and the striking chancel arch with evidence of Saxon, Norman, and Early English work. St Mary's is a delightful church, and well worth a visit. 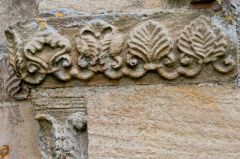 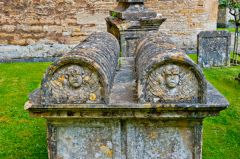 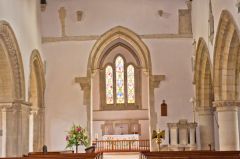 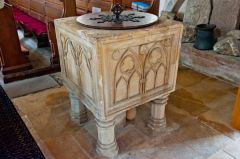 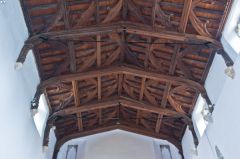 More self catering near Bibury

More bed and breakfasts near Bibury

Self Catering near Bibury