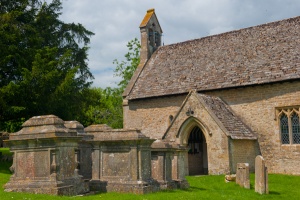 The church of St Michael stands on a shelf of land just off the quiet lane that leads from Bibury and Adlington to Coln Rogers. The proximity to Bibury explains why St Michael's was originally a chapel under the auspices of Bibury church.

TABLE TOMBS
17th and 18th-century table tombs sprout before the south porch of St Michael's like mushrooms after a rainstorm. At first glance, you find your eye constantly drawn away from the church itself to the cluster of tombs, as if they are competing for attention.

We do not know exactly when the first chapel was built at Winson, but it was in existence before the mid 12th century, when records show that John of Pagham, Bishop of Worcester, gave Bibury and all its chapels to Osney Abbey, near Oxford. Winson remained in the hands of the Abbey until the Dissolution of the Monasteries. 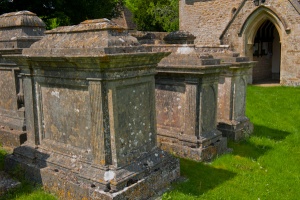 There is one remaining 12th-century window in the chancel and a blocked north doorway of a similar age. The porch is 13th century, but the main south door is Norman, very similar n style to the north door, with scalloped capitals and billeted hood moulding. Within the porch is a 15th-century niche, with an ogee-shaped arch. Evidence of a metal grill suggests that the niche was used to display a valuable religious relic.

Carved into the shafts of the porch are numerous votive crosses, thought to have been carved by inhabitants about to undertake a journey, perhaps a pilgrimage. Think of votive crosses like a spiritual IOU; a promise that the traveller would make a gift to the church if they returned safely from their trip. Just outside the porch is a worn base of a 15th-century cross.

The very useful church guide points out that most of the burials here are on the south side and east of the churchyard. There is a good reason for this; in the medieval period the belief arose that the north door of the church was a 'devil's door', and evil always came from the north. Hence most north doors were blocked up, and people were reluctant to be buried on the north side of the church. 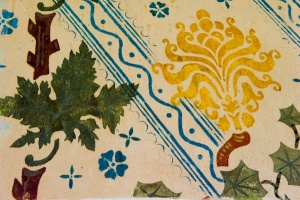 INTERIOR HIGHLIGHTS
The chancel arch is Norman, with scalloped capitals. On the left side of the chancel is a small Norman window, evident by its wide and deep splay. The font is Norman, but it is set on a more modern base. There are two Early English lancet windows in the chancel and another just west of the porch.

There are several other 14th and 15th century windows throughout the church. The stone pulpit dates to the 15th century, though it has been well-restored. It is one of around 20 remaining stone pulpits in Gloucestershire. A crowned corbel head is carved at the base of the pulpit.

One other interesting feature is one of the newest; the chancel is decorated in Victorian Revival style that has more than a hint of art nouveau about it. Three of the walls are painted with vines and honeysuckle, and the floor is set with colourful mosaic. The effect is quite appealing, even if it strikes a bit of a peculiar note given the age of the rest of the church. On the north wall of the chancel is a marble monument to John Howes (d. 1808).

Winson church is an attractive country church in a lovely setting. 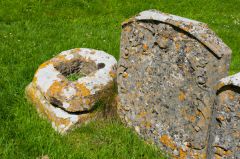 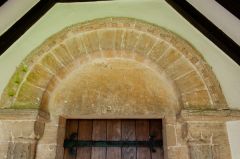 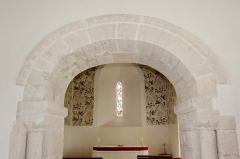 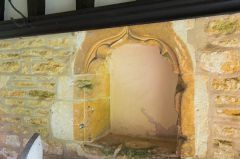 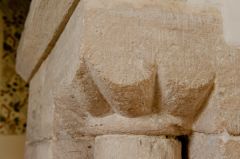 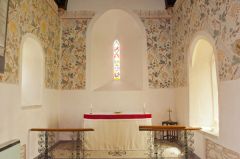 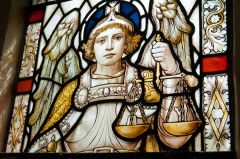 More self catering near Winson

More bed and breakfasts near Winson