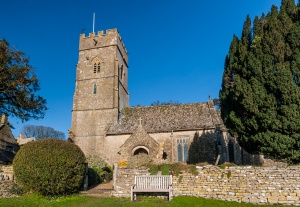 Hampnett is a very small village up a minor road near Northleach, just south of the busy A40 road and just off the Roman Fosse Way (A429). Though the roads are close, little noise intrudes to ruin the sense of peace and quiet of Hampnett.

It seems like a place forgotten by the passage of time, with golden-toned Cotswold cottages on a ridge, looking across a wonderfully idyllic landscape of hills and drystone walls.

The village was mentioned in the Domesday Book of 1086 when it had 25 tenants. The manor was owned by Eldred, Archbishop of York under Edward the Confessor, and was later appropriated by Roger d'Ivry of Tetbury.

King John seized Hampnett and granted it to Ilbert of Hereford. In 1213 Hampnett was held by Giles de Breuse, Bishop of Hereford, and it stayed in the hands of the Breuse family until 1263, and it was later owned by the Priory of Llanthony in Wales.

The Old Manor House stands beside the church and may date in part to the 1380s when Hampnett was in the hands of Roger of Moreton. The current Hampnett Manor was built in 1879 as a house for a farm bailiff.

The area around Hampnett is bestrewn with ancient monuments. A quick glance and the National Monument Record maintained by English Heritage shows remnants of a medieval village, numerous Bronze Age round barrows, a Neolithic long barrow and further round barrow by Furzenhill Barn, medieval strip lynchets, remnants of a Roman settlement and an Iron Age settlement. And that's just a start.

A Roman bronze statue of Hercules was found at Hampnett and is now in Cheltenham Museum. The Roman villa of Chedworth is a few miles away, and in the valley at Northleach is one of the finest medieval 'wool churches' in Britain. But the most enjoyable historic site is the lovely little parish church of St George.

The interior of Hampnett's church is decorated with truly amazing Victorian stencilling. The effect is startling, but it also gives a sense of the kind of colour a medieval church may have had. The stencil work, based on floral themes, was the idea of Rev W Wiggins, vicar of Hampnett in 1868. The church building itself dates to the Norman period.

More self catering near Hampnett

More bed and breakfasts near Hampnett