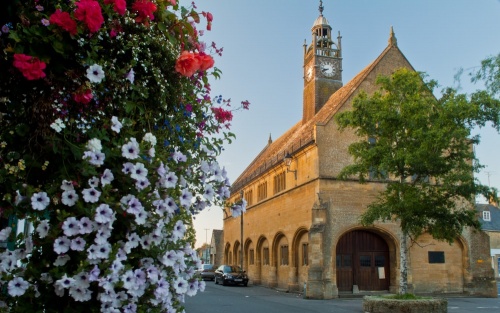 Summary
Moreton-in-Marsh is a lovely market town in the northern Cotswolds, situated on the old Roman Fosse Way, famous for its wide High Street.

Moreton-in-Marsh is situated at the head of the Evenlode valley. The Romans saw the strategic importance of the location and built a fort here about 43 AD where Batsford Road is now. This first fort was followed by later settlements just north and south of the current town site.

There was a town here in the Saxon period, and in the 9th century, Moreton-in-Marsh was granted to Deerhurst monastery. It passed to the Earls of Mercia, and eventually to King Edward the Confessor, who used it as part of his endowment for Westminster Abbey.

The town remained in the possession of Westminster Abbey until the Victorian period, and it is to a 13th century Abbot of Westminster that Moreton owes its wide High Street. A market charter was granted in 1227, and the right to have a town fair was added in 1267. 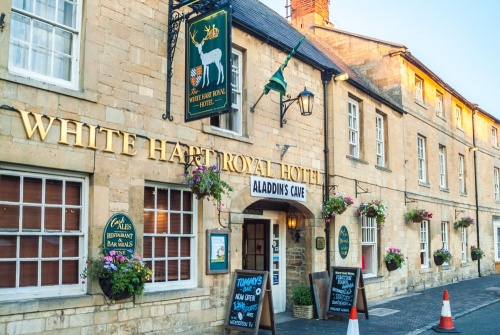 Lovely old inns are ranged along the High Street

The situation of Moreton at a crossing of the Fosse Way and the main London to Worcester roads meant that it became a popular place for travellers. As a result, there are several old inns and eateries spread along High Street even today.

King Charles I granted Moreton-in-Marsh a new market charter in 1638, and the unfortunate king stayed at the White Hart in 1644. The White Hart is just one of the inns in Moreton reputed to be haunted (others being the Manor House Hotel, Black Bear Inn, Bell Inn, and the Redesdale Arms).

The Bell Inn is famous amongst avid readers of JRR Tolkien, for it is said to be the inspiration for the Prancing Pony in Bree. Tolkien regularly met at the Bell Inn with his brother Hilary, for Moreton-in-Marsh is roughly halfway between Oxford, where Tolkien taught, and Evesham, where Hilary lived.

The greatest time of prosperity for Moreton-in-Marsh was the 18th century, as the town became a major staging post for travellers. As a result, most of the best buildings date from this period, and medieval examples are harder to find than in some of Moreton's neighbours. The earliest building on the High Street is the Curfew Tower (c. 1633) at the junction of Oxford Road. The original curfew bell still hangs in the tower. 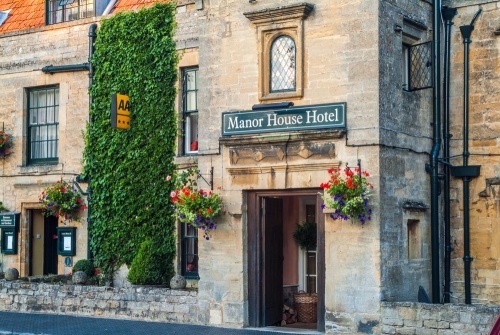 The name of this beautiful Cotswold town may need some explaining; Moreton comes from 'more ton' or a settlement on the moor, and 'in marsh' comes from 'henmarsh' for bog land where wild birds could be found. In the 18th century, the name had evolved into 'Moreton-Hendmarsh' or 'Moreton Henmarsh'. The boggy ground that gave the place its name has long since disappeared.

The most recognizable feature of Moreton is the large Market Hall, situated on an island in the centre of the High Street. The Market Hall, sometimes called the Redesdale Hall, is a Victorian building, though stylistically it looks more Georgian. 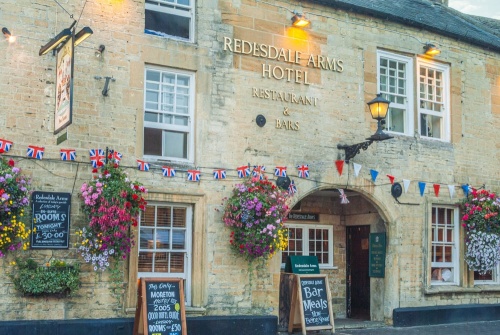 The nearest recognized attraction to Moreton is just a mile up the road at Batsford, where the Batsford Arboretum features a large collection of beautiful trees and shrubs ranged about the stately home of Batsford Park (private residence).

About 2 miles the other direction, up the London Road, is the Four Shire Stone, where the counties of Gloucestershire, Oxfordshire, Worcestershire, and Warwickshire used to meet. The Four Shire Stone is thought to be the inspiration for JRR Tolkien's Three-Farthing Stone in the Lord of the Rings.

Towards Stow is Chastleton House, a Jacobean manor house owned by the National Trust. Sezincote house and garden, and Snowshill Manor are also very close.

There is a very busy market in Moreton on a Tuesday, and as a result, traffic through the centre of the town can slow to a crawl on Tuesday mornings. There is free parking on High Street, but spaces are at a premium, so your best bet may be the paid parking lot on Station Road, signposted from the High Street.

About Moreton in Marsh
Address: Moreton in Marsh, Cotswolds, Gloucestershire, England
Attraction Type: Town
Location: At the junction of the A429 and A44 5 miles north of Stow on the Wold
Location map
OS: SP2031
Photo Credit: David Ross and Britain Express

Nearest Accommodation to Moreton in Marsh:

More self catering near Moreton in Marsh

More Hotels near Moreton in Marsh

More bed and breakfasts near Moreton in Marsh