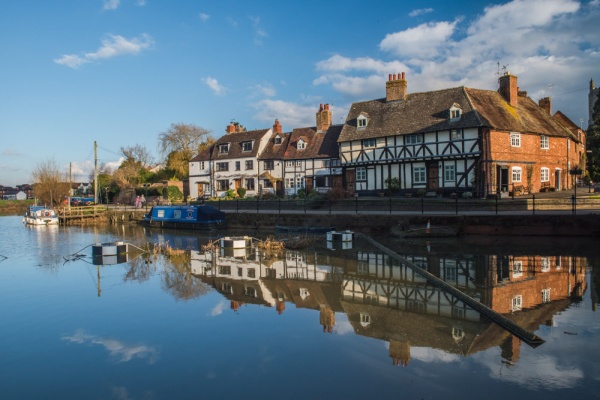 Summary
Tewkesbury is a historic market town at the confluence of the Severn and Avon rivers, with a superb abbey church. Site of the final, decisive battle of the Wars of the Roses.

The town of Tewkesbury wears its past well; despite its focus as a modern shopping centre for the surrounding region, you are never far from reminders of Tewkesbury's colourful heritage. I don't know if there's ever been a comparison survey to find the town with the highest proportion of timber-framed buildings in England, but if such a survey ever took place, Tewkesbury would surely be in the running for honours! 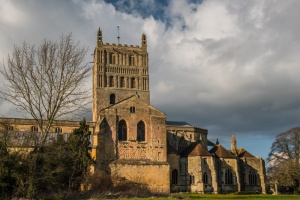 Among these historic buildings is the Bell Inn, just outside the Abbey grounds. The Bell is reputed to have surviving timbers from the 13th century, and wall paintings in the dining area date from that period. Almost as old is the Royal Hop Pole, which dates from the 14th century. The Hop Pole was mentioned by Charles Dickens in "The Pickwick Papers".

A few steps from the Bell Inn is Abbey Mill, a restored 18th-century water mill, also known as Fletcher's Mill, for a former owner named Abel Fletcher. Fletcher was a Quaker who was the inspiration for the miller in Dinah Craik's popular novel, 'John Halifax - Gentleman', published in 1856.

There has been a mill here since 1190 when the monks of nearby Tewkesbury Abbey had a channel dug from the River Avon to power a mill to grind grain. The channel is known as Mill Avon, and extends from the Avon to the Severn at the southern edge of Tewkesbury.

The 12th-century mill was rebuilt in 1793 with 4 wheels. It remained in operation until 1920, but could not compete with the larger and more modern Healing's Flour Mill, further north along the channel. That mill, in turn, went out of business and now stands empty.

On the High Street is the Black Bear Inn, built in 1308 and the oldest inn in Gloucestershire. A few steps from the inn is King John's Bridge. Tradition suggests that the first bridge across the Avon was built by King John in the early 13thcentury.

Documents from 1205 show that the bailiff of Tewkesbury was given wood from 2 oaks to build a bridge. The king is also said to have given the tolls from Wednesday and Sunday markets to keep the bridge in good repair. 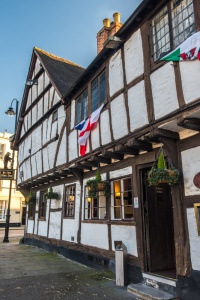 Tewkesbury is a very enjoyable place to stroll about, taking in the wonderful historic architecture, and peering down the 30 medieval alleyways that open at regular intervals off the main streets.

On Barton Street, just a few steps from The Cross and High Street, is a small local museum, housed in an attractive timber-framed Tudor house. The museum covers 5000 years of Tewkesbury History, with exhibits as diverse as Roman coins, medieval tiles, and 19th-century fairground models.

There are a large number of archaeological finds from excavations at Holme Hill, and a finely carved 12th-century cross from Mitton. This being Tewkesbury there is a large display on the Battle of Tewkesbury, and also displays on the traditional Mop Fair, held annually for servants to find new employment.

On Church Street, very close to The Cross, is another 'black and white' building, housing the tourist information centre and heritage centre. Audio-visual displays help you learn about the town through the eyes of Mr Bartholomew Read, a 17th-century hat seller who lived in the building.

The 17th-century building has been beautifully restored and is now a family-friendly way to introduce visitors and locals alike to the rich heritage of Tewkesbury. The Centre runs regular events for children, with discovery trails and the chance to make your own coat of arms.

Tucked into Abbey Lawn Cottages, a row of picturesque 15th century timber-framed cottages just steps from the Abbey churchyard, is a fascinating museum of natural history founded in memory of naturalist John Moore. The museum features displays of birds and animals native to local wetlands, woodland, and countryside.

Beside the John Moore Museum is Merchant's House, a beautifully restored 15th-century shop and home. The house consists of a hall, workshop, shop, and a single bedroom, and behind the house is a small garden that provided the residents with food and medicine. Merchant's House features an ongoing programme of 'living history' events, with costumed actors bringing the past to life in the surroundings of the picturesque medieval house. 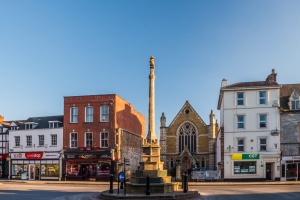 The John Moore Museum also runs tours of the Old Baptist Chapel, located down a narrow alley across the road. The Chapel began as a hall house in the 15th century. In 1623 it was given to a local Baptist group as a meeting place.

The Baptists, like other non-conformist groups, had to worship in secret. However, after the Act of Toleration in 1689 they were able to worship openly. they established a burial ground at the end of the alley, and among those buried there are descendants of William Shakespeare.

The Chapel was rebuilt in 1720 with a separate minister's room, a baptistery and tall windows to let light in from the narrow alley frontage. The Chapel is small, but a delight to visit, and it is well worth arranging a guided tour through the John Moore Museum.

The crowning jewel of Tewkesbury is its superb abbey church, which is every bit as impressive and worth a visit as many a more widely known cathedral.

Tewkesbury Abbey is quite unusual in one respect; you can actually get quite good views of it. Many major churches in the UK are quite difficult to see clearly as you approach. Often the surrounding buildings encroach on the church site and obscure the building itself.

Such is not the case at Tewkesbury Abbey. Green fields creep almost to the Abbey itself, with the result that excellent views of the church can be had. And that is no small thing, as the quite remarkable medieval architecture can be more easily appreciated. 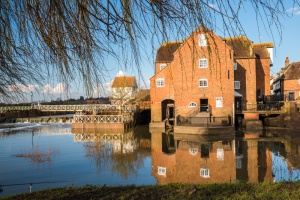 The Abbey was founded in 1102 by Robert FitzHamon, cousin of William the Conqueror, and FitzHamon's remarkable chantry chapel can be seen in the south aisle of the abbey church. Tewkesbury is blessed with an extraordinary collection of exceptional chantry chapels, including those of several members of the De Spenser family, and the truly magnificent Beauchamp Chapel, built by Isabella, Countess of Warwick, for herself and her two husbands, both Earls (of Warwick and Worcester).

The vaulting of the nave is quite superb, as are the Norman drum pillars between the nave and aisles.

The Battle of Tewkesbury

The green fields beside the Abbey of Tewkesbury are now empty, save for playgrounds in one corner. Where children now play, the fields were once wet with blood, and the air filled with the sounds of conflict; the area is known today as Bloody Meadow, and on this peaceful spot in 1471 the armies of Edward IV met forces led by the Duke of Somerset on behalf of Queen Margaret. The result was a decisive victory for Edward, and a terrible blow to Lancastrian hopes. See our British Battles section for more about the background and consequences of the Battle of Tewkesbury. 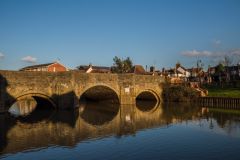 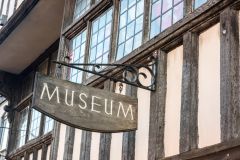 More self catering near Tewkesbury

More bed and breakfasts near Tewkesbury

Self Catering near Tewkesbury