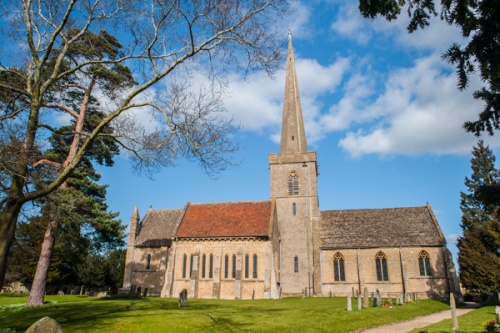 The parish church of St Giles is one of Bredon's major attractions. There may have been a Saxon church here, but any traces of that structure have disappeared. The current church dates from between 1190 and 1350. St Giles' boasts wonderful stained glass and medieval tiles in the sanctuary. See details below of other notable features of the church interior, including the final resting place of an unnamed Crusader's heart, and a 14th-century coffin lid.

It seems likely that the impressive medieval church stands on the site of a Saxon church. we do know that there was an early monastery here, but exactly where it was located is a mystery. The first monastery was founded before AD 780 when King Offa of Mercia gave estates in Worcestershire to the monks of Bredon.

Sometime around AD 841, the monastery was destroyed by marauding Danes, the monastic treasure was looted, and the monks either killed or fled in terror. Around 1180 the Normans began a completely new church, and work continued on and off until the mid-13th century. It is possible that the same team of masons worked on Tewkesbury Abbey and St Giles church

The spire is one of the highest in the region at 161 feet, and certainly one of the most attractively proportioned. The spire is an easily recognised local landmark, and was mentioned in a poem by AE Houseman called 'Summertime on Bredon', where he wrote:

In summertime on Bredon
The bells they sound so clear
Round both the shires they ring them
In steeples far and near
A happy noise to hear. The most impressive of the many numerous memorials in Bredon church is this imposing memorial to Sir Giles Reed (d 1611) and his family in the north aisle. On the memorial is a verse calling Sir Giles ‘a worthy Squire ?hardie, and wise, and just?'.

The monument is built of black marble and alabaster and is rightfully considered one of the finest early 17th-century monuments in the country. Descendants of Sir Giles founded the picturesque almshouses which still offer accommodation to elderly residents of Bredon. Also in the north aisle is an unusual memorial marking the burial place of a crusader's heart. To the left is the knight's shield, from which his hands emerge, holding his heart. It was common that knights who died on Crusade in the Holy Lands would have their hearts sent home to England for burial, while their bodies remained behind.

This tomb, which dates to about 1290, is much larger than most similar Crusader heart monuments. Beside it is another tomb niche set into the wall, topped with a worn stone slab. This is called The Abbot's Tomb and may commemorate an early Abbot of St Peter's Priory who served between 1180-1236.

The south aisle, later named The Mitton Chapel, is a wonderful example of Early English style, with double lancet windows and detached shafts of Purbeck marble. On the sanctuary steps are beautifully preserved medieval floor tiles.

On the north wall of the sanctuary is a medieval Easter Sepulchre. It was damaged by Cromwell's soldiers in the Civil War but has been beautifully restored, with a heavily decorated arch bursting with crockets and finials.

Both north and south windows in the chancel have panels of medieval stained glass, including early 14th century panels depicting St Mary of Egypt and St Mary Magdalene. Also in the chancel, hidden by a carpet, is a wonderfully preserved 17th-century memorial brass to Bishop John Prideaux.

I've been to St Giles several times and each time I come away moved by the sheer beauty of the building and the wealth of historic features. The Reed memorial is a fabulous piece of 17th-century craftsmanship, and the heart tomb is fascinating. The church is normally open daylight hours. Medieval altar tomb in the chancel Detail from the crusader's heart burial