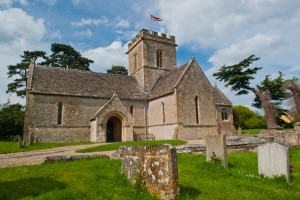 The church of St Mary's stands on the southern edge of Meysey Hampton, looking across fields. We know exactly when the church was built, for records indicate that the Bishop of Worcester consecrated it in on 9 June 1269. The layout is cruciform (in the shape of a cross) with a central tower, nave and chancel of equal length, and north and south transepts.

Breaking up the symmetry somewhat is a north chapel and small south porch. The original Early English design was heavily altered in the 14th century in Decorated fashion. In the north east corner of the churchyard is a small stone watch-house, a product of the 19th century, when churchyards had to be guarded against the depredations of body-snatchers.

Just inside the Victoria south door is the font, probably Early English, but very obviously restored and recut. The west window is a double lancet in Early English design, with Victorian stained glass. Also by the door is a large wooden alms box, made sometime before 1547. 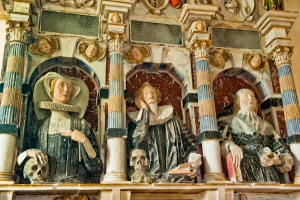 The lectern is worth noting. It acts as a memorial to a local woman named Christian Cripps, who died in 1613. The lectern retains its original chain, used to secure the Bible against theft. In an age when books were rare and very valuable, it did not pay to leave them unsecured!

The north transept is partially blocked by the organ and used a storage area, but the south transept is quite another story. The transept is dominated by a wonderful painted memorial to a local doctor and surgeon named James Vaulx.

The physician leans upon a skull, a symbol of mortality. He is flanked by his two wives; Editha Jinner on his right, and Phillipa Horton on his left. The latter has no skull, an indication that she was alive when her husband died. The memorial was erected by Francis Vaulx, eldest son of James and Editha, in 1630.

To the left of the south window is an inscribed tablet to one of Vaulx's patients, Margaret Griswald. The inscription dates to 1625 and was repainted in 1750. Opposite is a memorial to Rev George Clarke, a former rector. His daughter Charlotte married John Keble, founder of the Oxford Movement, and Charlotte's sister Elizabeth married Keble's brother Thomas. 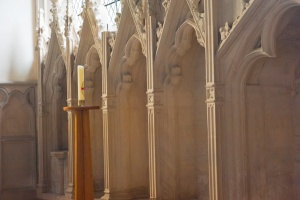 Step carefully into the chancel - carefully because the centre of the step up to the chancel has been worn into a deep indentation by seven hundred years of worshipper's feet. The chancel roof is typical 13th-century work, with carved wooden bosses.

Against the north chancel wall is a marvellous founder's tomb built about 1300, with an ogee arch decorated with traditional ball-flower carvings.

A triple hagioscope is set within the tomb recess, allowing a view of the altar from a side chapel. A 14th-century triple sedilia stands on the south wall, with a piscina of similar date. The altar table and a pair of carved oak chairs date to 1639. Fragments of medieval glass are set in the chancel windows; the south-west window shows St Michael weighing souls. 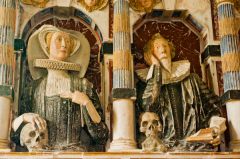 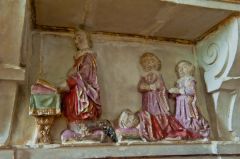 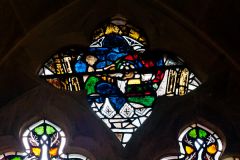 More self catering near Meysey Hampton