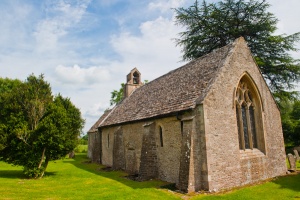 This delightfully simple rural church consists of a Norman nave joined to a 13th-century chancel by way of a stone screen, a 14th-century bellcote and a rebuilt south porch of similar age.

St Mary's church is located about two miles from the centre of Ampney St Mary village, across the busy A417 Fairford to Cirencester road. Why so far? The answer probably lies in the devastation of the Black Death. It seems likely that the entire village was evacuated at the time of the Death around 1350 and most villagers resettled on higher ground over a mile away to the north east.

The last few houses near the church fell into decay when the old coaching road near the church fell out of use in the 18th century. We do not know how much use the church received after the Reformation, but in 1877 the parish was united with nearby Ampney St Peter and St Mary's was allowed to decay.

The building became covered with a growth of ivy. When the ivy was finally cleared from the church in 1913 it was dubbed 'The Ivy Church', a name that stuck. The large church sign at the edge of the neat churchyard still proclaims 'The Ivy Church'.

In the churchyard is the worn base of a medieval cross, but the shaft and cross head are long gone. 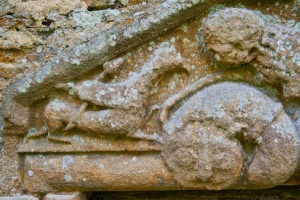 THE NORMAN TYMPANUM
The first historical feature you see on approaching the church is the blocked north doorway, with a marvellously carved lintel stone depicting fearsome beasts.

The carving shows a lion, representing Good, defeating a two-headed serpent, representing Evil, while a Griffin faces the lion. This is thought to be the only such scene in England. The serpent is particularly striking; the faces were perhaps trying to look fearsome, but in fact, look rather smug and satisfied.

In the south porch is a peculiar recess. The church guide suggests that candles would have stood there during services, and worshippers would have lit their own candles before returning home from church services. The south door is 14th century and retains its original handle.

THE WALL PAINTINGS
The interior of the church, particularly the nave, is covered in fragments of medieval murals. The paintings mostly date from the 13th and 14th centuries and were lost for centuries beneath layers of whitewash. The earliest painting is on the north wall of the nave, where you can make out red roses and a wall. Also on the north wall is a large figure of St Christopher carrying the Christ child. 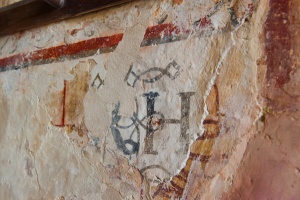 To the west of St Christopher is a figure of St George slaying the dragon. The more faded paintings on the south wall are particularly interesting, for they appear to show scenes from daily life. There are domestic implements, and a wheelwright checking a wheel spoke for alignment. In the upper splay of the north-west nave window is a very humorous human face.

To the west of the main south door is a small Norman window cut from a single block of stone. Also near the doorway is a Norman font on its original base. The large west window is 14th century, with the flowing tracery common to that period.

The nave is separated from the 13th century chancel by a heavy stone screen, a relative rarity in a country church. The screen is 14th century and you can clearly see where a stall rested on the south side of the screen. The east window is 13th century, but with colourful Victorian glass.

OUR VERDICT
St Mary's is a wonderful country church; despite the sound of traffic on the A417 there is a wonderful sense of peace and serenity. The historical features make this one of my favourite Cotswold churches. 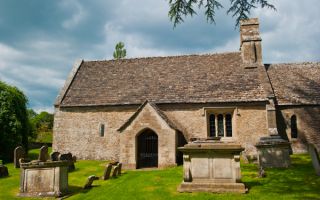 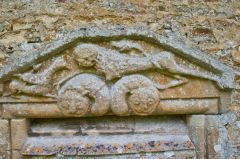 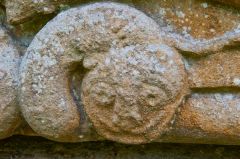 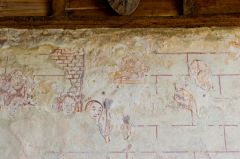 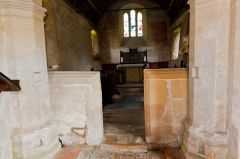 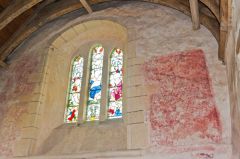