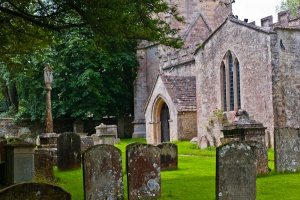 The oldest part of Holy Rood is the north wall of the nave, where you can still see evidence of late Saxon or early Norman stonework. There are a pair of ancient windows with wide splays at the east and west end of the nave, and a blocked north door of similar age. The chancel was rebuilt around 1180 when the lovely Transitional Norman arch was added. The chancel was altered again in the late 13th century and transepts were added. The Perpendicular west tower was built in the 15th century when the current roof was built. 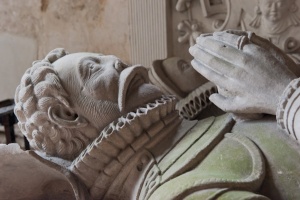 A new east window was set inside the earlier Decorated window arch. In the south-east angle of the chancel is an interesting late Norman pillar piscina. Though not unique, it is fairly unusual to find a free-standing piscina of this date.

On the east wall of the chancel are plain tablets to members of the Pleydel (or Pleydell) family, long-time lords of the manor at Ampney. Note that several of the monuments actually state the hour of death.

In the vestry is a memorial to Viscount Downe, a member of the Pleydell family. Downe was a professional soldier and served at the court of George II until his death at the Battle of Kampen in 1760.

THE LLOYDE TOMB
In the north transept is an orate memorial to George Lloyde, of Ampney Park, who died in 1584. The carving on Lloyde's effigy is quite marvellous, with every curling hair on his head outlined beautifully. The figure of his wife is equally well-crafted but is harder to clearly make out due to railings in front of the tomb. The beautifully decorated tomb canopy was discovered in the cellar of the manor by later owners and restored to the church. Lloyde's son sold the manor to the Pleydell family in 1594.

Also in the north transept are visible remains of wall paintings, including depictions of St Helena, St James, and St Paul, as well as an unidentified archbishop. Also painted are coats of arms to local families, including the DeMareys, and Robert FitzHamon, founder of Tewkesbury Abbey. Among the paintings is a likeness of Edward the Confessor, one of only two known depictions of the saintly king in an English parish church (the other is at Faversham in Kent). 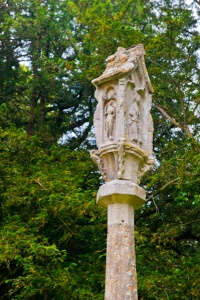 The font is early Norman, and it stands atop an inverted modern font bowl, acting as a base. The pulpit is 15th century.

THE CHURCHYARD CROSS
An ancient medieval cross stands on a tiered plinth in the churchyard, near the path to the south porch. At first glance, the ornate cross head seems modern, perhaps Victorian, for it is in such fine condition that it is hard to believe it is original.

There is a reason for this; the crosshead was hidden for several centuries in the rood-loft inside the church, probably to keep it safe from Puritan depredations in the post-Reformation era. The cross was rediscovered in 1840 and replaced in the churchyard in 1860. 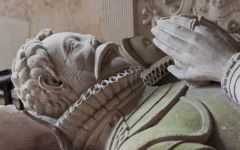 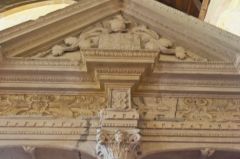 More self catering near Ampney Crucis