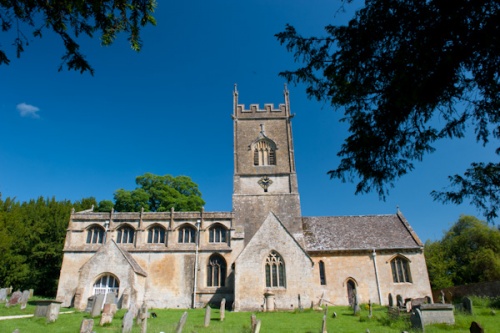 The village of Withington straddles the infant River Coln. An attractive pub stands beside the river, while on the west bank the ground rises to form 'the upper end' of the village. Here, near the manor house, stands the large Grade I listed church of St Michael and All Angels, an imposing building dating to the 12th century. The history of the church goes back much further, however.

A Saxon monastery was established here in AD 674, possibly near the site of the present church. The monastery was ruled by abbesses until AD 774, when it was granted to the See of Worcester. It seems possible that after the monastery fell out of use the Bishops of Worcester continued to maintain the church for the use of local people. We know that there was a priest on the manor at the time of the Domesday Book in 1086. 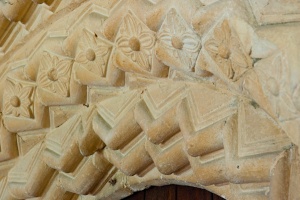 Withington church always seems to have occupied a position of importance locally; it acted as mother church to chapels at Dowdeswell, Owdeswell and Little Coulesbourne.

Residents of Dowdeswell continued to be buried at Withington long after the former obtained parochial status. In one of those strange arrangements that only the English church seems to come up with, the rector of Withington was exempt from visits by the archdeacon, and held his own court, judging moral offences and executing the probate of wills.

The oldest part of St Michaels dates to about 1150, and the architecture is Transitional Norman to Early Perpendicular (c. 1400). The original Norman church consisted of a nave, chancel, and tower. The nave was raised in the 13th century, the chancel enlarged, a south porch added, and the tower enlarged. A south transept chapel was built in the 14th century, and a large clerestory inserted in the 15th century.

There are two Norman doorways. The south doorway, through which you enter, is a wonderful example of Norman work, with three orders of carving protected by a hoodmould punctuated with dragon's head carvings. The decoration is marvellous, with crisp and clean sunflower bosses and zig-zag patterns. The blocked north doorway is sedate by comparison, with chevron mouldings and an undecorated tympanum. 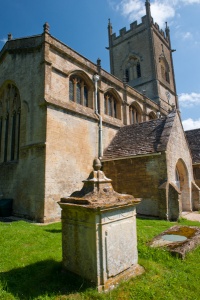 One very odd feature of the nave is that all the light comes from the clerestory windows; all the original Norman window openings have been blocked up, which presents a quite peculiar appearance at first glance. To the west of the south door, half-hidden behind a curtained area, are a pair of interesting wall monuments.

On the south wall, and by far the most ornate memorial, is a painted Jacobean monument to Bridgett and John Howe (d. 1642) with their 8 children. This is a wonderful monument in classical style, with the figures beautifully carved and looking suitably pious.

Facing the Howe memorial on the north wall is a monument to Gilbert Osborne (d. 1656), flanked by a pair of very serious-looking angels. Another Jacobean feature is a small brass plaque to Sybill Knollis (d. 1614). She was renown, we are told, 'for her piety, prudence, chastity, and for being a faithful wife'.

The font is 15th century. The pulpit is a modern replacement for a Jacobean pulpit which was broken up to make an oak table in the vestry.

Set into the south wall of the nave is a canopied tomb recess. This is ornately decorated with restored pinnacles flanking a canopy decorated with ball-flowers. The church guidebook suggests that this may have been an Easter Sepulchre. Within the recess is a worn tombstone which has been brought in from the churchyard. The tombstone tells a sad tale; one that would have been only too common in the 17th century. The inscription reads

"Here lyeth the body of Honest Jhon [sic] Stockwell who dyed of the plague the 24th day of September and was buried the 25th day Anno Domini 1665."

The south chapel is almost entirely 14th century, with a Decorated window in the south wall. 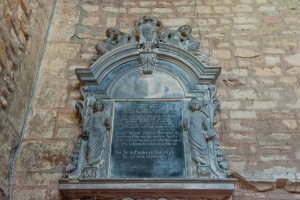 The chancel is interesting; the north window tapers to a point and is decorated with an inner pointed arch decorated with chevrons. Beneath the sill is an odd recess built to hold a small lead cistern for collecting rainwater from exterior gutters. The water would be used to wash communion vessels. This type of recess is common in monasteries but rarely found in parish churches, where a straightforward piscina is much more common.

The priest's door on the south wall is Norman. On the south side of the chancel is a very worn effigy of a priest, possibly dating to the 13th century. It was thought at one time that this effigy originally lay within the nave tomb recess, but a simple exercise in measurement shows that it won't fit within the recess.

There are five mass dials; three under the south transept window, one on the south wall of the nave, and another to the left of the porch.

St Michael's is a wonderful large church, full of historic interest. It is normally open during daylight hours. A few miles over the fields to the east lies Chedworth Roman Villa, which is well signposted from the village. 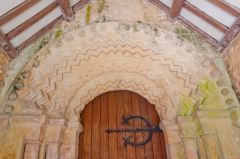 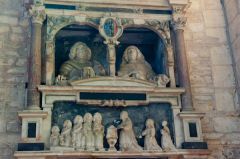 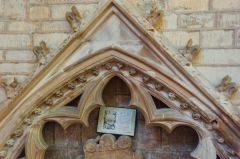 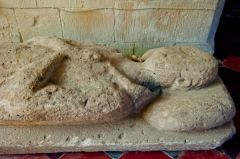 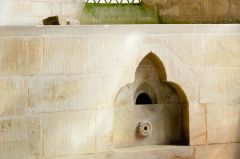 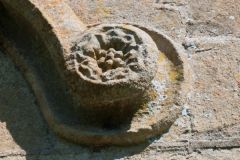 About Withington
Address: West View, Withington, Cotswolds, Gloucestershire, England, GL54 4BG
Attraction Type: Historic Church
Location: Withington is just off the A40 at the A436 junction. The church is on the north side of the village.
Website: Withington
Location map
OS: SP030156
Photo Credit: David Ross and Britain Express

More self catering near Withington

More bed and breakfasts near Withington