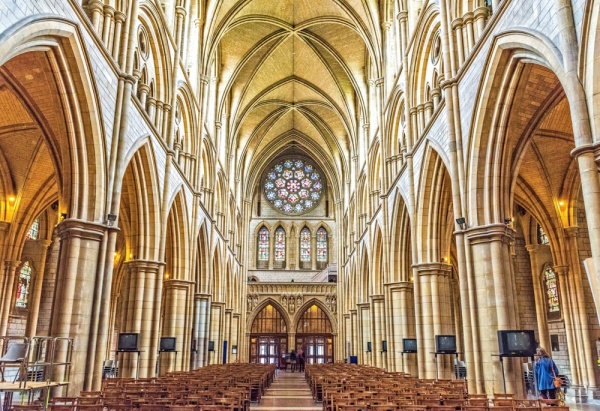 Until 1876 Cornwall was a part of the Devonshire diocese, with its see at Exeter Cathedral. Supported by Prime Minister Benjamin Disraeli, a new diocese of Cornwall was created with Truro chosen as the new cathedral city. Pearson's new cathedral was the first to be built in England for over 800 years; since Salisbury Cathedral in 1220 (technically-speaking, Sir Christopher Wren's St Paul's Cathedral was the first, but that was a rebuilding of an existing cathedral destroyed by fire). 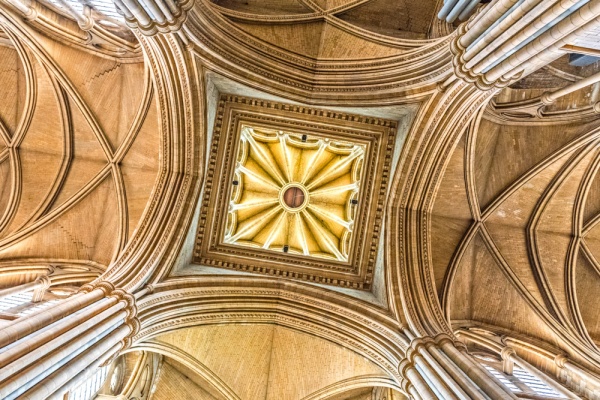 A Church Within a Church

The new cathedral was built on the site of an existing Tudor parish church dedicated to St Mary, in the centre of Truro. It was assumed that the existing church would be demolished and a new cathedral raised on the site, however, Pearson surprised everyone by designing a 'church within a church'.

Most of the existing church was torn down in 1880, but Pearson retained the south aisle to serve as the parish church and incorporated the old church seamlessly into the new building. The result is simply breathtaking. The old church is now St Mary's Aisle, with a wagon roof design decorated with bosses commemorating local people and others with a Cornish connection.

The new cathedral's resemblance to Lincoln Cathedral is obvious, and understandable, for Pearson also served as chief architect for Lincoln, and the first Bishop of Truro, Edward Benson, previously served as a Chancellor at Lincoln. Pearson was experienced in cathedral architecture, having also worked on restorations of Canterbury Cathedral, Rochester Cathedral, and Westminster Abbey.

The foundation stone was laid in 1880 by the Duke of Cornwall, later to become King Edward VII. 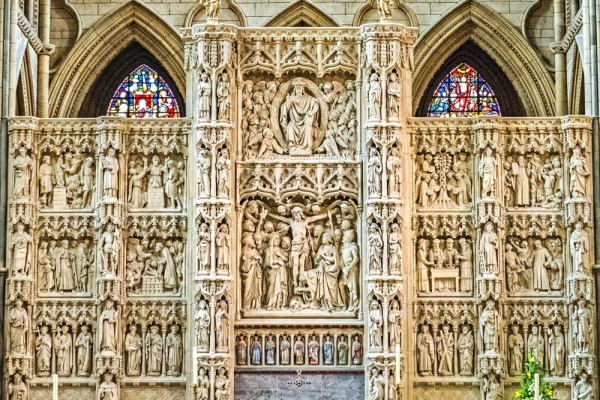 The superb reredos by Nathaniel Hitch

Beginning construction in 1880 was a remarkable act of faith, for money to complete the structure had not yet been raised. A public appeal was launched across Cornwall, and the donations poured in. Every cost was met by public subscription, and the first section of the cathedral was consecrated in 1887. JL Pearson died in 1897 and so did not see the completion of the central tower in 1905 and the two flanking towers in 1910. The work was finished by his son Frank, who took over his father's architectural practice.

The cathedral windows are by the famous Victorian firm of Clayton & Bell of London, and are considered the finest example of 19th-century stained glass in England. The stained glass follows a timeline telling the story of the Christian church, starting from the birth of Christ and ending with the construction of Truro Cathedral.

Four different types of stone were used in construction; the exterior is made of Mabe granite, the interior of St Stephen's granite, with Bath stone and Polyphant stone used for the soaring shafts and for decorative detail.

Perhaps the highlight of the cathedral interior is the stunning reredos behind the high altar. The ornately carved reredos was the work of sculptor Nathaniel Hitch, who also sculpted the tympanum panels decorating the west porch. 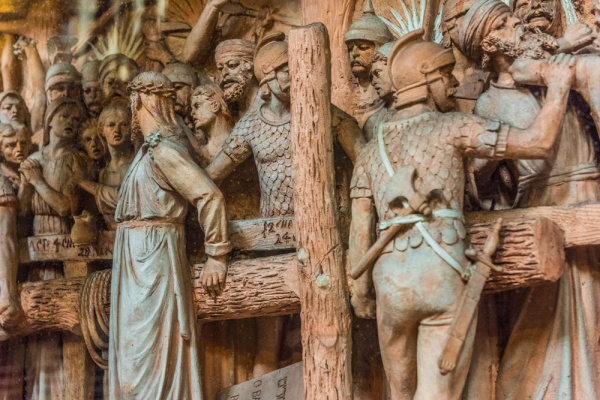 In the north choir aisle is The Tinworth Panel, a terracotta panel sculpted by George Tinworth of the Doulton China Company. The panel was exhibited at the Royal Academy in 1880 and shows Christ on his way to his crucifixion. On the extreme right of the scene is a depiction of Pontius Pilate, whose head is said to have been modelled on the Prince of Wales. The rider at the extreme right of the panel was modelled on General Gordon (Gordon of Khartoum).

Several historical monuments were rescued from St Mary's church before it was partially destroyed. Among these is a superb monument to John Roberts of Truro, who died in 1614. Roberts and his wife Phillippe (Philippa) are shown lying down, he holding a staff and she leaning on one elbow. The effigies are beautifully painted. Nearby is a gilded wall plaque to Francis and Anne Burges, dated 1714. 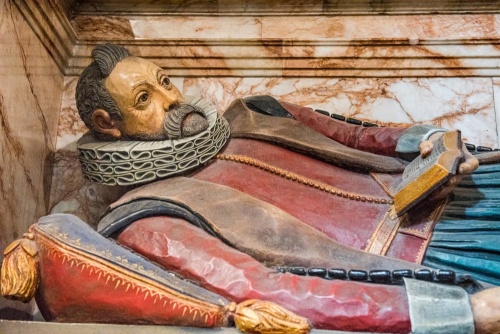 The new cathedral needed an organ to match the splendour of the Victorian interior. Truro's superb organ was designed by Henry 'Father' Willis, the premier organ builder of the 19th century. It is considered one of the finest instruments in the world. Rather than being added to the cathedral as an afterthought, it was built into the cathedral as it was being constructed, and was designed to work in perfect harmony with the spacious cathedral interior.

The result is almost acoustically perfect. There are free lunchtime concerts every week from Easter through October so you can hear this magnificent musical instrument in the space it was designed for.

Truro Cathedral is open daily to visitors. As of this writing, there is no entrance fee, but a donation would be greatly appreciated. The cathedral is well signposted and is easy to reach from anywhere in central Truro. There is no dedicated parking area (at least none that our family could find) but there are several paid parking areas within a short walk. 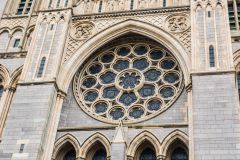 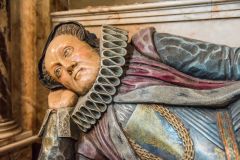 More self catering near Truro Cathedral