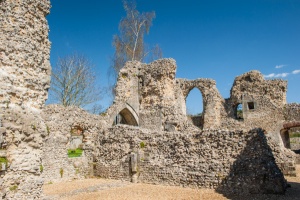 The principal residence of the Bishops of Winchester during the medieval period and beyond, Wolvesey Castle was an extensive keep and bailey castle built about 1100 on a site in use during the Anglo-Saxon period. We know that Bishop Aethelwold (963-984) had a timber hall and chapel to the north of the present castle, but nothing of that Saxon range of buildings has survived.

Around 1110 Bishop William Giffard erected the first stone building here. Only a small section of his hall remains, near the later 17th-century palace. The early Norman building was extended and "modernised" by the powerful Henry of Blois, Bishop of Winchester during the Civil War between Queen Matilda and King Stephen (1135-48).

The result was not so much a castle as a palatial residence, suitable for one of the richest and most influential men in England. Within an enclosing wall was a complex of buildings surrounding an impressive great hall, including barns, stables, a wool store, and prisons. The hall was where Henry entertained and carried out his administrative duties, and at 27 metres in length, it must have been a truly impressive place.

One of Henry's new 'mod-cons' was a piped water supply, one of the earliest examples in medieval Britain of a complete water system, with two well-houses, a settling tank, an ornamental tank, a series of troughs and pipes, and a latrine block that emptied into a moat.

Henry kept extending the palace throughout his lifetime, adding a second hall, a keep and tower, and a pair of imposing gatehouses. Only the foundations of one of these gatehouses survive.

Aside from providing a grand entrance into the castle complex, the gatehouse was later used to store the Pipe Rolls, the official records of the Bishop of Winchester's estates. These rolls provide an invaluable insight into the medieval period. They were held in the castle gatehouse from 1370, but are now in the Hampshire Record Office.

Over the next 5 centuries the palace buildings were repaired and renovated several times, the essential structure and main buildings at Wolvesey were all begun during Henry of Blois' lifetime. 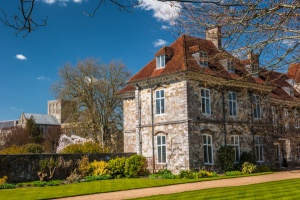 Henry, who was also Stephen's brother, had to take refuge within Wolvesey at one point in the conflict, and withstand a short siege.

The castle saw many an important visitors over the years. In 1403 a great feast was held to celebrate the wedding of Henry IV and Joan of Navarre, and we know from the historical records that the guests dined on rabbit, venison, swan, woodcock, partridge, plover, kid, snipe, and quail, before finishing their feast off with fritters, custards, and cream of almonds and pears in a syrup. All these delicacies would have been prepared in the castle kitchens, the walls of which still stand.

The last great moment in Wolvesey's history came on 25 July 1554, when Philip II of Spain and Queen Mary of England had their wedding breakfast here before proceeding to Winchester Cathedral for the wedding ceremony.

In 1680 the castle was demolished in order to build a new palace in the then-popular Baroque style. That palace can be seen directly beside the ruins. All that remains of Wolvesey itself are ruined walls and the chapel, which was incorporated into the new palace.

Across the road is Winchester College public school.

The castle is in the care of English Heritage and is normally open without charge during daylight hours. 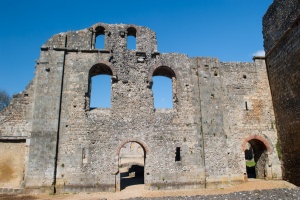 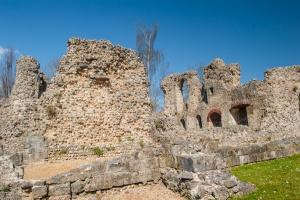 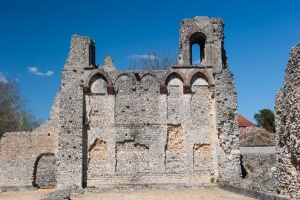 A ruined wall in the great hall

More self catering near Wolvesey Castle