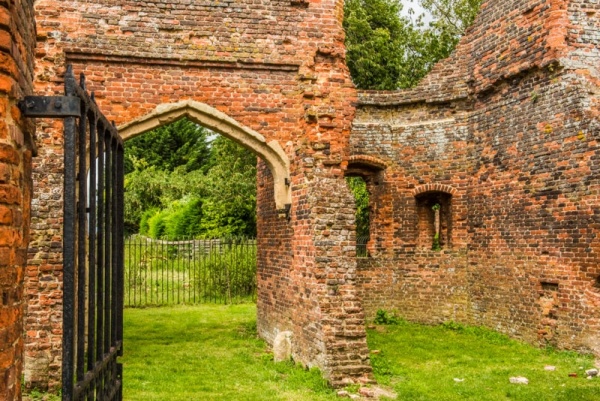 A farm field within sight of Luton Airport is not where you would expect to find a medieval castle, but Someries Castle is surprising in many ways. Firstly, it isn't actually a castle, but an early 15th-century residence, and secondly, it is built of brick.

The 'castle' takes its name from William de Someries, whose moated manor house stood on or near this site in the 13th century. The magnate's residence we see today was built by Sir John Wenlock (1400-1471), who bought the Someries estate sometime shortly after 1430.

Wenlock was a soldier, statesman, and Knight of the Garter. He served as an MP, Speaker of the House of Commons, and as the High Sheriff of Bedfordshire and Buckinghamshire. He died at the Battle of Tewkesbury in 1471 while fighting for the Lancastrian cause. 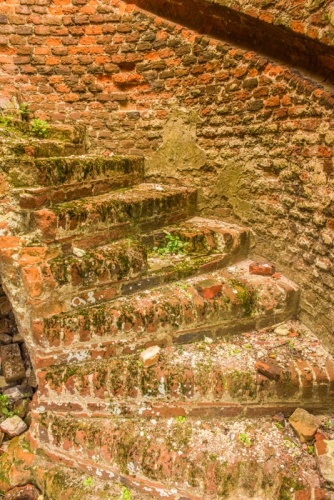 Tradition says that he was killed by his own commander, the Duke of Somerset, who blamed Wenlock's indecisiveness for the Lancastrian defeat. Another strand of the legend says that Wenlock survived the battle and that he and his wife buried another corpse in his place and lived several more years in secrecy.

Wenlock has been dubbed 'the prince of turncoats', for his changes of allegiance during the Wars of the Roses. He fought in six major battles during the conflict.

Lord Wenlock's mansion is considered one of the earliest residential uses of brick in England. We know that the Castle had at least 25 rooms in use by 1606, and 23 hearths were recorded in the 1671 Hearth Tax Returns. Unfortunately, the Castle was never finished, and much of the building was pulled down in 1742.

Why were the gatehouse and chapel not pulled down as well? They may have been left to provide a romantic folly, part of the landscaped grounds of Luton Hoo, to which Someries had belonged since 1724.

Existant remains include the gatehouse, built around 1448, and a chapel, erected in the 1460s. 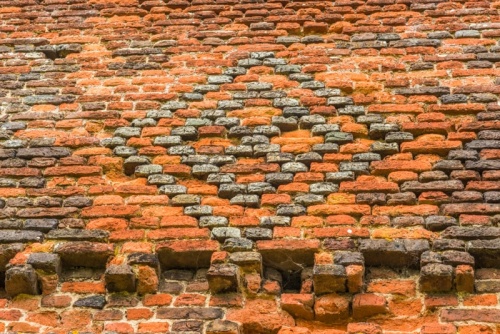 Decorative brickwork on the chapel wall

After Wenlock died the estate passed to Thomas Rotherham, Bishop of Lincoln and later Archbishop of York. King James I visited Someries in 1605 when the Castle was owned by one of Rotherham's descendants.

Just beyond the castle enclosure are remains of a 16th/17th-century garden, perhaps laid out on the site of William de Someries 13th century fortified house. The 13th-century residence could still be seen in the Tudor period when the antiquarian John Leland visited and noted that the ruins of an 'old palace' were still visible. Leland also records that Anthony Grey, the eldest son of Edmund Grey, Earl of Kent, was buried in the chapel at Someries.

Why was the Castle built here? Though the site is very close to the urban sprawl of modern Luton and its airport, in the 15th century it was well away from the town and stood very close to a major road linking Luton and Kimpton. 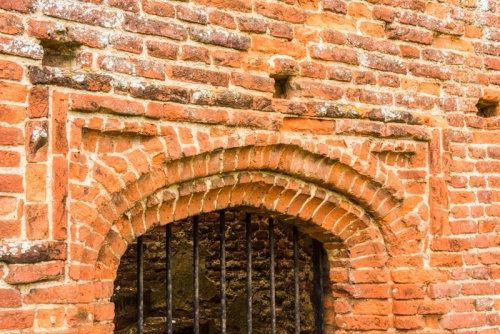 It is odd that Someries Castle's 'listed' status refers to it as 'unique' and one of the earliest brick buildings in England since brick was in use since roughly 1330. There is no question, however, that the elaborate brickwork we can see in the gatehouse is an impressive early use of the material. You can see the remains of a brick-built newel stair with steps supported on a spiralling barrel-vault.

A local tradition says that a brick handhold for the stair was, in fact, a 'whispering pipe' and that if you whispered into the bottom of the pipe the sound would be heard at the top. Another tale said that a secret underground tunnel lies under the castle ruins.

Though the gatehouse and chapel are roofless, their walls stand almost to full height and reach roughly 10m high in places. The gatehouse is built in the style of a castle barbican gateway, with bastions flanking an entrance passage that would have given access to a courtyard.

Extending from the north-east end of the gatehouse is the rectangular chapel, measuring roughly 16m x 5m. The chapel has a large Perpendicular Gothic window in the gable end. You can see where the north-west wing abutted the chapel wall but only fragments of the wing survive.

The garden area is on private land and is inaccessible, but is easily seen from the fence enclosing the chapel and gatehouse. The garden is enclosed in a rectangular earthwork some 100m x 80m, and within it is a square mound measuring 40m x 40m. The mound is quartered by raised walkways showing where flower beds once stood. The mound is only about 1m high. 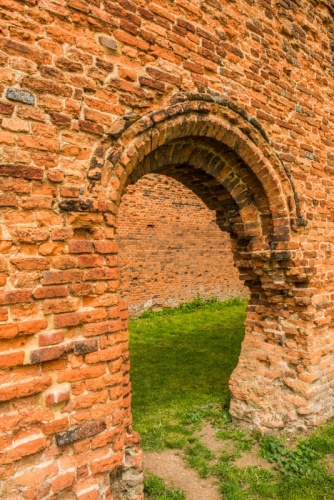 Sir John Wenlock's ghost is said to haunt the ruins of Someries Castle. Visitors have reported strange noises from the chapel and the gatehouse. One theory is that Sir John haunts the Castle because he was never able to finish it in his lifetime. Now, having said all that, we didn't hear any strange noises nor did we experience anything unusual whilst visiting.

From 1907-1909 author Joseph Conrad lived at the farmhouse next to the castle while working on his novel Under Western Eyes (published in 1911).

It isn't easy to find the castle. There are no signs until you get very close to the site. The easiest way is to take the B652 from Harpenden and turn left onto the lane to the hamlet of Peter's Green. From Peter's Green take Copt Hall Road west until it bends sharply to the left.

Do not take the turning, but instead take the rough lane straight ahead towards Someries Farm. Go slowly and mind the potholes! You will see the Castle ruins to the left just before the farmhouse. There is plenty of room for parking; just make sure to leave room for farm vehicles. 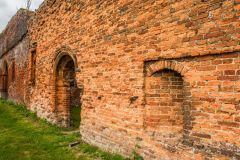 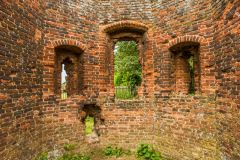 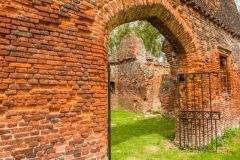 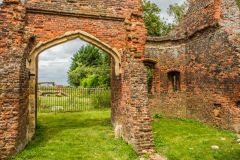 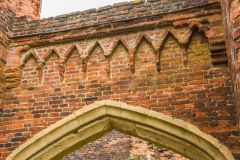 More self catering near Someries Castle