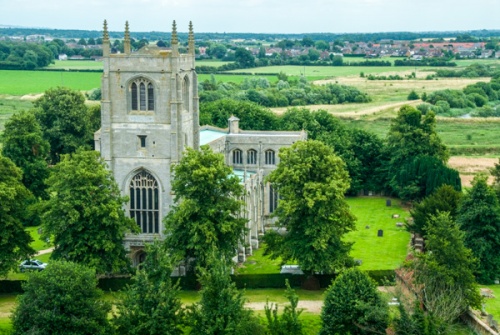 Immediately beside the red brick Tudor castle of Tattershall is the Perpendicular Gothic church of Holy Trinity. When Ralph Cromwell built Tattershall Castle around 1440 he created a small chantry chapel. This large church beyond the castle moat was begun around 1466 on the site of a smaller building founded in the 1430s.

The most easily noticed characteristic of Holy Trinity is its sheer size; the building is huge! Not surprisingly, then, there is a sense of light and spaciousness, in part because so much of the original coloured stained glass has disappeared and been replaced by clear panes of glass - more on that in a minute.

The transepts are particularly large. Of particular note in the interior is the stone pulpitum between the nave and chancel. This is ornately carved, with niches for statuary and altars. 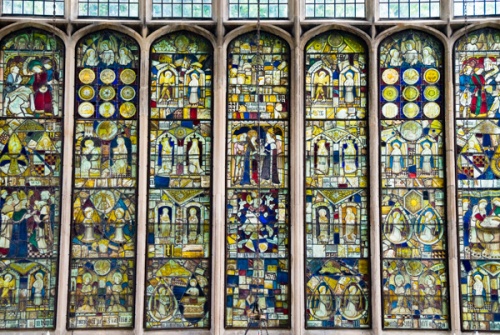 The chancel is airy and full of light. The very large traceried windows are filled with clear glass, save for the lower half of the east window, where all the remaining 15th century stained glass has been gathered together to create a solid expanse of colour. The tale of the removal of the stained glass reads like a suspense novel; it seems the Earl of Derby visited Tattershall and was much taken with the stained glass, and the lord of Tattershall was quite prepared to sell it to him.

The villagers were having none of that, and they refused to let 'their' glass be sold. They organized a protest for the day when the removal was scheduled to take place. The high-handed lord of the manor got wind of the protest and enlisted the aid of a neighbouring lord.

The men of the two lords came in the dead of the night and removed the glass without warning, so that the villagers awoke to find their church stripped bare. The Earl of Derby offered to replaced the stained glass with clear glass, and this was done in the nave.

As for the chancel, well, the steward of the lord of Tattershall was most adamant - that was the property of the lord and should not be touched. So the chancel was left without window glass for over a hundred years. As you might imagine, a great deal of damage resulted, and when the chancel finally did get its glass, it required a lot of work to repair the damage of a century's worth of wind and rain.

The church is profusely decorated with the emblem of Ralph Cromwell - a purse, indicating his station as Treasurer of the realm. By the font is a memorial plaque to Tom Thumb (d. 1620), who was only 18 inches (47cm) tall, and lived to the age of 101.

At the time of our visit, Tattershall church was experiencing a great deal of trouble with bats. The medieval brasses in the north transept were covered with protective sheets to avoid damage from bat droppings. Though this does have the effect of protecting the brasses from damage, it unfortunately does mean that they may not always be uncovered and viewable by visitors to the church. 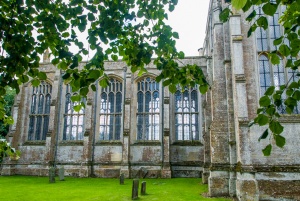 Exterior of the chancel 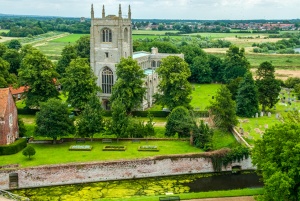 The church from Tattershall Castle 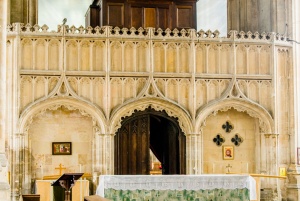 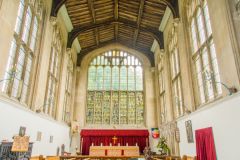 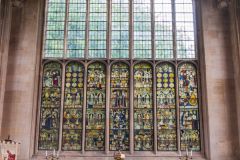 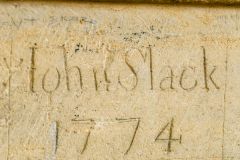 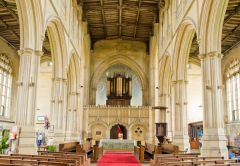 More self catering near Tattershall Church

Self Catering near Tattershall