HERITAGE HIGHLIGHTS:   The only 8-sailed mill in Britain 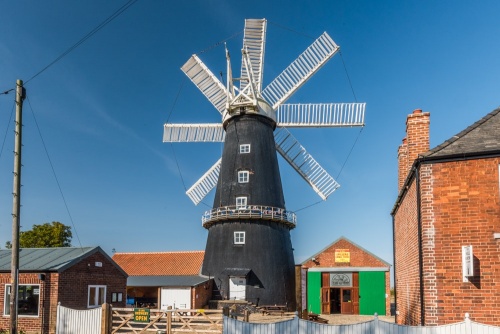 The distinctive outline of Pocklington's Mill in the Lincolnshire town of Heckington is unique in all of England. The mill is the only surviving eight-sailed mill in the country. It was rescued from destruction in the 1950s and restored in 1985 by Lincolnshire County Council. It is now operated by local volunteers.

The mill is known locally as Pocklington's Mill after John Pocklington of Wyberton, who was not, as you might expect, the builder, but instead, he was the man who restored the mill in the late 19th century after the storm damage.

The tower of Heckington Mill was built in 1830 by Michael Hare and his wife Anne, using money left to them by his father and uncle. The tower was unused for three years before Michael Hare paid a millwright from Gainsborough named Edward Ingledew to install the machinery and sails. Ingledew installed 'only' five sails, driving three sets of grindstones.

It seems that Michael Hare had no intention of being a miller and only built the mill in order to sell it on. He advertised the mill twice but no one was interested. In 1834 Hare died unexpectedly at the age of 29 leaving his wife Anne with two small children and a windmill in her care. 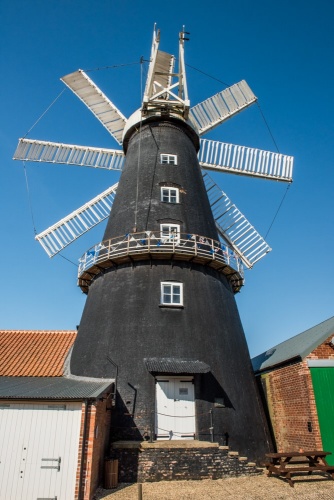 In 1836 Anne Hare married a widower named Sleightholme Nash, member of another milling family. It seems unlikely that it was a love match - he was 69 and she was a widow of 28 with two children. Nash's relatives objected strenuously to the marriage for it appears that Anne had previously promised to marry one of Nash's sons.

The son had to publicly declare that he renounced his existing claim to marry her before the ceremony could take place. Even then, Nash's female relatives objected so strongly that policemen had to guard the couple on their way to and from the church.

They did have two children together before Nash died in 1847, leaving Anne a widow for the second time.

Here is where inheritance laws come into the stale; under the laws of the day, when Nash and Anne Hare married, all her belongings became his. So the mill was now Nash's legal property, to dispose of as he saw fit. Rather than pass it on to one of his children with Anne, he left the mill to the three sons of his first marriage. 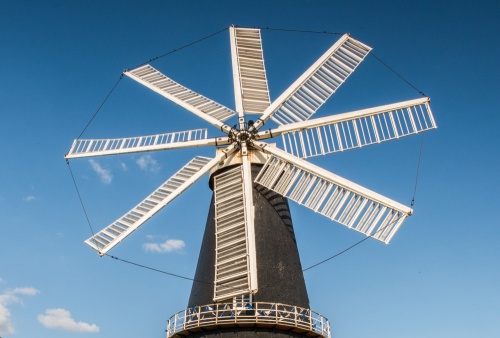 In 1890 a high wind caused the sails to run backwards. They were blown off, taking the cap with them. John Pocklington found an eight-sailed mill at Skirbeck, near Boston, and used material from that mill to rebuild Heckington Mill, in the process transforming it from its original five-sailed design to its present eight-sailed form. You can see that the mill cap overhangs the tower, a sign that the cap, sails and tower were built separately.

The Skirbeck mill had been built in 1813 and operated until 1891 when it was put up for auction. John Pocklington was able to purchase the mill for just £72.10.0d but only on the condition that he completely clear the site. This he did, using the sails and cap to repair Heckington Mill. He did not stop there; he used bricks from the Skirbeck mill to build the mill house that stands beside the rebuilt mill.

Pocklington was an entrepreneur; he combined milling and baking with the grain he produced. He also used the wind power from the mill to drive a sawmill he erected on the same site. He also farmed and was active as a builder.

Pocklington repaired the mill in 1933 and fitted four new sails. When he died in 1941 he left the mill to his family. 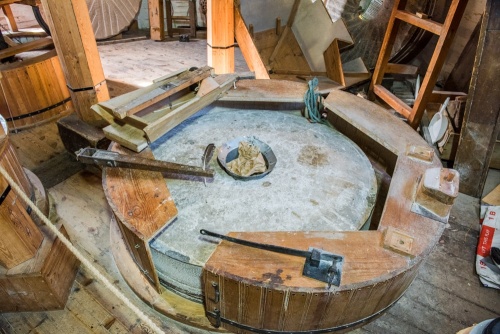 One of the grindstones

The mill operated until 1946. After seven years of decay, it was purchased by the Kesteven County Council for £400. The Council did not restore the mill but simply made it safe. It was another 33 years before the Lincolnshire County Council completed restoration, constructing 192 new shades and returning the mill to working order.

The mill is made of red-brick painted black with bitumen (tar). It stands five storeys high with a traditional Lincolnshire ogee-shaped cap. There are windows on each floor aligned with the cardinal sides of the tower. There is an external 'reefing stage' at the second-floor level.

The ground floor has a shop and a fascinating museum. You climb stairs to the first floor, or meal floor, where grain is blended to create animal feed. The second floor is the stone floor, where three sets of grinding stones sit. Above is the lower bin floor where grain is cleaned and above that is the upper bin floor for storing grain. Atop this is the dust floor where the pulley that operates the sack hoist is kept. 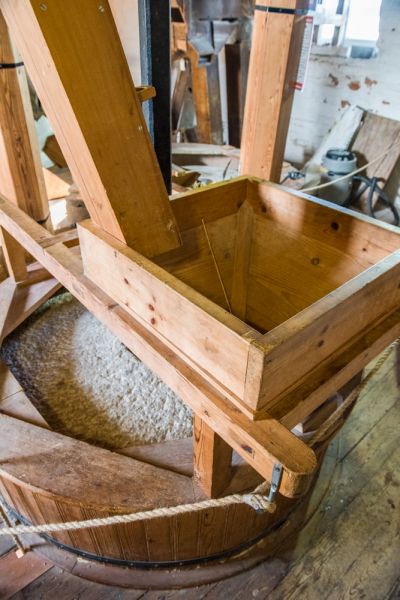 Each of the eight sails is 34 feet long (10.4m) and has 24 shutters. Each shutter is bolted to the arms of an iron cross mounted on a windshaft. Halfway along the windshaft is the main drive wheel, which is 8ft (2.4m) in diameter. At the top of the shaft is a brake wheel with 80 teeth. 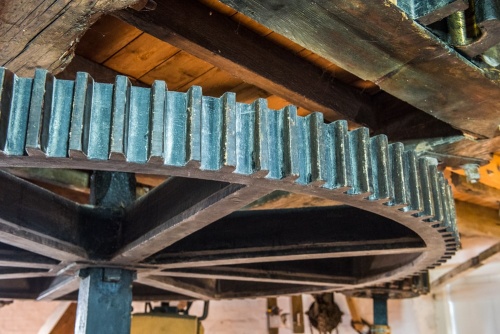 The sail shutters are operated by means of a system of levers and rods tied to a long loop of chain that descends through the floors to the gallery. Weights on the chain counteract the force of the wind and regulate the speed of rotation. The direction of the eight sails is regulated by an eight-bladed fantail so that the sails always face into the wind.

There are extremely good information panels on every floor of the mill, explaining all the machinery and its part in the milling process. You can go outside onto the external platform for excellent views over the rooftops of Heckington.

The visitor centre and museum area is top class and really does a good job of explaining the history of the mill, the story of its restoration, and how the mill functions. We enjoyed our visit thoroughly and can highly recommend Heckington Mill. 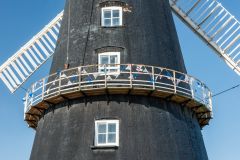 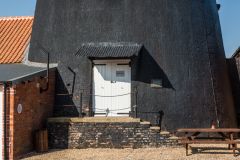 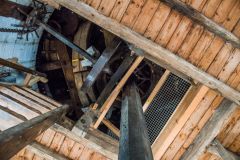 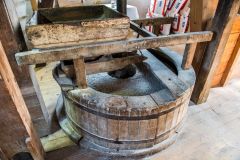 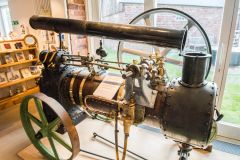 Self Catering near Heckington