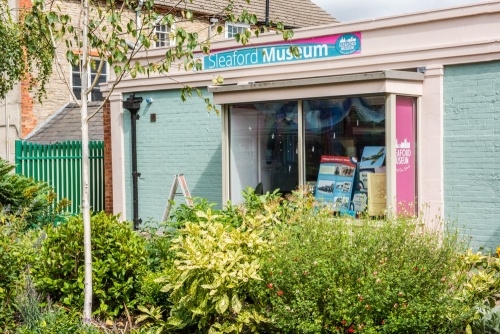 This small, modern museum covers the rich history of Sleaford and its area, from the Roman period to the present day. The Museum's mission is encapsulated in its slogan, 'Sharing our Stories'. Those stories include a wealth of information about the people, the companies, and the social history that made Sleaford what it is today.

The museum began over 40 years ago, occupying temporary space in a rented building. It was not until 1994 that the Sleaford Museum Trust was formed to manage the varied collections amassed by local contributors. In 2004 the Trust created a 'virtual museum' online, but the real-life museum objects did not find a permanent home until 2015 when a building in Monument Gardens was regenerated by the town council and converted to become the town museum. 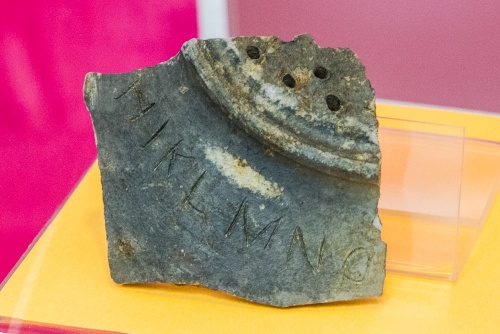 The museum is small, but there is a lot crammed into it! And since space is limited the museum regularly changes the objects on display to highlight a wide variety of themes covering all aspects of life in Sleaford over the centuries.

We noticed several Roman items including sherds of Celtic and Roman pottery. Unusually, visitors were invited to pick up the sherds and handle them - a rare treat as some of the pottery sherds were over 2,000 years old. Other Roman artefacts included three brooches, one depicting a wild boar and another in the shape of a hare. There were two coins, one from the 2nd century AD, and a slender medical implement.

Contrast the Roman artefacts with a vivid blue smoking cap dated to 1900, embroidered with gold braid and a tassel. These smoking caps were worn by gentlemen for relaxing at home with a pipe. They were often paired with a matching jacket and helped keep tobacco smoke from the wearer's hair. Around the same time period was an Edwardian pram found in the loft at the Waggon and Horses Inn on Eastgate. 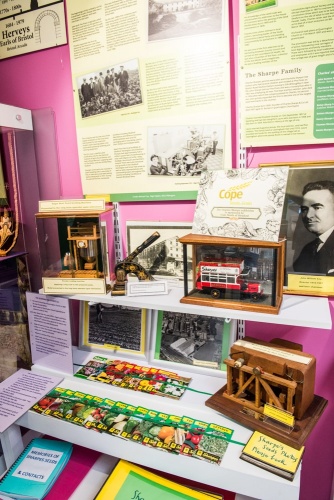 The town of Sleaford is closely linked to the prosperity of local seed merchants like the Charles Sharpe Company. A special display looks at the Sharpe Company and includes a scale model delivery van, a company seal, old photographs, a large number of historical seed packets, and a wealth of information on the Sharpe family and their factories. Part of the display was a sugar beet seed grading machine given to its longtime operator on his retirement from the company.

Local companies that have played an important part in Sleaford's history are remembered in special exhibits. One past exhibit looked at the Lee & Green company, which had an aerated water bottling factory on an island in the River Slea. The company also branched out into making their own brand of ginger beer. Another exhibit looked at Rauceby Hospital from 1894-1987.

Aviation history has affected every part of Lincolnshire. A 2018 exhibit looked at 100 Years of the RAF and focussed on the ties between Sleaford and the nearby RAF College Cranwell. 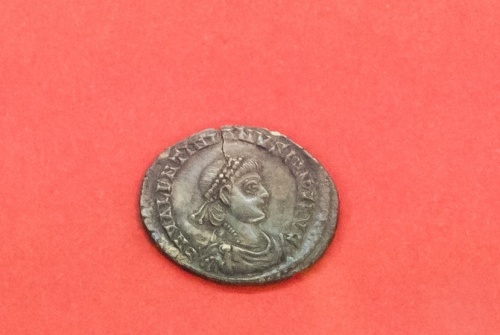 One unusual find is a George III silver 'emergency bank shilling'. In 1797 Prime Minister William Pitt the Younger suspended the gold standard following a failed French invasion of Wales. As a result, people began hoarding gold and silver coins. Private companies issued tokens to fill the shortfall in coins. Though not backed by the Bank of England, these tokens were often used to complete local transactions. 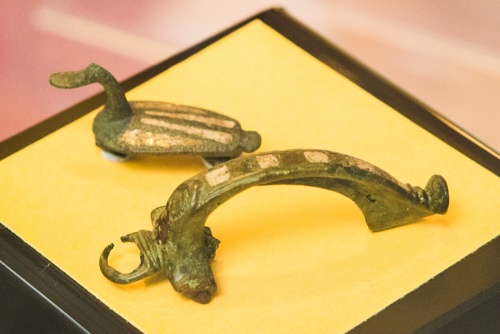 Sleaford Museum is easy to find. It stands at the eastern end of Southgate, just before you reach Station Road and the railway crossing. It is set back from the road in an area known as Monument Gardens, opposite the Handley Memorial. There is no dedicated parking area, nor did we see any road signs to the museum but we found it relatively easy to park nearby.

About Sleaford Museum
Address: 81 Southgate, Sleaford, Lincolnshire, England, NG34 7RQ
Attraction Type: Museum
Location: At the eastern end of Southgate, by the railway crossing and across from the Handley Memorial. No parking on site but there is parking at the railway station.
Website: Sleaford Museum
Location map
OS: TF069455
Photo Credit: David Ross and Britain Express

More self catering near Sleaford Museum