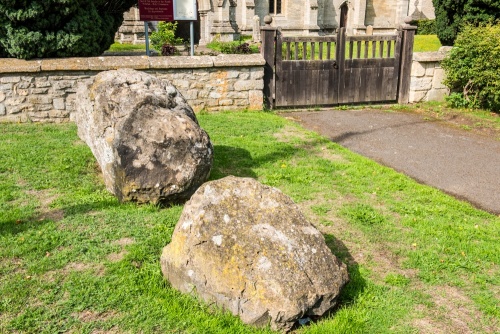 Anwick is a small village in the North Kesteven District of Lincolnshire, about 4 miles north-east of Sleaford. The parish church of Anwick is a late 13th-century building dedicated to St Edith.

Immediately outside St Edith's churchyard wall are two large boulders known as the Drake Stones. The boulders are made of Spilsby sandstone and are what is geologically known as glacial erratics. It isn't clear whether this was their original position or if they were moved to this spot.

Several local stories cling to the rocks. One tale says that a local farmer was ploughing a field when his horse and plough were sucked into the ground in an area of quicksand. Despite his frantic efforts to save the horse it was sucked under the ground and lost. As the horse disappeared, a drake (some versions say a dragon) emerged from the hole and flew away. When the villagers returned to the spot they found a stone in the shape of a drakes head. 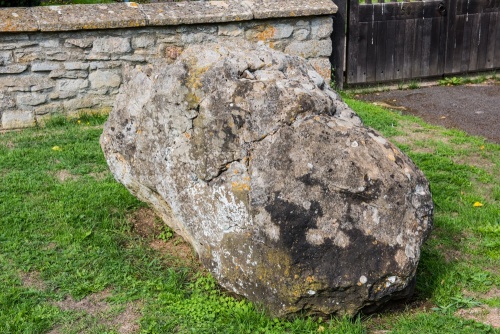 They thought the stone might hide treasure but they could not move it. It stayed in the ground despite numerous attempts to dig for treasure beneath it. It was not until the 19th century that it was moved with the aid of a traction engine. During transport to the churchyard, the stone broke into two pieces as we see it today.

Another, more mundane story, says that they are called Drake Stones because ducks used them for shelter. 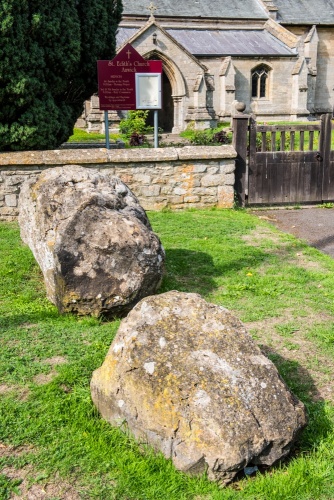 Another view of both stones

It is hard to say whether the rocks ever were one stone; at first glance, they don't appear to have any matching edges. The stone nearest the churchyard is much larger, almost 1m high. The smaller stone is roughly half that size.

The Victorians believed that the Drake Stones were 'of Druidic origin', but there is nothing to suggest that they were ever part of any religious observance. It does seem curious that they stand in front of the churchyard, though. Might the church stand on or near a site of ancient significance?

It is extremely easy to find the Drake Stones. They stand beside the churchyard path on Church Lane, just north of the A153. There is no parking area that we could see but it was very easy to park along the verge on Church Lane.