Ranworth's medieval church is an icon of the Norfolk Broads, its 14th-century tower standing high above the River Bure, looking out over Malthouse Broad. The church, often known as 'The Cathedral of the Broads', is home to three outstandingly important 15th-century historical treasures; a magnificent painted rood screen, the illuminated book known as The Ranworth Antiphoner, and a superbly carved cantor's desk.

St Helen's was built around 1450 on the site of an earlier medieval church. The village of Ranworth today seems little more than a hamlet, scarcely able to support a church half this size, but the medieval wool trade brought wealth to the local merchants, and they lavished their riches on the church, creating one of the finest country churches in Norfolk and an outstanding example of Perpendicular architecture.

Even people who aren't particularly interested in history or architecture come to Ranworth to climb the tower and enjoy the panoramic views over the surrounding broads. To reach the top of the tower requires you to climb 89 steps, ascend a pair of ladders, and navigate a trap door, but the reward for your efforts is perhaps the best view in the Norfolk Broads National Park, encompassing the valley of the Bure and five broads. 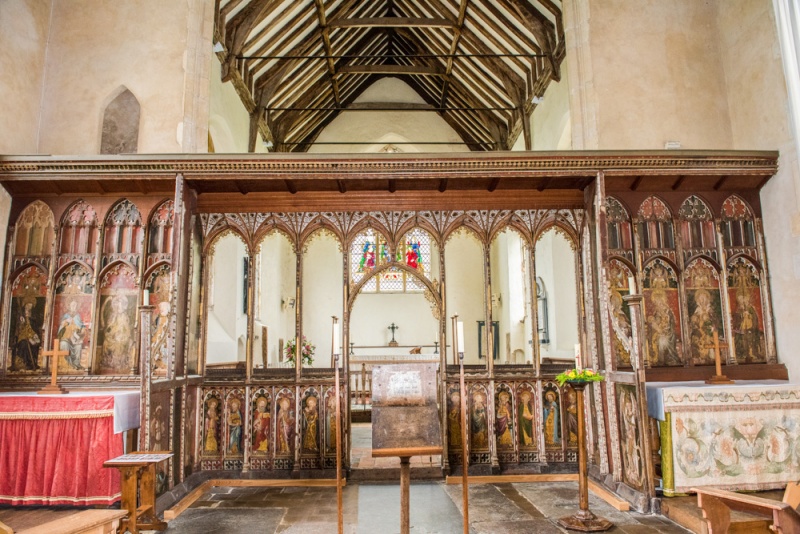 This marvellous piece of late medieval craftsmanship is perhaps the finest painted screen in England. The screen is divided into three sections. In the centre are three painted panels on either side of a gate leading into the chancel. The middle of this section is open, allowing views from the nave towards the high altar, and the top is a beautifully carved canopy under a moulded rail. The base of this central section is divided into panels with paintings of the twelve Apostles.

Flanking the central section are two wings, with solid panels rising to canopy height, and on either side of the wings are retables acting to separate the aisles from the Lady Chapel and St John the Baptist Chapel.

All the screen panels save one are painted with figures of saints, including at least two British ones (St Thomas Becket and St Etheldreda). The one exception is a panel depicting the Virgin Mary. Both St George and St Michael are shown slaying a dragon. 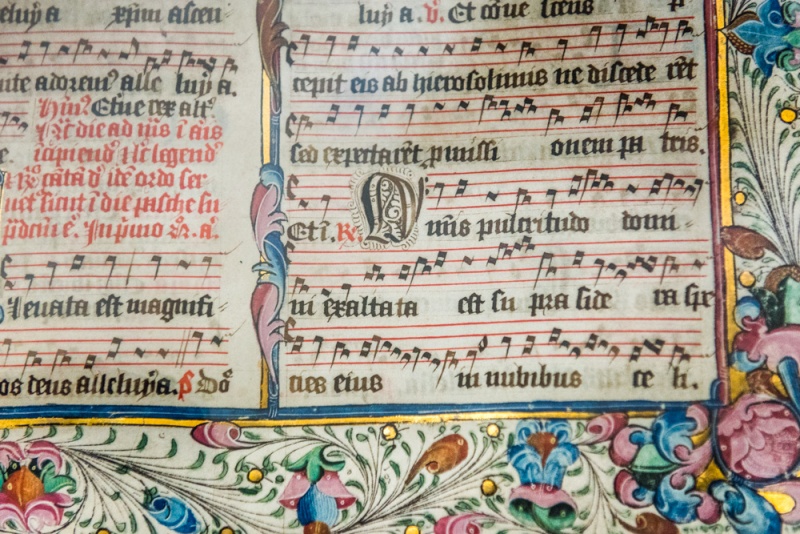 The Ranworth Antiphoner is an illuminated liturgical book, with the choral score for daily church services in medieval Latin. The Antiphoner contains both text and music for psalms that were alternatively sung and spoken between the priest and choir.

It was probably intended more for display than for use during services. It was bequeathed to the church by William Cobbe in 1478, which presumably means it was made well before that date. It was lost - or perhaps hidden - during the religious turmoil of the 16th century, before it was rediscovered and purchased for the parish in 1912.

The gilded and vividly coloured illuminations are in wonderful condition over 500 years after they were made. The book is made up of 285 vellum sheets and was probably made in Norwich. The Antiphoner is held in a humidity-controlled metal box with a bulletproof glass top so that visitors can view the illuminations. The view from the top of Ranworth church tower

Now used as a lectern, the desk is an upright stand supported on a slender stem. It is decorated on one side with a 15th-century versicle from the Gloria; a short verse made to be spoken or sung by the priest, to which the congregation gives a reply. On the other side, the desk bears the symbol of St John the Evangelist.

Compared to the glorious Antiphoner and rood screen the font is almost an afterthought. It is surprisingly plain, with an octagonal bowl atop a very wide stem with a moulded base, set upon a very large octagonal base.

Other historical highlights include some very good poppyhead bench ends, including one in the shape of a grotesque face. There are some very good medieval misericords under the choir seats, and a 14th-century angle piscina in the south wall of the chancel.

The church is usually open daily to visitors. I've visited several times and always found it open, though I did once have to hurry to take some photographs when someone arrived to lock the doors at 5:30!