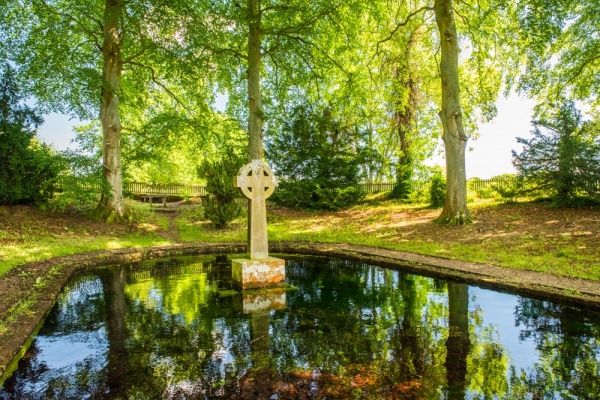 Holystone is a small village by the River Coquet deep in the Northumberland countryside. The Romans built a road past this remote location, leading from Bremenium (modern Rochester) in Redesdale to the River Aln and then on to the Northumberland coast. Beside the Roman road was an ancient spring, a precious source of water for the Romans that very likely served as a shrine for the Romans and other travellers along the road. The Roman road enters the well enclosure in its north-western corner and runs immediately north of the water basin.

It was probably the Romans who transformed the natural spring and built a low stone retaining wall around the spring's outflow to create a large, rectangular pool of clear water. The basin enclosed by the stones measures 13m x 7.8m (about 42 x 25 feet). The basin is oriented on a south-west to north-east axis, the same orientation as the Roman road. The spring that feeds the well is said to produce 560 gallons of water every minute. The water is filtered through a bed of fine sand to produce sparkling clear water. 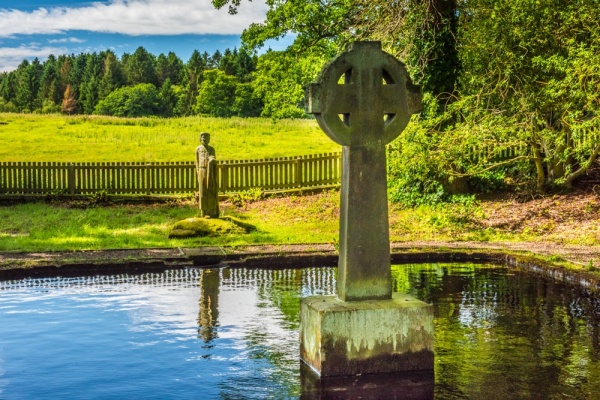 The cross and St Paulinus statue

A Tale of Two Saints

The 5th-century Celtic missionary St Ninian is said to have preached here and baptised his converts to Christianity in the waters of the well pool. St Ninian was the Bishop of Whithorn in modern Dumfries and Galloway, and may well have visited Northumbria in an attempt to spread Christianity. We know that he is linked to numerous wells beside Roman roads throughout Northumberland. Following his missionary work, the well was known as St Ninian's Well.

St Paulinus, who had such a profound impact in this part of Northumberland, is said to have baptised over 3000 Northumbrians in Lady's Well during Easter week in AD 627. Not surprisingly, the well's name was later changed to St Paulinus's Well. Paulinus is said to have knelt on a flat stone now known as the Holy Stone, located at the east end of the pool. It is this Holy Stone that gives the village its name. An alternative explanation says that the Holy Stone is, in fact, the stone base that supports the statue of St Paulinus. 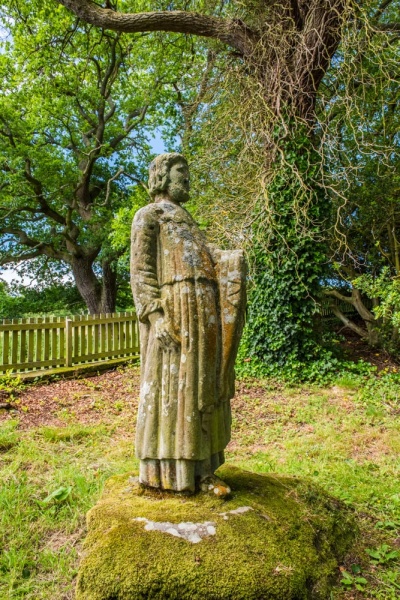 The medieval statue of St Paulinus

Paulinus of York was a 7th-century Roman monk sent by Pope Gregory I to the Kingdom of Kent in south-east England. His mission was to convert the Anglo-Saxon to Christianity. He served in Kent until AD 625, when he accompanied AEthelburg, the sister of King Eadbald of Kent, to Northumbria for her marriage to King Edwin.

Once in Northumbria, Paulinus managed to convert the king and his leading nobles to Christianity and began to spread his mission throughout Northumbrian territory. He was named the first Archbishop of York and died in AD 644.

Did St Ninian and St Paulinus actually use the well to baptise heathens into Christianity? It is certainly possible, but it is also likely that the stories grew up around a site that had been considered sacred for centuries before the arrival of the Christian missionaries in Northumbria.

If St Paulinus actually baptised 3000 people it probably occurred elsewhere, very probably in York. But that did not stop the stories being assigned to this ancient sacred site. It seems likely that the connection of Holystone to St Paulinus was a result of a misreading by scholars of the Venerable Bede's writings. 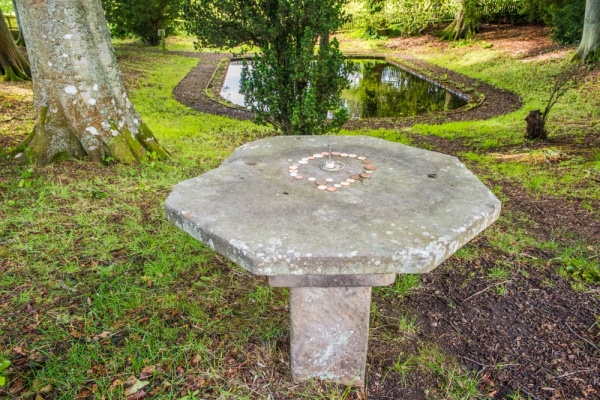 Sometime between 1107 and 1124 an Augustinian priory of canonesses dedicated to the Virgin Mary was founded at Holystone, at the opposite end of the village from the holy well. The nunnery was probably founded by Odinel de Umfraville I, lord of Redesdale. The nuns gained ownership of the holy well, and the nunnery's dedication to the Virgin Mary gave the holy well its most common name 'Lady's Well'.

The nunnery appears to have been refounded, or at least given larger endowments of land by Richard de Umfraville in the early 14th century after it was reduced to poverty by the continual conflict in the Scottish border region.

The priory was always a fairly poor monastic house, supporting only 6-8 canonesses, and was suppressed by Henry VIII during the Reformation. The monastic buildings were pulled down in 1541 to provide stone for building Harbottle Castle, but were uncovered by a volunteer team of local people digging near the site of the parish church in 2015. The remains were then covered over once again after being recorded.

The veneration of holy wells was discouraged during the Reformation, but that did not stop the Lady's Well from continuing as a destination for pilgrims. The tradition of pilgrimage continues up to the present day and there are two Eucharist services held here every year.

In 1780 a 15th-century statue of St Paulinus was brought to Holystone from Alnwick Castle and erected in the centre of the pool. Then in the Victorian period, the statue was moved to dry ground at the west end of the pool and a stone cross in Celtic style was raised in the pool to replace it. The cross is inscribed with the words 'IN THIS PLACE PAVLINUS THE BISHOP BAPTIZED THREE THOUSAND NORTHVMBRIANS – EASTER DCXXVII'.

As for the medieval statue, it is set into a stone base that resembles the base of a medieval cross. It is this base that has been claimed to be the Holy Stone that gives the village its name.

At the east end, on a rise of ground looking down on the pool and the cross, is the Holy Stone, raised on supports to form an altar. An alternative story says that the Holy Stone was added to the site during the 1780 restoration work.

Aside from its spiritual significance, the Lady's Well has a very practical purpose; the well is used to supply water to Holystone village, so it is very important not to disturb the water in any way while visiting. 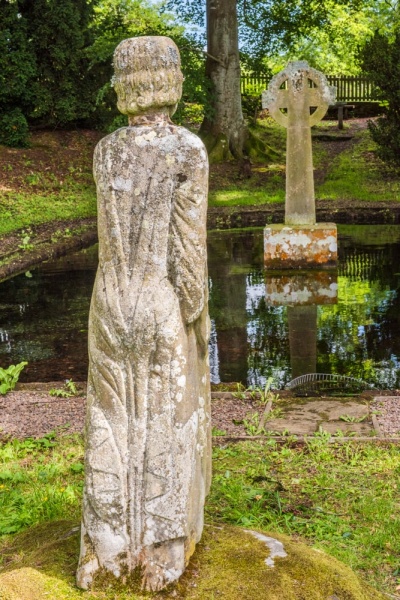 St Paulinus looks towards the cross

The village is located off the B6341. Look for signs in the centre of the village. There is no vehicular access to the holy well itself. You'll have to park by the side of the road and follow the obvious footpath signs. The path leads along a field boundary and you come to a grove of trees surrounding the holy well after about five minutes of very level walking.

The site is open to visitors at any time. Though it is officially a National Trust property it does not appear on the Trust website (at least, there was no information the last time I looked) but it is very easy to find.

The Lady's Well is one of those special places that you want to approach with a reverential hush. It is so still, with only the sound of birds singing penetrating the grove of trees that protect the well.

We visited on a sunny afternoon in spring, and for most of our visit, we were the only ones there. After 30 minutes of soaking up the atmosphere and taking scores of photos a small group of people arrived. They seemed to be taking part in a pilgrimage, so we left them to it in peace and went on our way, but the peaceful atmosphere seemed to come with us. It's that sort of place.

Lady's Well has been the focus of much speculation, though very little is actually known about its origins. Is it an ancient pagan site? A Roman site? A Celtic site? Or perhaps a combination of all three?

There is a second ancient well in Holystone; on the south side of the village is St Mungo's well, named after the 6th-century Scottish saint and founder of Glasgow. 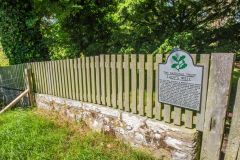 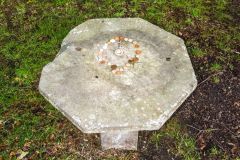 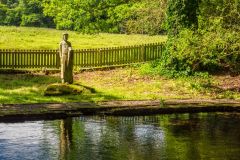 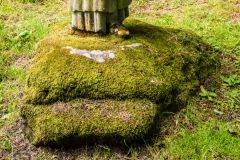 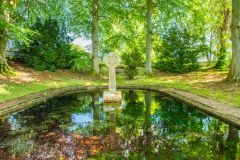