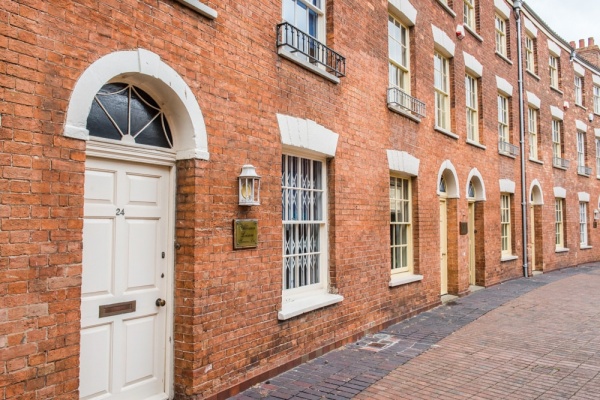 The historic market town of Bridgwater is located in the valley of the River Parrett, at one end of the Somerset Levels and between the higher ground of the Mendips to the north-east and the Quantocks to the south-west.

The town has a history going back to the Saxon era, when it was little more than a huddle of timber huts on the relatively high ground on the river's west bank.

It is worth noting that despite the name, there was no bridge. The name comes from the Anglo-Saxon word 'Bryj', which simply means a quayside. The 'water' part of the name comes from 'Walter', the Norman lord of the manor. So Bridgwater, or Bryj of Walter, essentially mean's Walter's Quay. It has nothing to do with either bridges or water!

But we're getting ahead of ourselves. At the time of the Norman Conquest Bridgwater was owned by the Saxon lord Merleswain, the Sheriff of Lincolnshire and a supporter of King Harold. After the Conquest, William the Conqueror granted Bridgwater to Walter of Douai.

In 1200 the fortunes of Bridgwater changed forever due to the influence of William Brewer, a close advisor of King John and the man responsible for delivering the ransom money that secured Richard the Lionheart's release from captivity. Brewer knew that if a bridge was built across the River Parrett, sea-going ships sailing up the river from the Bristol Channel would have to stop and unload their goods. 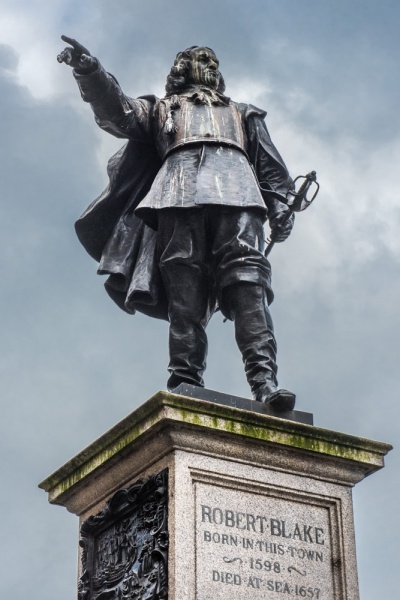 He convinced King John to grant Bridgwater a charter, giving it the status of a royal borough, the right to collect burgage rent, and the abolition of serfdom within the town. Bridgwater was transformed from a rural backwater to a commercial transportation hub overnight, and Brewer became a very, very rich man. Brewer built the first bridge, a timber structure, and to guard the bridge and the newly independent town he constructed a magnificent castle.

Bridgwater Castle was huge, defended by 12 feet thick walls and protected by the river on one side and a wide moat on the other three. The castle enclosure, or upper bailey, stood roughly where King Square is now, and the lower bailey extended from King Square to the river.

Bridgwater Castle was destroyed by Parliament in the Civil War. The castle's vaulted undercrofts still survive in the cellars of buildings in the Castle Street area. Very little survives above ground except for an archway at Watergate Restaurant on West Quay and a section of wall behind the Boots shop.

The medieval town had four ceremonial gates, but the town itself was not defended by walls. Instead of walls, Bridgwater had a series of ditches. The East Gate was located near the present Cobblestones Inn. In 1539 the Abbot of Glastonbury defied Henry VIII's attempt to suppress the Abbey. He was hanged, drawn, and quartered, and one-quarter of his body was put up on the gateway for all to see.

Bridgwater was granted a charter to hold an annual fair in 1249. Labourers from the surrounding area gathered at Bridgwater hoping to find employment for the year ahead, and thousands of sheep and horses changed hands. The fair, dedicated to St Matthew, is still held today, though now it is more of a funfair, with fairground rides. 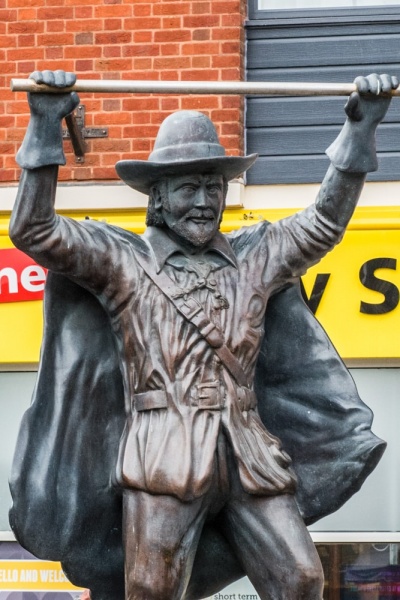 Don't confuse St Matthew's Fair with the famous Bridgwater Carnival. The Carnival began as a 5 November Bonfire Night celebration, with a huge bonfire on Cornhill. Effigies of the Gunpowder Plot conspirators, known as 'guys' after Guy Fawkes, were burned in the fire. Local groups would create their own guys and carry them in procession to the bonfire. In time the procession itself became a focal point for the celebration, with participants called Masqueraders creating elaborate costumes.

After the procession ends the 'squibbing' starts. A squib is a firework held aloft at the end of a wooden handle called a cosh. One hundred squibbers form a line in the town centre, holding their burning fireworks overhead, while lines of flammable liquid run along the ground.

Another feature of the Carnival is a procession of carts, or floats, highly decorated to depict a particular theme chosen by the Carnival committee. Themes vary from year to year and include things like characters from popular children's books, scenes from history, and world cultures.

A Spirit of Carnival statue was erected on Cornhill to mark the 400th anniversary of the Carnival in 2005. 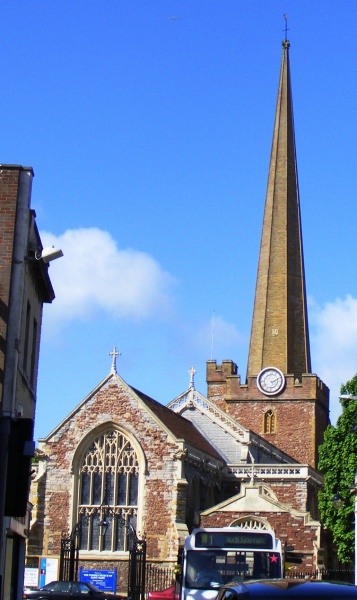 Bridgwater's impressive parish church is the oldest building in the town, dating to at least the 13th century. William Brewer gave money to rebuild the church in the early years of that century, so presumably, it was in existence long before that time. The first written record of a vicar comes from 1280. The striking spire was installed in 1367.

It soon became apparent that the spire was going to be too heavy for the tower and heavy buttresses had to be built. It was from the tower that the Duke of Monmouth watched the king's army make camp at Westonzoyland before the decisive Battle of Sedgemoor in 1685.

The historical highlight of St Mary's is a huge painting of The Descent from the Cross, used as an altarpiece. The painting, by an unknown Spanish or Italian artist, was taken from a captured Spanish warship. Another highlight is an octagonal oak pulpit dating to the 16th century. 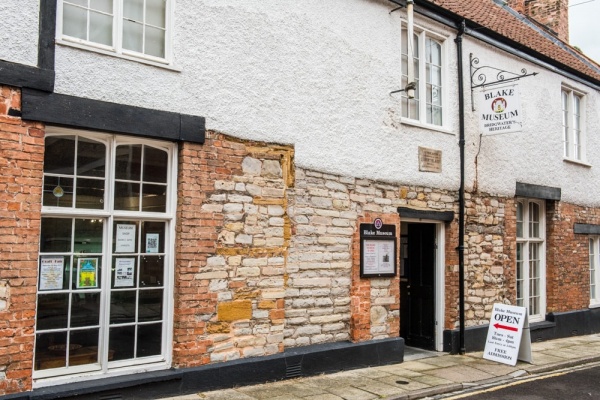 Bridgwater's most famous native son was Robert Blake (1598-1657), a naval commander who, perhaps more than any other person, made the English navy the dominant force it was from the 17th into the 20th century. Blake was known as the 'Father of the British Navy'. His importance in naval history cannot be overstated, and he deserves to mentioned in the same breath as Drake or Nelson as a naval hero, but his name is largely unknown today.

There's a very good reason for Blake's obscurity; he fought for Parliament in the Civil War, but after the Restoration of the Monarchy in 1660 the exploits of Parliamentary leaders were expunged from the history books by Royalist supporters.

Blake led the Parliamentary resistance at the Siege of Taunton in 1645 where he famously declared that he would eat three of his four pairs of boots before he would surrender. In 1649 he was made General at Sea. In that role, he helped build the largest navy in English history, and wrote the navy's first set of rules and regulations, called, 'The Laws of War and Ordinances at Sea'. He also created the first naval courts-martial. He also developed techniques for blockades and landings. Though Blake was never given the title of 'Admiral' he is popularly known as Admiral Blake.

The house where Admiral Blake was born is now the Blake Museum, housing displays not just on Blake's life but on Bridgwater's heritage, with archaeological finds, old photographs, exhibits on the Battle of Sedgemoor, and the Bridgwater Carnival.

A bronze statue of Blake stands on Fore Street.

A few miles east of Bridgwater, in the low-lying landscape of the Somerset Levels, is the Westonzoyland Pumping Station, a group of historical buildings housing a restored steam-driven pump used to drain the marshy Levels. To the north-west is Cannington, where a walled garden flourishes on the site of a medieval monastery.

About Bridgwater
Address: Bridgwater, Somerset, England
Attraction Type: Town
Location: At the junction of the A38 and A39, J23 or J24 off the M5
Location map
OS: ST298370
Photo Credit: David Ross and Britain Express

More self catering near Bridgwater

More bed and breakfasts near Bridgwater

Self Catering near Bridgwater