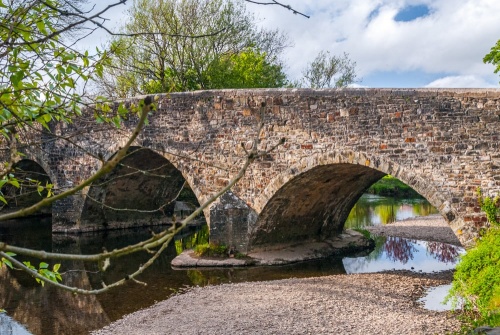 The 18th century Exe Bridge across the River Exe

Exebridge is a small village straddling the county boundary between Somerset and Devon, near the confluence of the Rivers Exe and Barle. The village takes its name from an 18th-century stone-built bridge over the River Exe.

The eastern half of the village lies in Morebath parish (Devon) while the western half is in the parish of Brushford (Somerset).

This Grade-II listed bridge spans the River Exe, which here acts as the county boundary. There was a medieval bridge on the site, but the present bridge dates to the early Georgian period. When the medieval bridge fell into decay in 1694 it was the responsibility of the residents on the Somerset bank to repair it.

The 18th-century structure was altered in 1853 and restored in 1929. The parapets were rebuilt in the latter half of the 20th century.

The bridge is constructed of local rubble and has three semi-circular arches with a low cutwater on the downstream side. 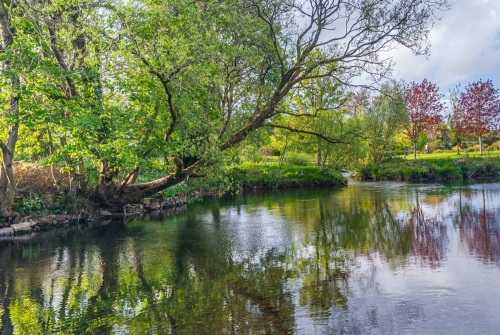 The River Exe at Exebridge

There is a free parking area immediately beside the bridge on the east bank, near the historic Anchor Inn. This attractive, traditional country inn is connected to an intriguing local legend.

In the 17th century, a blacksmith from North Molton named Tom Faggus lost his money in a lawsuit and took to the byways of Exmoor as an outlaw. So popular did he become amongst the poor population that he was known as 'The Robin Hood of Exmoor'.

Faggus had a strawberry mare named Winnie. To evade his pursuers, Faggus had special reversed horseshoes made for Winnie, so that her hoofprints appeared to be going the opposite direction.

Faggus was eventually captured in 1671 at the Anchor Inn at Exebridge when he stopped to give alms to a 'beggar' who proved to be an excise officer in disguise. The officers shot Winnie and took Faggus prisoner. He was tried, convicted, and sentenced to be hanged.

The Exe Bridge is on the B3222 southeast of Brushford and just off the A396. Look for the parking area on the east bank of the river. From there, it is very easy to access the bridge (and to stop for a refreshing drink at the Anchor Inn).

About Exebridge
Address: B3222, Exebridge, Exmoor, Somerset, England, TA22 9AU
Attraction Type: Village
Location: On the B3222 southeast of Brushford. There is parking on the east bank of the river.
Location map
OS: SS928249
Photo Credit: David Ross and Britain Express

More self catering near Exebridge

More bed and breakfasts near Exebridge