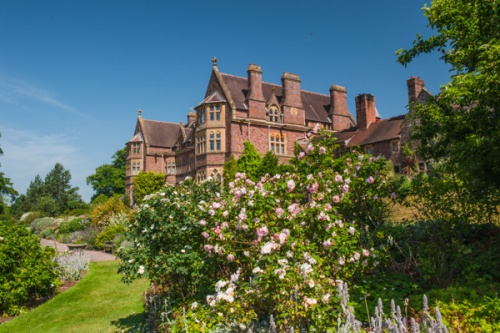 In a roundabout way, Knightshayes owes its existence to a riot. In 1816 labourers at the world's largest lace manufacturing plant in Loughborough rioted and broke factory machines. The Heathcoat family, owners of the factory, decided to move the business to Devon and settled in Tiverton. Some workers still loyal to the Heathcoat family - and keen to keep their jobs - walked all the way from Loughborough to Devon.

Knightshayes is one of the rare surviving examples of work by Burges, who was also responsible for Cardiff Castle and Castell Coch. Burges was a peculiar character who first trained as an engineer before turning to architecture. He was heavily influenced by French Gothic style, and his work is very much in the mode of Gothic Revival. 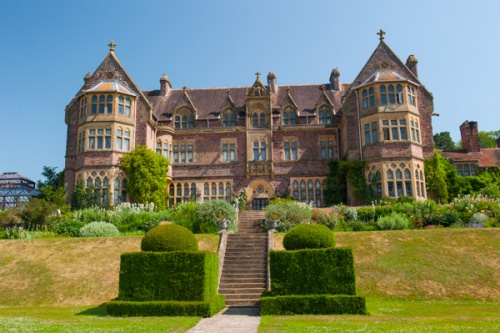 The house from the formal gardens

He must have been a handful to work with, for he considered money to be an annoying side issue in architecture, one that inconsiderately interfered with creating top quality work. He also thought of the houses he designed as his own, wore medieval clothing, and was addicted to opium. Not, one would think, the first choice of a sober businessman and politician to design his family home.

Construction did not progress smoothly. Or quickly. Delay followed delay, and the owner lost patience when Burges had still not completed the house by 1874, and JD Crace was hired to finish the job. Crace was essentially a decorator rather than an architect; his company had worked on Brighton Pavillion and Longleat House but at Knightshayes he took over the job of 'finishing what Burges had begun.

It is Crace who was responsible for much of the painted ceiling and stencilling which make the interiors so memorable. Of the major rooms at Knightshayes only the Great Hall was finished to Burges' original vision.

Where the exterior is reserved Gothic, the interiors at Knightshayes are richly comfortable, a perfect example of what a Victorian country house "ought to be". There are extensive collections of the family china and silver, as well as fine art and family portraits.

Many of the rooms have richly carved panelling, and the corbels supporting the ceiling supports are carved to represent comical figures.

One room is set aside with old photographs and memorabilia relating to Joyce Wethered, one of the most successful golfers between the wars, who married Sir John's grandson.

If you are used to a stately home in the 18th-century neo-classical style then Knightshayes will come as a severe shock to your system. But if you want to see Victorian High Gothic at its richest, most opulent, and most memorable, Knightshayes is a delight for the senses, a treasure to be savoured slowly and repeatedly.

Knightshayes Garden is one of the most enjoyable in Devon. A landscape of woodland and carefully arranged plantings of flowering shrubs create a place of ever-changing vistas. There are a variety of amusing animal topiary and clipped hedges, spring bulbs, rare shrubs, a lily pool and excellent seasonal colours throughout. There are enjoyable walks through the mature woodlands surrounding the house. 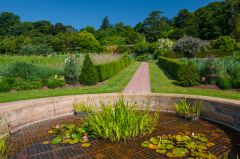 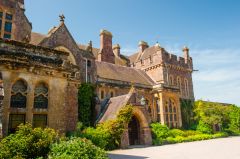 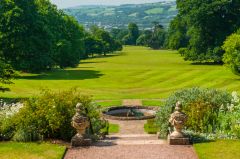 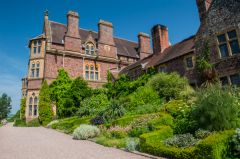 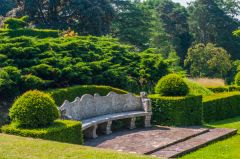 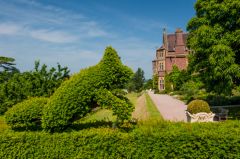 More self catering near Knightshayes Court