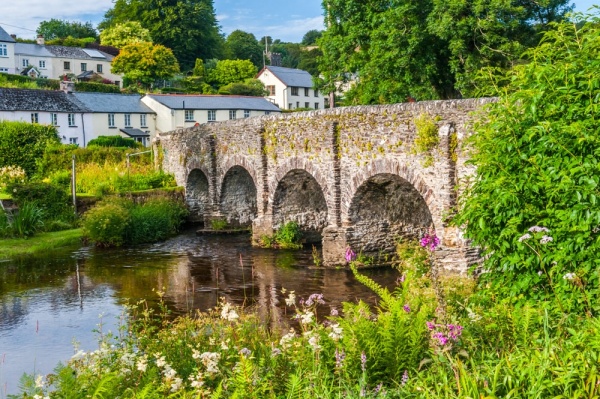 The pretty Exmoor village of Withypool lies on a crossing of the River Barle. Withypool was recorded in the Domesday Book of 1086 as Widepolla.

A picturesque six-arched stone 19th-century bridge crosses the river, with most of the village lying on the north bank. The bridge was built in the mid-Victorian period to replace a medieval packhorse bridge that spanned the river about 100 yards upstream. A picnic spot with a small car park stands beside the bridge.

Along the river bank grow the willow trees that give Withypool its name. The term 'withy' is used to describe the strong, flexible willow stems or rods, often used to weave baskets and other containers. For more on withies see our article on the Willows and Wetlands Centre at Stoke St Gregory).

Aside from the bridge, there are just three listed buildings in the village itself. The oldest of these is the church of St Andrew's, which dates to the late medieval period. The church as we see it today is late medieval, though the presence of a medieval carved cross set into a tower buttress and a 12th-century chalice font hint at an earlier building on this spot.

In the churchyard stands the remains of a medieval churchyard cross, listed for its historic interest by Historic England. Only the socket remains along with 150mm of the shaft.

Near the church stands Garliscombe Mill, the third listed property in the village. The Mill dates to the early 19th century and still boasts the remains of its mill wheel. Inside the building are 2 pairs of mill stones and the wooden gearing used to transfer power from the waterwheel. 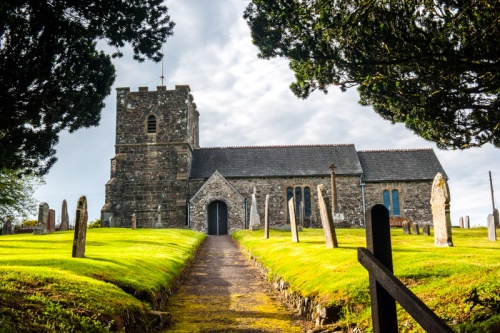 Just west of the mill is the Royal Oak Inn, a lovely 17th-century traditional country inn. The Royal Oak offers bed and breakfast and self-catering accommodation in addition to a well-stocked bar and excellent dining.

Writer RD Blackmore, author of the novel Lorna Doone, wrote part of his famous Exmoor novel in the bar of the Royal Oak. The artist Alfred Munnings had a studio in the inn's loft. Don't confuse the Royal Oak in Withypool with the Royal Oak in neighbouring Winsford!

The village is set in glorious Exmoor countryside, with large expanses of open moorland. Much of the moorland is common land, where anyone can graze their cattle or sheep. West of the village is Landacre Bridge, a restored late medieval bridge. 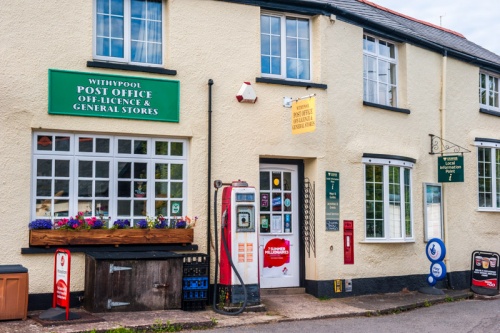 Landacre holds a special place in Exmoor history. In the 13th century, this part of Exmoor was reserved by the Crown as a Royal Forest, where the king and his court could hunt. No buildings were allowed to be constructed within the forest. The Exmoor Forest Court (aka the Swainmote Court) was held at Landacre Bridge or at the Royal Oak in Withypool. The court effectively made Withypool the administrative capital of Exmoor.

Every seven years the Free Suitors (owners or tenants of the 52 smallholdings in Hawkridge and Withypool) had to walk the Forest boundary.

The importance of Withypool waned when the Swainmote Court was moved to Simonsbath in the late 17th century.

Withypool boasts a village shop and post office, and a popular tearoom. Near the tearoom stand a very rare set of early 20th century Shell petrol pumps, evoking the dawn of the Age of Motoring!

To the south of the village rises Withypool Hill where you can see the remains of a Bronze Age stone circle. To the west on Withypool Common is Brightworthy Barrows, a trio of Bronze Age burial mounds. Only one of the burial mounds survives in a complete state. The remaining two mounds were damaged by road construction in 1913. The barrows are easily found because an Ordnance survey triangulation marker stands atop the best-preserved mound. To the east on Winsford Hill are Wambarrow Bronze Age burial mounds.

The Two Moors Way long-distance walking trail runs through Withypool, where it links up with the Exe Valley Way. Another popular walk leads along the river from Withypool village to the ancient clapper bridge of Tarr Steps, a distance of roughly 4.5 miles. 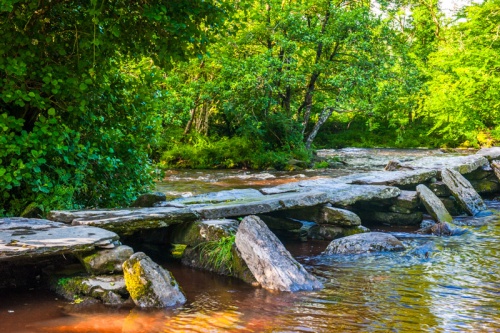 More self catering near Withypool

More bed and breakfasts near Withypool