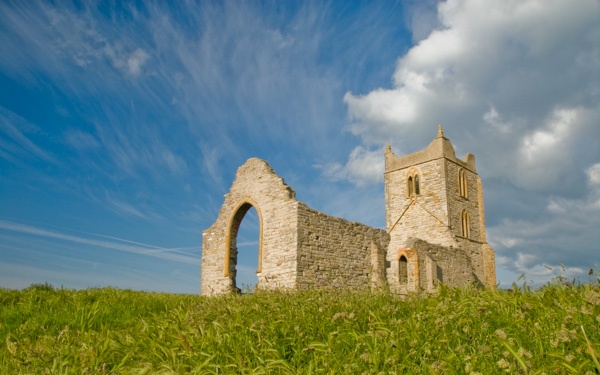 Burrow Mump is one of the most striking features in the otherwise flat landscape of the Somerset Levels. Despite its unusual appearance, the Mump is a natural hill, rising to a height of 24 metres above the levels below. The hill is made all the more striking because it is topped by the romantic ruins of a medieval church dedicated to St Michael.

The land was owned by Athelney Abbey as early as the year AD 937, and Burrow Mump has long been popularly associated with King Alfred, whose base was at nearby Athelney during his wars with the Danes. There was a church atop the Mump as early as the 12th century, but the current church is a product of the 15th century.

The site has seen more than its share of drama; in 1645 a group of Royalist soldiers fleeing after the Battle of Langport (10 July 1645) took refuge in the church. They held out for three days, but not before one of their numbers died from musket wounds and was buried in the church. Forty years later, royal troops occupied the site during the Monmouth Rebellion.

Excavations on the site of the Mump have unearthed Roman pottery. Archaeologists also found remains of a wall at right angles to the church wall, and for many years this was interpreted as being evidence of a Norman castle. This idea seems to have been discredited, and there is no evidence of a castle on the site.

Though the church itself is legitimate, its ruins were made to look more romantic in the 19th century, when the fashion for romantic follies was at its height. In the 20th century, the site of Burrow Mump was donated to the National Trust as a war memorial. There is a National Trust car park at the base of the hill, with ample free parking. It is well worth a climb to the top, for the views across the Somerset Levels can be quite stunning. 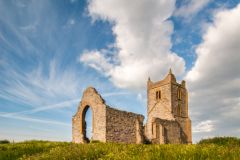 More self catering near Burrow Mump