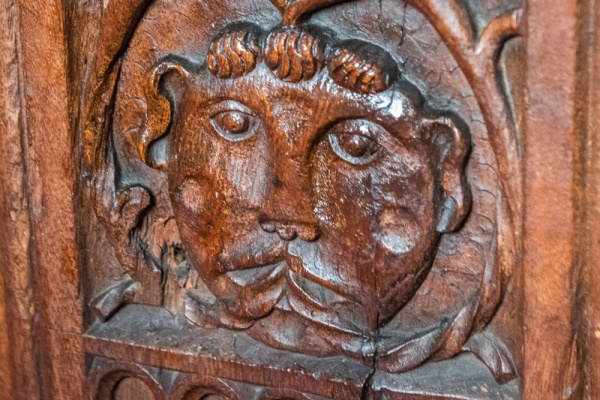 The story of St Bartholomew's Church in East Lyng, Somerset, is inextricably linked to the dramatic tale of King Alfred the Great. King Alfred sought refuge from his Danish foes in the winter of AD 877 by retreating to the remote marshes of the Isle of Athelney, just east of East Lyng.

In the 9th century, the area around East Lyng was a watery wilderness, an area of reed beds and ever-changing water channels through the marshes. At that time Lyng was surrounded on three sides by tidal marshes and wetlands.

Protected by the hostile marshes Alfred rallied his men to him, forged weapons, and planned his next move. In the spring of AD 878, he slipped out of the marshes and inflicted a devastating defeat on the Danes at Edington, forcing Guthrun, leader of the Danes, to sign the Peace of Wedmore. Guthrun and his leading nobles were baptised at Aller, a few miles from Lyng.

In gratitude for his victory, Alfred founded (or perhaps re-established) a monastery at Athelney. The monks of Athelney Abbey, in turn, built a parish church at Lyng to serve the local population. The village of Lyng was fortified, to control access to Athelney. You can see evidence of Saxon earthwork fortifications in the orchard near the churchyard, and the sharp drop in ground level at the western edge of the churchyard is another indication of Saxon earthworks.

St Bartholomew's Church as we see it today is an intriguing blend of old and new - or perhaps old and very old. Most of the present building is 14th century, though some historians have suggested that the 14th-century windows have merely been inserted in much earlier Saxon walls.

The oldest parts of the church are the nave and chancel. The tower stands 60 feet high and is embellished with a series of grotesque gargoyles. There are six bells, the oldest cast in 1612. A seventh bell stands on the belfry floor. It was cast in 1609. The tower clock is ancient and still uses stone weights to regulate its cadence.

Interior highlights include fragments of medieval glass in the north window of the sanctuary. Also in the sanctuary is a sedilia, where priests sat during services. Unusually, it appears that the sedilia carving was never finished. The informative church guidebook suggests that the carving may have been abandoned when the sculptor died from the Black Death in 1349.

In the north-west corner of the chancel you can see traces of medieval plasterwork and the outline of a skull and crossed bones.

The north chancel window shows figures of St Bartholomew and King Alfred, who is wearing the Alfred Jewel. 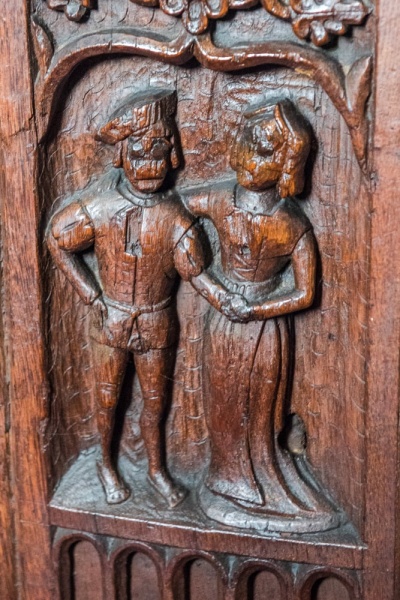 In 1693 an ornately detailed Saxon jewel was found at Newton Park, just a few miles away. The jewel was probably made to adorn the head of a pointer used to follow lines of script while reading. The jewel shows a half-length figure thought to be Christ (or perhaps St Cuthbert) holding wands. The figure is made of enamel covered in rock-crystal and set in an ornate gold case. The case is inscribed with the words 'Aelfred Mee Heht Gewyrean ('Alfred caused me to be made'). The reverse shows a depiction of the Biblical Tree of Life.

The original jewel is in the Ashmolean Museum in Oxford, but in 1947 an exact replica of the Alfred Jewel was given to St Bartholomew's Church.

When we visited St Bartholomew's on a late afternoon in spring we chanced to meet someone coming out of the church as we were going in. She proved to be one of the churchwardens there to give the church a bit of a clean. She volunteered to show us around the church, and in the course of our conversation, she asked if we would like to see the copy of the Alfred Jewel. Of course, we jumped at the chance!

She not only showed it to us, she let us handle it, examine it closely, and photograph it. I've seen the original at the Ashmolean Museum, but that was behind protective plexiglass. Handling an exact copy of the Alfred Jewel was simply mind-blowing. The workmanship is stunning. And to think that we call the 9th century part of the 'Dark Ages'! There's nothing 'dark' about the Jewel; it is an exceptional work of art and it shows how gifted the artists in Alfred's day truly were.

Let me emphasise that the Alfred Jewel replica is not on display in the church; it was in the safekeeping of the churchwarden, and we were simply fortunate that she had it in her purse at the time.

The East Lyng 'Alfred Jewel' hit the spotlight in 2013 when historian Michael Wood presented the BBC documentary 'King Alfred and the Anglo-Saxons'. Wood visited St Bartholomew's Church and climbed the tower to look out over the site of Alfred's refuge at Athelney. While filming he also talked to the same churchwarden we met and was shown the East Lyng Alfred Jewel. 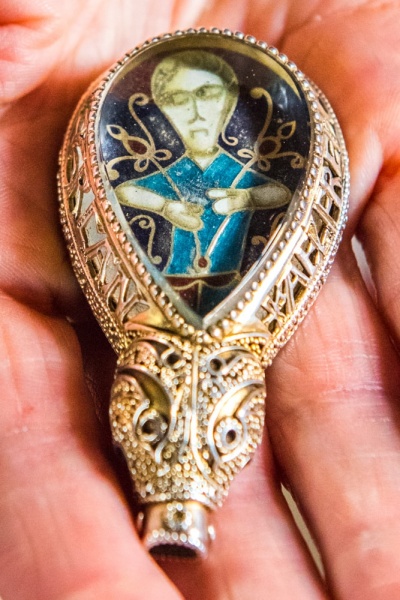 One of the interior highlights is the pulpit, made with carved panels from a medieval screen. Another highlight is the parish chest, made from a hollowed-out tree trunk. The chest is secured with three locks; one each for the vicar, and two churchwardens.

Perhaps the finest historical feature is the wonderful collection of carved bench ends. Even in a county known for its wonderful medieval bench ends these are superb. They were probably carved by the monks of Athelney Abbey shortly before the Abbey was dissolved by Henry VIII. The carvings can be very precisely dated from a carving of a couple in a 'hand-fasting' ceremony, clasping left hands to indicate betrothal. The woman wears a gable coif, a style fashionable in the first half of Henry VIII's reign.

The carvings are fascinating. One shows a man using a pole to vault across rhynes (water ditches used as field boundaries), another shows a miller with sacks of corn. One depicts wrestlers in combat, another shows a boy riding a grotesque beast while facing backwards. One carving shows a fox and a goose, another humorous carving depicts a boy standing on a friend's back so he can reach acorns.

Perhaps the oldest feature of the church is the tub font, which probably dates to the 12th century. 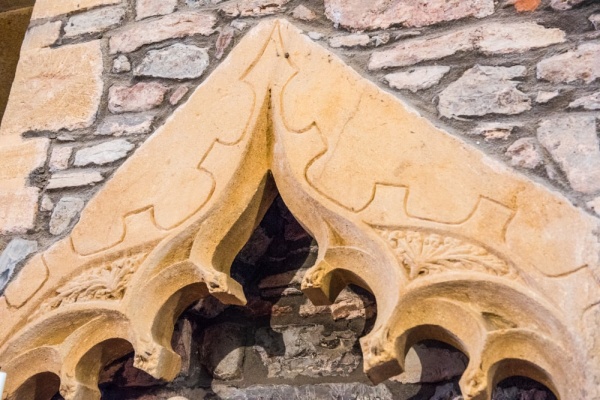 St Bartholomew's is a delight to explore particularly for the outstanding collection of late medieval bench ends.

The only real negative about visiting East Lyng church is finding a place to park. There just aren't any. We drove back and forth through the village several times before we managed to find a place to pull over onto the verge on a lane off the A361. According to the friendly churchwarden people used to park in the village pub across the road but after that closed down the parking area was closed off and, as of this writing, it is difficult for both visitors and locals alike. 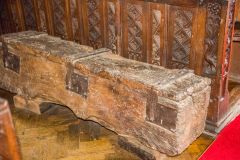 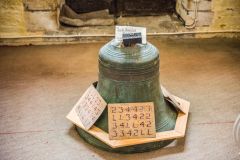 More self catering near East Lyng