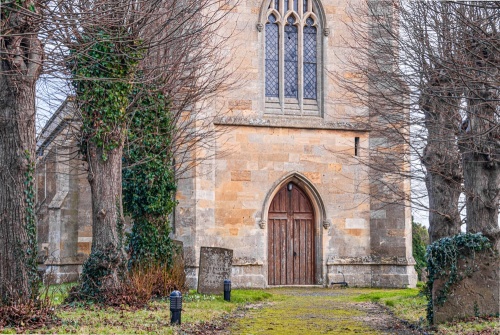 St Michael and All Angels Church in the Warwickshire village of Great Wolford dates to the early Victorian period, though it replaces an earlier medieval building on the same site. It is thought that the slender spire we see today was rescued from the previous church.

The church consists of a nave, entered by way of a west porch topped by a tower, a chancel, and a north vestry. The chancel is very small at just 9 feet deep and 18 feet across (about 2.75m x 5.5m). 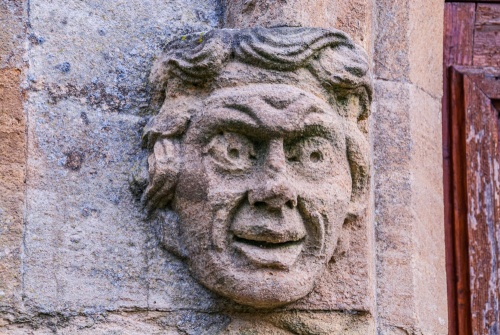 The church was entirely rebuilt in 1833 and restored five decades later in 1885. The spire was struck by lightning and had to be repaired in 1910.

The need for a new church was made dramatically clear to the Great Wolford vicar and parishioners in 1832 when a decayed roof timber collapsed and fell during a church service. Thankfully, no one was hurt, but an investigation quickly revealed that the church was in a dangerously decrepit condition. Merton College, Oxford, holders of the advowson (the right to present the vicar) gave money for a new church, as did several local landowners.

The new church cost £1,350 and was designed by the architect James Trubshaw, more famous for building the Grosvenor Bridge over the River Dee at Chester. Trubshaw's design as 'low church' in style, as suited the general mood of the period, but when it came time for the church to be restored in 1876, the times had changed and a 'High Church' style was deemed more appropriate, so Trubshaw's design was altered, with the chancel raised, the organ and font moved, and the gallery removed. 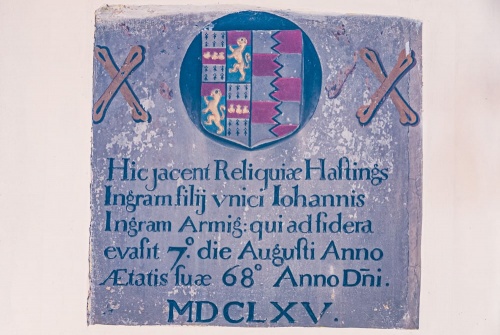 The major historical interest here is a number of memorials from the medieval church. Among these are several ornate wall tablets to the Ingram family, lords of the manor of Little Wolford. Of these, perhaps the finest is a marble monument in the chancel to Hastings Ingram and his wife ann of Little Wolford. It bears the epitaph:

'As they were both justly Valued, and Esteem'd for their piety and Integrity, Hastings Ingram, their grandson, who lies in the North-East part of the Churchyard, Caus'd this Monument to be Erected to their Memory'.

The monument is undated but is almost certainly of late 17th-century origin based on its neoclassical style. Ann Ingram (nee Mollins) was the granddaughter of Sir Thomas Aston, Baronet, of Cheshire. 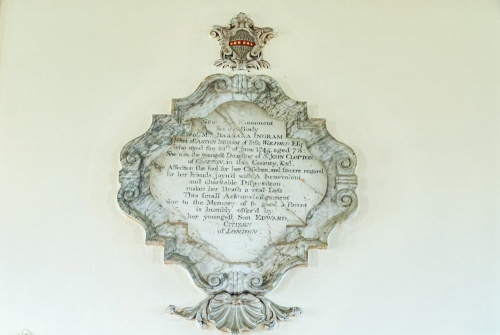 On the opposite (south) wall of the chancel is a memorial to Aston Ingram (d 1711) and his daughter Barbara (d 1737), who gave money for the memorial. On the east chancel wall are two more Ingram memorials, to another Ann Ingram (d 1812) and another Barbara Ingram (d 1835).

Much older is a stone tablet in the nave commemorating Hastings Ingram, son of John, who died in 1665 at the age of 68. Over the tower doorway is a memorial to a third Barbara Ingram (d 1745), the widow of Aston Ingram and daughter of Sir John Clopton.

As if all those Ingram generations with similar names were not confusing enough, there are yet more Ingram memorials set into the floor. The oldest are those of Hastings Ingram (d 1693) and his three children, Edward, Katherine, and Frances, all of whom died before him. Edward died in 1664 at the age of two, and Frances and Katherine tragically died in 1686 on consecutive days! 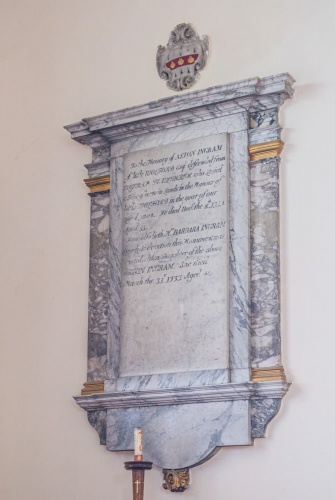 The east window was installed in 1886 and depicts Matthew, Mark, Luke, and John. It was made in Germany by the Heinersdorf & Company of Berlin, the only known Heinersdorf window in England. One unusual feature about this window is that the glass is painted, not stained.

On a stand is the old school bell, installed in Wolford School in 1875 and rung for over 100 years before it was taken down. Alsop stored inside the church is the old parish bier, its large timber wheels shod with iron bands and its frame painted with the phrase, 'The Dead Shall Be Raised'. 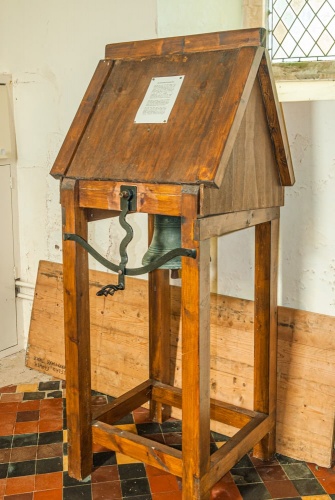 The oldest gravestone in the churchyard is that of Mary Rose (d 1665). This is to be found by the west wall. It seems likely that Mary Rose died of complications from childbirth, for the parish records show her date of death as 15 March 1665, one day after her children Mary and Christopher were born. Mary, the daughter, survived her mother by a single day, a sad reminder of how fragile life was in the late 17th century.

As you explore the church exterior you can't help but notice the beautifully carved heads that act as dripstops for the window mouldings. These are wonderfully expressive and include a crowned figure grimacing. 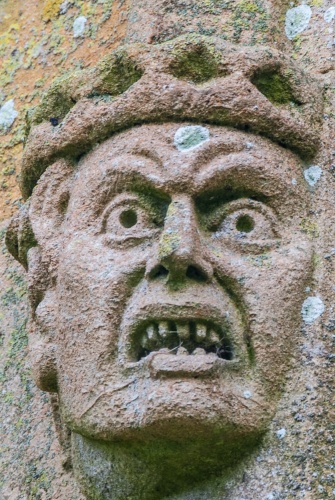 St Michael's Church is on the east side of The Green in the centre of Great Wolford. As far as we could determine, there is no dedicated parking, but there is plenty of space to park along the road verge. The church was open when we visited.