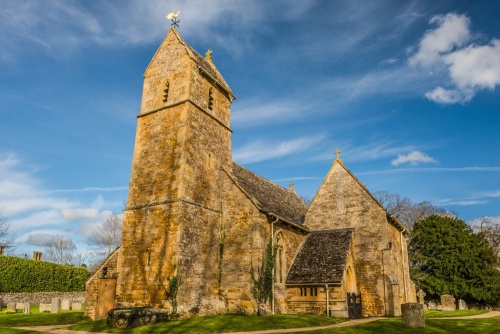 The attractive Norman parish church of Barton-on-the-Heath stands on a rise of ground in the centre of the village, on a site where there has been been a place of worship for over 1,000 years. The oldest part of the present building dates to the early part of the 11th century.

The church is built to a traditional design, with a rectangular nave leading to a smaller chancel, with a west tower and a south porch. Opening off the nave is a south chapel.

The most immediately striking feature of the church exterior is the tower, with its saddleback roof. Though not rare, this style of roof is less common in England. The neighbouring village of Little Compton has a similar tower, suggesting that it may have been built at the same time by the same team of builders. 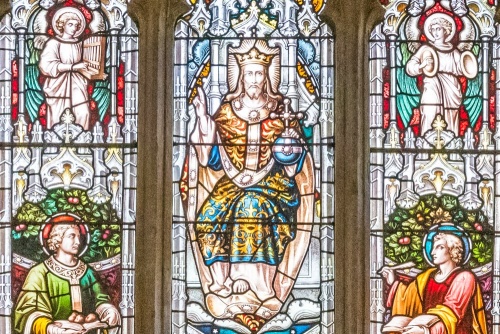 The nave and chancel date to the early 12th century, while the west tower was added later in that same century. The top stage, with its saddleback roof, was an early 14th-century addition. The south chapel was built around 1330, and the south porch is modern.

The church was restored in 1851 by William Butterfield, who would go on to become one of the foremost architects of the Victorian period.

The three-light east window, over the altar, commemorates the Bird family of Barton House, the large manor house that is visible over the churchyard wall. The Birds lived at Barton House from 1741 to 1898. One member of the family was Elizabeth Bird (1730–1798), the mother of the abolitionist William Wilberforce. 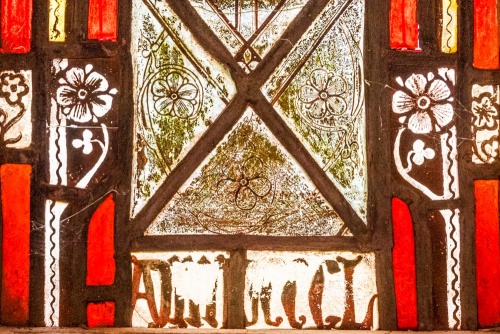 Two single-lancet windows are set into the north wall of the chancel and hold fragments of early medieval glass thought to have been originally installed in the east window. The smallest, nearest the altar, is set within a deeply splayed embrasure so typical of late Saxon and early Norman design.

The official church guide says that this stained glass dates to 1250. I wonder if this is a misprint, as the official English Heritage listing calls it 14th-century glass. The glass features floral designs, a cross, and the gridiron of St Lawrence, to whom the church is dedicated.

The top of the window arch is carved with chevrons, a typical Norman design. The exterior face of the same window opening, however, bears a fragment of much earlier carving in the form of an early 11th-century interlace pattern entwined with a serpent. This Anglo-Danish design suggests that there was a pre-Norman church on this site long before the present building was begun. 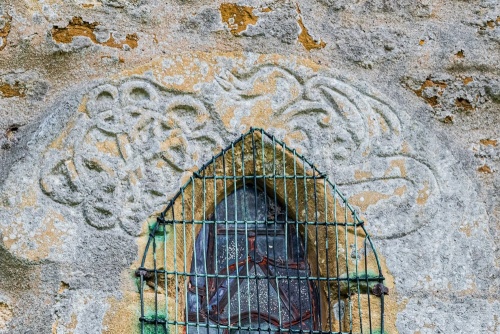 The second window in the north chancel wall, closer to the chancel arch, is also set with more 14th-century glass. At the base of the window is a fragment of glass bearing the date 1350 in Latin numerals. This glass depicts floral patterns and the outline of church towers.

High on the west wall of the nave is a deeply splayed Norman window while below it, linking the nave to the tower, is a round-headed doorway, sunk down into the floor. Both doorway and window date to the 12th century.

The most interesting historical memorial inside the church is a 16th-century brass set into the floor of the chancel in front of the communion rail. This brass commemorates Edmund Marshall (sometimes known as Edmund Bury), who died in 1558. The Marshall family built Barton House, visible over the north wall of the churchyard. 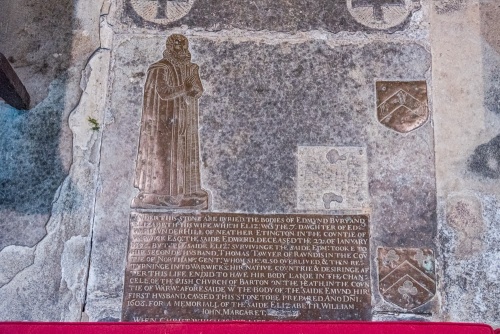 The brass shows Marshall in long robes, his hands clasped in prayer, wearing an Elizabethan ruffed collar. The epitaph reads in part:

Under this stone are buried the bodies of Edmund Bury and Elizabeth his wife, which Elizabeth was the 7th daughter of Edward Underhill of Neather Etington in the county of Warwick, Esq. The said Edmund deceased the 22nd of January 1558 but the said Elizabeth, surviving the said Edmund, took to her second husband Thomas Tawyer of Raunds in the county of Northampton, Gent., whom she also outlived & then returning into Warwickshire, her native county, and desiring after this life ended to have her body laid in the chancel of the parish church of Barton on the Heath, in the county of Warwickshire aforesaid, with the body of the said Edmund her first husband, caused this stone to be prepared AD 1608.

In other words, Elizabeth outlived Edmund by fully 50 years. It is surprising, though, that there is no brass for Elizabeth Marshall, only for Edmund. 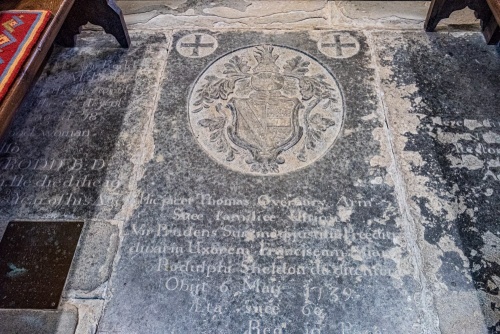 Between the Marshall brass and the chancel arch is a grave slab in memory of Thomas Overbury (d 1739). Overbury's ancestor, also named Thomas, was famously poisoned while imprisoned in the Tower of London in 1613. King James I was vicariously implicated in the murder, which did much to tarnish his popularity. A portrait of the older Thomas Overbury by Sylvester Harding is now thought to actually depict William Shakespeare.

Set into the floor of the south chapel between rows of benches is a grave slab to Overbury's wife Frances, the daughter of Ralph Sheldon of Weston Park in Long Compton, who died in 1731. Perhaps because of its location in the chapel, this grave slab is very well preserved and has a beautifully carved coat of arms.

Other interesting memorials include a wall tablet to William Sands (d 1802). Sands was a Gentleman Pensioner (now called a Gentleman at Arms) under George III. In the south chapel is a tablet to Robert Bird of Barton House, who died in 1874, while on the south wall of the chancel is a tablet in memory of Anthony Weoly (d 1643) and his wife Clement Weoly (nee Fox), who died in 1653.

On the north nave wall is a memorial to Gerard Nettleship, a Lance Corporal in the Imperial Light Horse, who died defending the town of Ladysmith against a Boer attack in 1900. 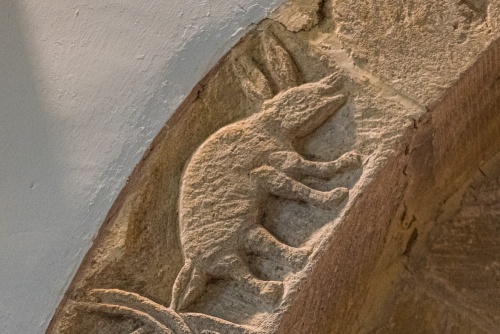 Norman carved figure of a hare

The most intriguing historical feature inside the church is the carving of what appears to be a hare on the altar side of the chancel arch. The hare is crudely carved, suggesting a very early date, certainly no later than the 12th century.

Set into the west end of the south wall is a two-light window under a quatrefoil header. The window glass holds six panels of 15th-century stained glass commemorating members of the Whitfield family of Barton. Their descendants still live in the village today. The panels depict falcons, each in a different pose.

The octagonal font dates to the 15th century. Typical of that period, its panels are decorated with quatrefoils above foliage bosses. 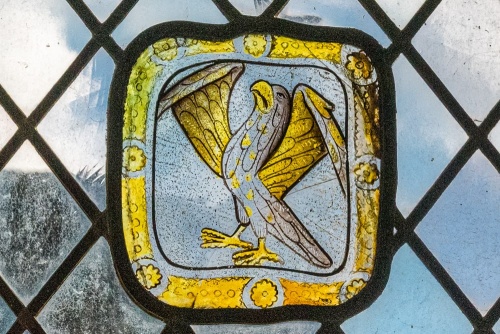 There have been some interesting characters serving as rector in Barton-on-the-Heath over the centuries. One early rector was Gilbert de Welton, sometimes called Gilbert de Makerel, who held the living here in 1323 before going on to become Bishop of Carlisle in 1353, over the objections of the Carlisle Cathedral prior.

A later rector was Thomas Hayward, who served Barton for 59 years and left a bequest for a charity to support local residents long after his death in 1742. A brass plaque in memory of the Hayward family is set into the chancel floor.

From 1782-1807 the rector was James Wilmot, a Fellow of Trinity College in Oxford. Wilmot was a renowned student of Shakespeare, and it was claimed after his death that he believed that Shakespeare's plays were, in fact, written by Francis Bacon. The letters purporting to be written by Wilmot in favour of this view proved to be modern forgeries.

She also claimed that her uncle, Rev Wilmot, was the author of the Junius Letters, an anonymous set of letters criticising the government of King George III.

St Lawrence's Church is a delight, a building full of historical interest, and well worth a visit to see.

St Lawrence Church is set back from the main road through the village, a hundred yards south of the village green. There is no dedicated church parking as far as we could tell, but we managed to park on the verge without any issues. The church was open when we visited. 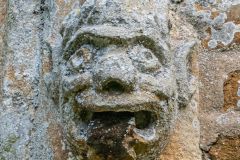 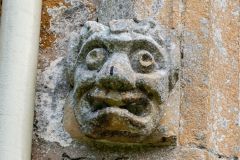 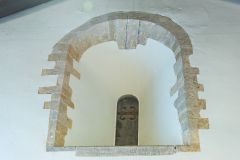 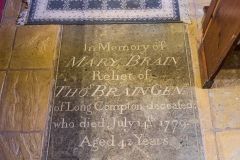 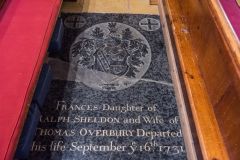