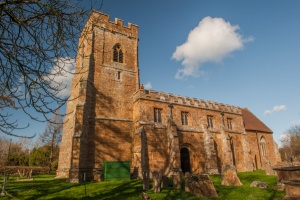 The beautiful church of St Lawrence dates to the 12th century, though the current state of the church owes a lot to several 19th-century restorations, each of which made changes to the alterations made by the previous restoration!

By far the most interesting feature at Oxhill is the exterior face of the south doorway (around the back of the church). The doorway is Norman, and is decorated with intricate carvings. Above the doorway is a length of corbel table, carved with small human heads and an oddly grotesque creature.

The column capitals flanking the doorway are a special treat, beautifully carved with elaborate designs including a grinning creature. The doorway arch has wonderfully crisp and detailed decoration (some of it Victorian restoration work but most original). The overall effect is simply wonderful.

The main entrance is through a 15th-century north porch, which had scaffolding ll around it when we visited on a sunny Saturday in March. The porch protects a Norman doorway, with a carved arch and rater worn capitals. The capitals on the west side show foliage emerging from the mouth of a human face, similar to pagan Green Man carvings. 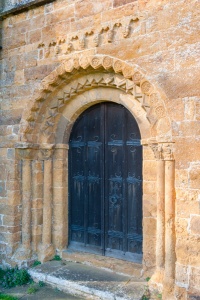 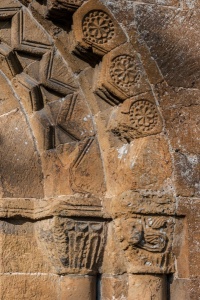 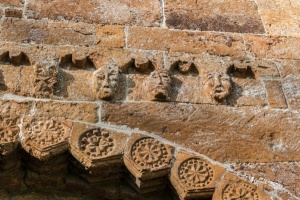 The doorway arch and corbel table 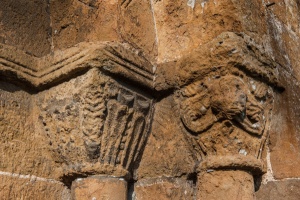 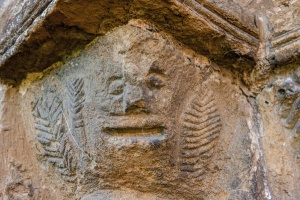 As soon as you enter the nave your attention is caught by the font. This is 12th-century work in a traditional Norman tub style, but it is the beautiful carvings that decorate the font tub that deserves special attention. The entire circumference of the font is carved with blind arcading, and within most of the arcades are elaborate foliage designs. Within two of the west-facing arches however, are naked figures of Adam and Eve. This font was taken from the church in 1817, perhaps because the symbolism teed the incumbent rector. It served as a water tub, and then a flower pot for the Shirley family of Ettington Park. It was finally returned to the church in 1879. 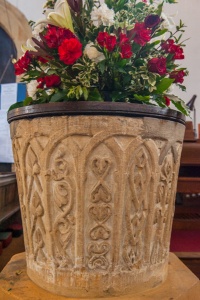 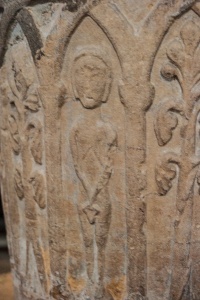 Figure of Adam on the font 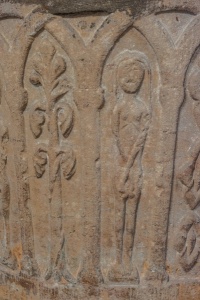 Behind the font, separating the nave from the tower, is a 15th-century screen. This is a cut-down version of a larger screen and was brought there from another church, possibly Oakham in Rutland. It was originally set up across the chancel arch, but the vicar of the day did not like it and had it cut down and moved to the back of the church. In the central aisle are several worn grave slabs. One is to Daniel Blackford (d. 1681). Blackford fought in the Civil War for the Royalist cause. 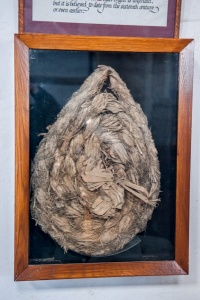 On the north wall, near the chancel arch, is an ancient wreath made of reeds. This was found in the roof timbers during restoration in 1967. It dates to at least the 16th century, possibly earlier.

It is a reminder of an ancient custom that when a young girl died a wreath woven with flowers was hung in the roof until it rotted and fell apart. At that point, the wreath pieces were scattered on the grave. It is remarkable that the wreath has survived at least 4 centuries, and though obviously dried and faded, is still completely intact.

Beside the Maiden's Wreath are carved stone blocks from a piscina, added to the church in 1878 and then removed in 1908 as being 'common modern stonework'. I didn't think they looked that bad!

The chancel arch is 12th-century work, and the north side of the chancel is also Norman. There is a very curious shuttered window in the north wall, with an iron grille behind a wooden shutter. The church guide suggests that this would have been opened during Mass so that villagers could hear the sanctus bell, but surely the villagers would be inside the church at this point? 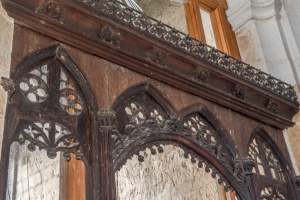 On the south wall is an odd little squint built into the quoin of a 12th-century window opening, but it would not have given a clear view of the altar so its purpose is not clear.

By the altar are memorial slabs to the Meese family. Both Nicholas Meese and his son Walter served as rectos of Oxhill from 1669.

In the south-east corner of the churchyard is a worn gravestone to Myrtilla, 'negro slave of Mr Thomas Beauchamp of Nevis', who died in 1705. Mr Beauchamp is though to have owned a sugar plantation on the island of Nevis, and he married one of the twin daughters of the rector of Oxhill church.

Several of the Beauchamp's children are buried in the chancel. Of Myrtilla, or Myrtle as the name is sometimes written, very little is known, save that she may have been one of three slaves owned by Beauchamp during his stay in Britain.

The fact that the grave lies close to the chancel wall, where the Meese family are buried, suggests that she was held in high esteem by the family. By the churchyard path is the base of a medieval cross, now much worn. It is possible that the cross was destroyed in 1644, during the height of the Civil War, when a troop of Parliamentary cavalry was stationed in Oxhill.

I absolutely loved this wonderful little church. The Norman doorways, particularly the south doorway, are fantastic, but for my money the font deserves special attention The vigorous and lively style of carving so beautifully evokes the Norman era. 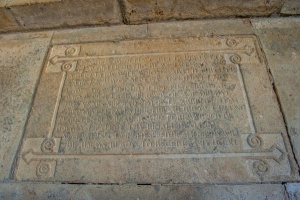 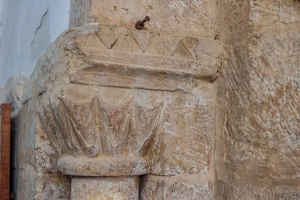 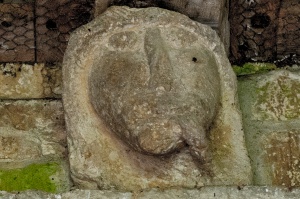 Grotesque carving over the north door 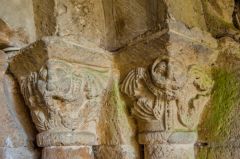 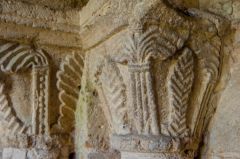 More self catering near Oxhill

More bed and breakfasts near Oxhill