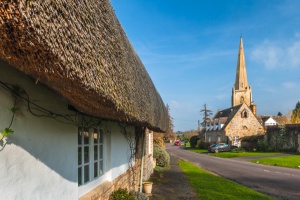 We do not know when the first church was established at Tredington, but it was almost certainly before the 10th century. The first stone church was founded by the Bishop of Worcester in 961 AD, and there are obvious bits of Saxon and later Norman stonework visible throughout the building.

The most obvious Saxon remnant is the range of deeply-splayed lancet windows over the nave arcade. It seems that the Saxon church must have had a very unusual west gallery, reached by an external stair, for you can see fragments of doorways high on the walls, and small lights even higher which would have shed light into the gallery.

During the 12th century, aisles were added to the Saxon building, with the arcades simply inserted in the earlier walls and all the earlier Saxon windows and doors blocked up. The striking west tower was begun in the 14th century.

If you walk around to the south side (the rear of the church) you will find a Norman doorway, with beautifully carved chevron decoration on the doorway arch. The original wooden medieval door has been moved to the north porch where it now acts as the main entrance door. The font is 15th century, in the octagonal design fashionable at that time. Each of the eight sides has carved tracery patterns. 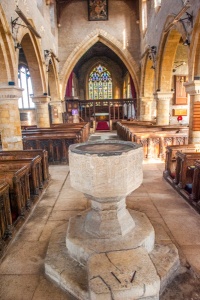 The rood screen is a mix of modern and 15th-century work, but frankly, the screen pales in comparison to the pulpit next to it. This amazingly pretty creation dates to the Jacobean period and has its original sounding board to amplify the vicar's voice. The sides of the sounding board and the pulpit are extravagantly carved.

There is more lovely woodwork in the pews and bench ends, most of which are 15th century. In the floor of the south aisle is a brass to Alice Barnes. The date has been lost, but the style of costume suggests a 16th-century date.

Formerly in the chancel but now on a panel against the west wall of the north aisle are a pair of memorial brasses. One shows a rather sour-looking priest in an attitude of prayer; this is probably 15th century, and possibly Richard Cassey, a rector who died around 1427. Beside the priest is a brass of a kneeling man in the costume of the minor nobility, dated 1482. 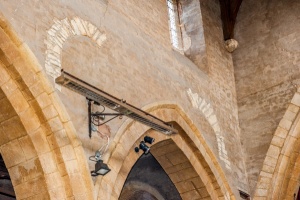 Saxon arches above the nave arcade

Set into the chancel floor are extremely well carved memorial slabs to Mona Parker (d. 1715) and to John and Catherine Parker and their son Henry (died 1751, 1769, and 1769 respectively). What is so compelling about the Parker memorials are the coats of arms, which are carved in relief by a very highly skilled craftsman; the detail is exquisite to see.

In the south aisle is a worn wooden chest, probably 17th century, and beside it is a very peculiar, elongated bench, called a 'Housling Bench', used before the days of altar rails. The 'housel' was another term for the holy sacrament, so the Housing bench was a very simple plank where worshippers knelt to receive the sacrament.

This is the first surviving example I've ever seen in a parish church, and though the information sign and the church guide does not give a date, it certainly looks medieval.

I can't finish this article without saying what a great job someone has done laying out a church trail. There are information sheets at various points of interest throughout the church, full of historical detail and background. Someone has gone to a lot of effort to ensure that visitors enjoy and understand the best historical features of the church. I wish every church did something like this!

If you have a moment, walk to the top of the road (where the thatched cottage is visible) and look back towards the church. On a sunny day, with the thatched building to your left, an Elizabethan house on the right, and the spire of St Gregory's rising high above the surrounding cottages, its as pretty a village sight as you will see anywhere in England. 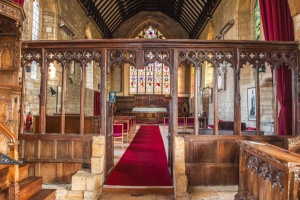 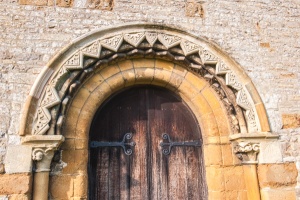 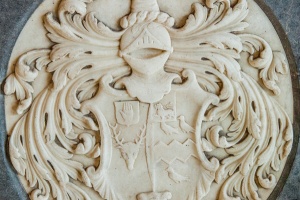 Parker coat of arms in the chancel 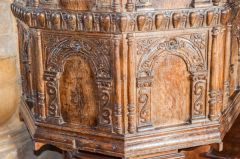 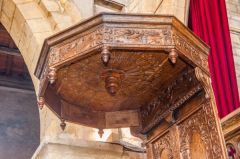 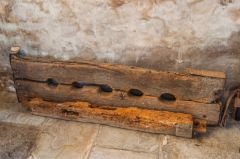 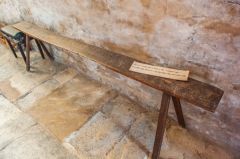 About Tredington
Address: Mill Lane, Tredington, Warwickshire, England
Attraction Type: Historic Church
Location: In the centre of the village, off the A3400 on Mill Lane. For satnav use the postcaode CV36 4NG. The church was open when we visited.
Website: Tredington
Location map
OS: SP258435
Photo Credit: David Ross and Britain Express

More self catering near Tredington

More bed and breakfasts near Tredington