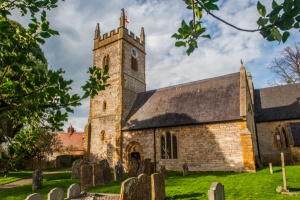 If you approach Halford's pretty parish church from the north it looks for all the world like a late medieval building with some Victorian additions; interesting perhaps, but not of any great age.

Ah, but walk around to the south side of the church and the Norman origins of the church quickly become apparent. There is a blocked south doorway with a typical rounded 12th-century arch and carved capitals, and the slender lancets letting light into the tower are of 12th-century date also.

The south doorway arch and capitals are intriguing, but not nearly so intriguing as what waits inside the north porch. The porch protects another Norman doorway, and this one is a gem. Over the door is a tympanum with a beautifully carved winged figure holding a scroll, or ribbon.

The east doorway capital is carved with an upside-down figure of a human head. The western capital is worn, but bears a fascinating series of small carvings. At the centre is a human figure holding a sceptre and the stem of a plant. The figure is flanked by a griffin and a lion, and below are fleur-de-lys. 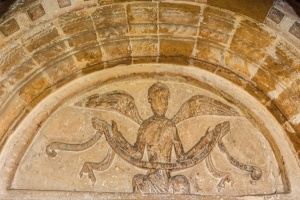 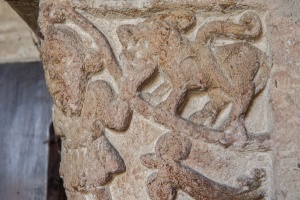 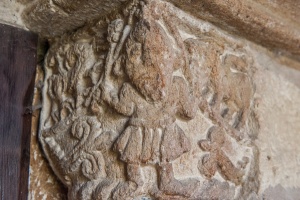 Figure of a man on the north doorway capital

Inside the church there is a 14th-century font, almost overpowered by an elaborately carved oak cover which appears to be 16th or 17th century. The cover rises to a peak where several faces of bishops are joined into one. Behind the font, hanging on the wall, are a couple of fire-hooks; with large iron crooks on the end of wooden staffs, made to haul burning thatch from buildings.

Just in front of the chancel arch is a wonderful 17th century carved chair, made up from pieces of a 15th-century stall which may have come from Kenilworth Abbey. The chair has a tip-up seat made from a misericord, carved underneath with the figure of a bearded man performing a tumbling trick.

On the south side of the 12th-century chancel arch, immediately behind the chair, is a round-headed niche with a very worn statue. There was originally a matching statue niche on the north side of the arch, but this has been filled in. Behind the statue, you can make out traces of colour from medieval wall paintings, though the design is too difficult to make out. 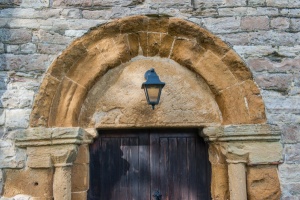 Beside the statue niche is a blocked squint, or hagioscope, now pierced by a slit in the shape of a cross. The capitals of the chancel arch are very simply carved though the north capital has an unusual arrow symbol. Running above the capitals are 12th-century string courses carved with simple dogtooth patterns.

On the north wall of the chancel is a simple tablet to Frances Granger, who died in 1674, and in the nave is a rather nice wall tablet to Mary Plumb (d. 1763).

Throughout the church are obvious reminders of 12th-century construction; the stonework, though repaired, is 12th-14th centuries. One oddity is the north-east nave window, made of red sandstone, and possibly brought to Halford from Kenilworth Abbey at the Dissolution of the Monasteries.

Wow! I loved this church. The setting is fantastic, with Cotswold stone cottages clustered around the churchyard. The age of this simple church and the many, many features of historic interest - especially the wonderful north doorway - make it a pleasure to visit. 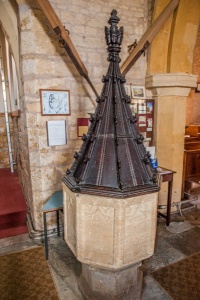 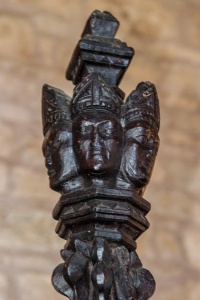 Carved top of the font cover 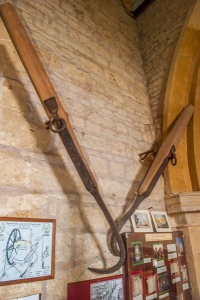 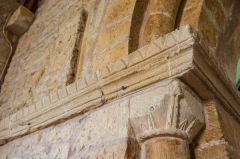 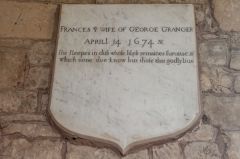 More self catering near Halford

More bed and breakfasts near Halford