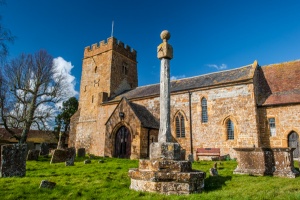 The small village of Whatcote sits in the pretty countryside of south Warwickshire, surrounded by rolling hills and farm fields, an area known as the Vale of the Red Horse after a long-lost figure of a horse cut into the Edgehill escarpment. Whatcote was one of the last places in England to carry out the ancient practise of 'rough music'.

This happened when a couple were found to be living together out of wedlock. Villagers would gather outside their house, banging together metal objects to create a great clamour, and drive the unhappy couple from the parish. Its a much quieter place today, thankfully!

The parish church of St Peter stands off the main road through the village, at the end of Church Lane. There was a church mentioned in the Domesday Book of 1086, but the present church dates to 1168 or thereabouts.

We know the date pretty precisely, for in that year a small shelter was built to provide drinks for the workmen labouring to build the church. This grew in time to become the Royal Oak inn, which must be one of the oldest pubs in the country still in use.

Tradition suggests that Cromwell stayed in the inn before the Battle of Edgehill in 1642, though it would not have born the name Royal Oak until the Restoration of the Monarchy! 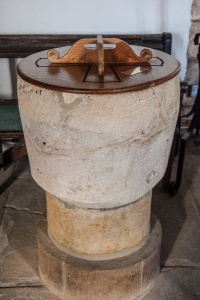 As you pass through the gate into the churchyard you face the east and of the church, and it is fairly obvious that this has been heavily rebuilt recently, with bands of light and dark stone. The reason for that rebuilding becomes obvious when you read the small display set on the nave wall, for like a phoenix, St Peters has risen from the ashes, quite literally.

On the night of 12 December 1940, the German air force raided Birmingham. Returning from the raid a bomber dropped several bombs on Whatcote. The damage to the church was so severe that, seeing the photos, it is hard to believe that it still stands at all. But stand it does, for the bomb damage was repaired, and the church restored to its original layout.

It would be understandable if the bomb damage had left St Peters bereft of historic interest, but nothing could be further from the truth; there is plenty to see in this delightful little country church.

For a start, immediately below the exhibition about the bomb and restoration, a small fragment of one of the bombs is displayed in a small glass case. You enter the church through a 14th-century porch and south doorway of the same date.

The internal door arch is Norman, however. Just opposite the south doorway is a blocked north door of Norman date, flanked by 12th-century windows, and framed by the arch of the doorway is a very simple late Saxon font, suggesting a much earlier church on the site. The font is unadorned, in a plain chalice shape.

There is another 12th century high on the south wall near the pulpit, and a 13th-century window lower on the same wall. A very low 13th-century doorway leads to the tower, and very high on the wall above this is a very narrow, small doorway. No one really knows what this was for, but if may have provided access to a gallery, now long gone.

Near the south door is a grave slab to John Neele (d. 1683) and his wife. Neele was a churchwarden, and one of the rights granted to wardens is that they and their families could be buried in the nave. 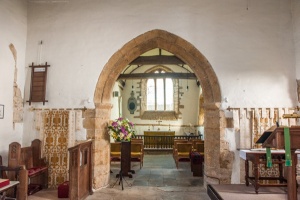 A 13th-century arch leads to the chancel, where there is another 13th-century window over the altar. To the right of the altar, set into the floor in front of the communion rail (and protected by a small carpet when we visited), is a brass to Thomas Audlyngton, rector of Whatcote from 1486-1511. Immediately west of the brass is a worn grave slab to Thomas Nele (rector from 1451-1486), with an incised carving of a cross and chalice.

In front of the altar is a grave slab commemorating Mary Seagrave (d. 1773), wife of rector Thoma Seagrave. Mary had 6 children in 6 years with Thomas, and then died, whereupon Thomas left the village to become chaplain to the Earl of Northampton.

In the churchyard is one more item of great interest; a medieval preaching cross set on a stepped plinth. The cross shaft is topped by a later sundial (possibly 18th century). 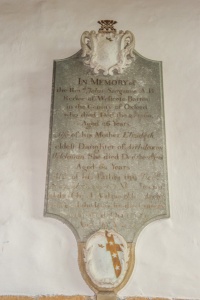 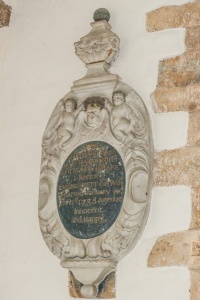 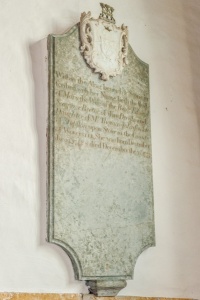 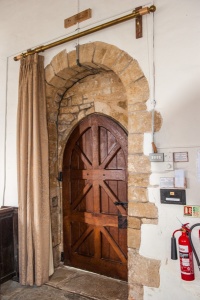 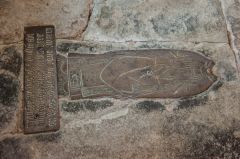 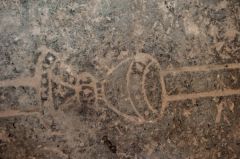 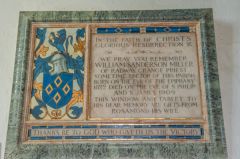 More self catering near Whatcote

More bed and breakfasts near Whatcote