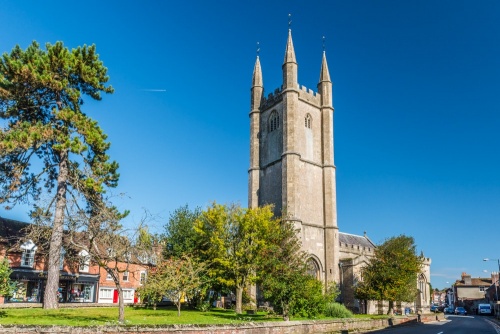 The historic Wiltshire market town of Marlborough boasts two medieval churches, one at each end of the broad High Street. At the western end of the street, occupying a large traffic island, is the 15th-century church of St Peter, easily spotted by its striking west tower.

The church we see today is [at least] the second on this site. The first church was built in the late 11th century and was completed by 1100. It was probably built to serve the inhabitants of the nearby Norman castle, the remains of which can be seen in the grounds of Marlborough School, directly opposite the churchyard.

The castle fell out of use in the 14th century and by the end of that century, stone was being robbed from the castle ruins to rebuild St Peter's Church. By the following century, the population of Marlborough had grown to such a size that the old church was no longer adequate. It was torn down and a larger building erected on the same site. 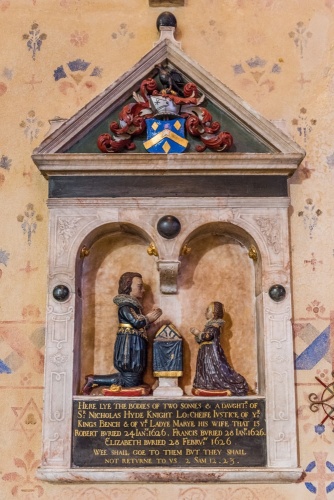 The 'new' church was begun around 1460, with a south porch and priest's door added around 1500. Over the porch is a parvise, a small chamber for the use of the priest.

It was here in St Peter's Church that Thomas Wolsey was ordained as a priest in 1498. Wolsey would go on to become the most powerful man in the kingdom under Henry VIII and serve as the Archbishop of York and Chancellor of England.

Thankfully, the church escaped relatively unharmed from the 1653 fire that destroyed much of Marlborough.

By the Victorian period, the medieval church was in dire need of repair. In 1859 the church was heavily restored by Thomas Wyatt, the diocesan architect. Wyatt replaced the medieval roof, lowered the aisles, added buttresses to the aisles and took out the 17th-century west gallery.

He also installed a new west window with stained glass depicting St Peter and the Four Evangelists. In keeping with Victorian fashion Wyatt had the chancel walls painted, installed painted bosses and created a colourful frieze. He paved the chancel and sanctuary floors with Minton tiles. 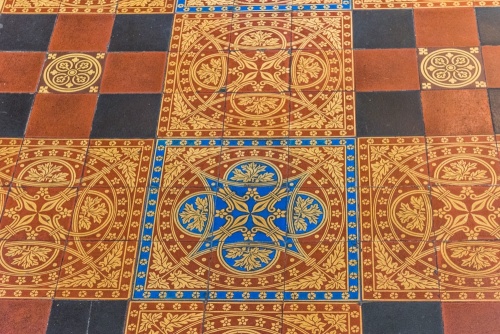 Minton tiles in the chancel

By the 1970s it was clear that Marlborough could no longer support two parish churches. St Mary's, at the eastern end of High Street, was larger and in better repair, so St Peter's was made redundant. It has since been transformed into a vibrant community centre and a venue for lectures, concerts and meetings. There are regular craft markets and a very popular cafe in the nave.

The church has a wonderful collection of memorials spanning the 17th to the 20th centuries. Perhaps the most interesting memorial is to three children of Sir Nicholas Hyde, a Chief Justice of the King's Bench under both James I and Charles I. All three children died within a month of each other in 1626.

Other interesting memorials include James white, the landlord of the Castle Inn, a popular stop on the London to Bath road. The site of the inn is within the grounds of Marlborough College. Then there is the memorial to Henry Baring, an MP in the days when Marlborough was a 'pocket borough' in the control of the Marquis of Aylesbury. Baring was the focus of two public petitions against the influence of landed gentry in political life. 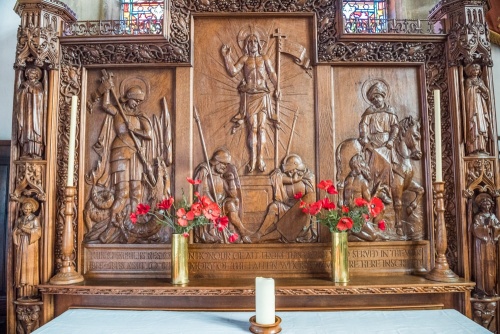 At the west end of the nave is the War Memorial Chapel, established in 1920 as a memorial to local people who died in the First World War. The names of those who died in service are inscribed in gold on panels from Georgian box pews which were removed during the 1863 restoration. The panels were discovered in the stables of the old rectory across the road.

In the north wall of the church is a window dedicated to the 7th Battalion of the Wiltshire Regiment and its commanding officer Colonel Rocke. Look for regimental banners hanging from the wall at the west end of the church.

The tower is open regularly to visitors. There are spectacular views from the top if you dare to tackle the 138 steps it takes to get there! 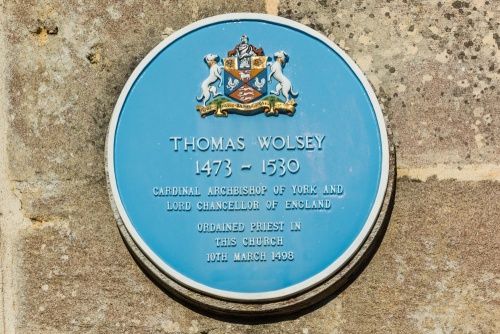 Plaque commemorating the ordination of Thomas Wolsey in 1498

St Peter's Church is at the west end of High Street directly opposite Marlborough College. There is no dedicated parking but Marlborough's main visitor car park (pay and display) is just a few minute's stroll away off George Lane. There is also short-stay parking on the High Street.

St Peter's Church is regularly open to visitors and was open when we visited. It can be a little disconcerting to explore the historical features of the church while dodging around cafe tables and craft stalls, but it is wonderful to see this historic building still being used and appreciated by the local community. 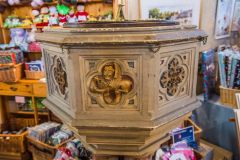 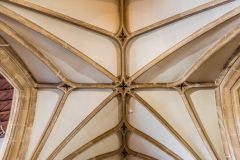 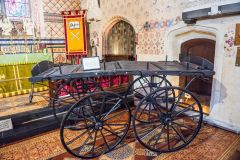 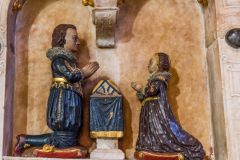 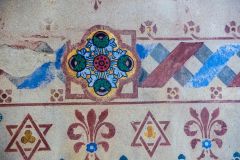