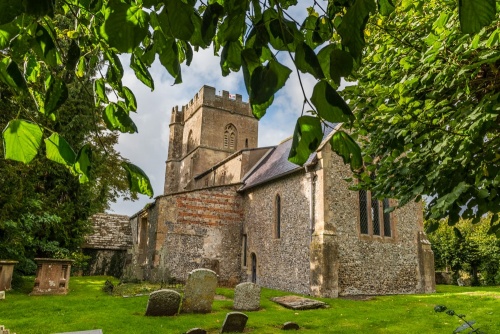 Ogbourne St Andrew is a pretty village in the valley of the River Og, just north of Marlborough. The village name comes from the dedication of its parish church and helps distinguish it from the 'other' Ogbournes, Ogbourne St George and Ogbourne Maizey, to the south.

St Andrew's Church was built around 1140 AD, around the time that the Ogbourne estates were given to the Abbey of Bec in Normandy by the wealthy English noblewoman Maud of Wallingford. The chancel was built in the early 13th century and the west tower added around 1440. The church interior was comprehensively restored in 1847-9 by William Butterfield.

One reminder of the first stone church on this site is a Norman capital in the sanctuary, reused as a double piscina. 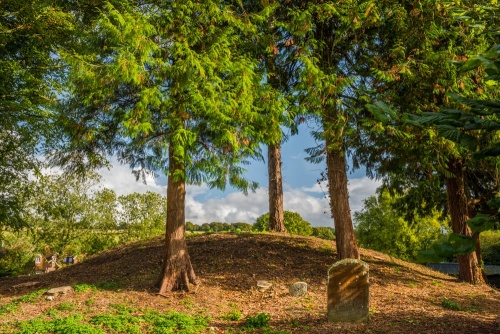 The church stands on a Neolithic earthwork running roughly east to west. In the churchyard is a Bronze Age bell barrow, a rare form of ancient burial site (though you will also see this monument referred to as a round barrow or bowl barrow. The earthwork came first, and the barrow was erected later, between 2400-1500 BC.

When the barrow was excavated in 1885 a Bronze Age cremation was found at the base of the mound. Above this was a Saxon coffin burial, while near the top of the mound were about 20 medieval skeletons that likely formed part of the medieval burial ground surrounding the church.

An archaeological survey in 2013 revealed that a ring ditch encompassed the Bronze Age barrow. The eastern wall of the chancel stands very close to the edge of this ditch, suggesting that it was built to its current size to avoid overlapping the ditch. 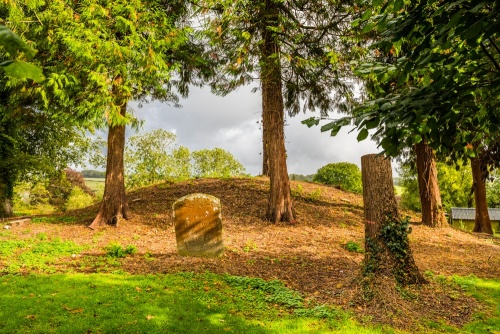 The burial mound from the south

The barrow was measured at 23m in diameter and 1.6m high, with a depression on the top of the mound about 0.3m deep.

Some historians considered the barrow to be the remains of a Norman motte, but that seems very unlikely. The historical record does suggest, however, that the mound supported a windmill in the post-medieval period.

Several gravestones are set into the slope of the barrow, including a Grade II listed 17th-century chest tomb on the northern side of the barrow. 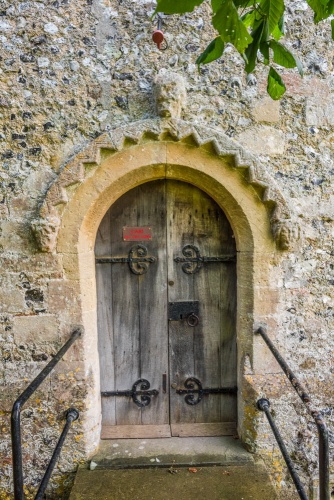 Apart from the barrow, the most interesting historical feature outside the church is the north door, decorated with Norman chevrons. Each end of the hoodmould terminates in a carved head, and a third carved head is set into the wall above the doorway arch.

In the chancel is a poignant alabaster memorial to William and Elizabeth Goddard, erected by their son Thomas in 1655. The memorial shows small figures of the couple's eight children. Six of the eight children hold skulls, indicating that they died in childhood.

In the nave is a wall monument to Ann Seymour (nee Goddard) who died in 1687. on the east wall of the north aisle is a memorial to Sir Samuel Canning (d 1908) who pioneered the use of Transatlantic communication cables. In the south aisle is the gravestone of to Francis Wyer 'with her babe' (d 1692). 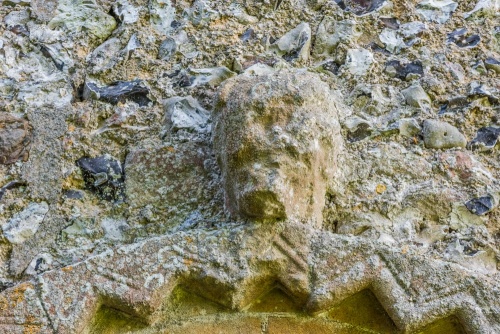 A weathered carved head over the north door

St Andrew's Church is on Church Lane, in the centre of the village, just off the A346. There is no dedicated parking area as far as we could see, but we had no trouble parking along the verge. The church is ordinarily kept locked, but there is a keyholder almost directly across the road.

Even if the church is locked you can still explore the Bronze Age barrow, which is an extremely impressive monument in its own right. There is an information panel at the churchyard entrance giving details about the barrow, the church history, and the now-lost medieval houses in the neighbouring field.

A short stroll from the churchyard brings you to several picturesque thatched cottages.