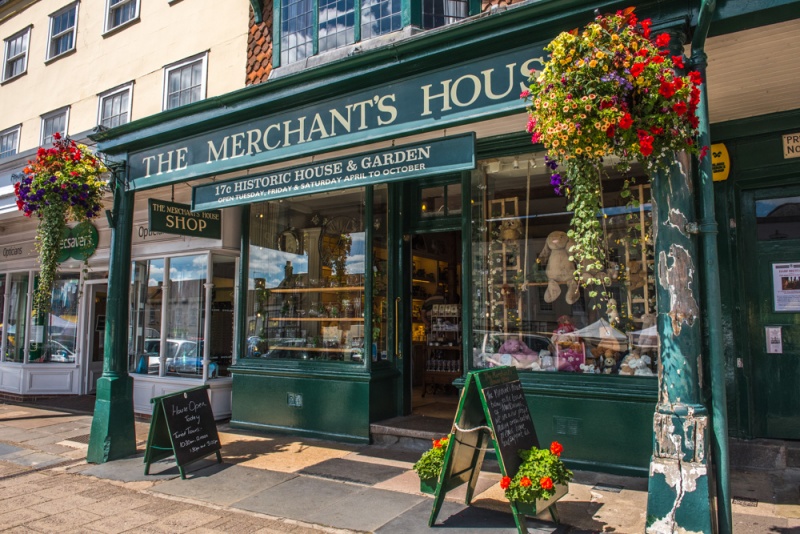 In 1653 a devastating fire swept through the market town of Marlborough. In the aftermath of the fire, a wealthy silk merchant named Thomas Bayly began to build an impressive timber and brick house at the end of Marlborough's long High Street.

Over the next five decades, Bayly and his descendants created a richly decorated house, with colourful wall paintings, panelled rooms, and an impressive oak staircase.

Bayly's home has been restored by a local charitable trust and offers visitors a wonderfully evocative glimpse into the world of a prosperous merchant family.

Eight major rooms are on display to visitors, with the highlight perhaps being the Panelled Chamber. This room was built during Cromwell's Commonwealth, between 1653-1656, and the oak-panelled chamber is almost completely untouched since it was built. The large oriel window has an unusual 17th-century stained-glass panel in the shape of a sundial. 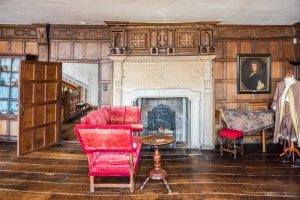 The Dining Room has a striking decorative scheme of vertical stripes running from floor to ceiling. The design dates to 1665 but was hidden under later wall-coverings for centuries and was only revealed in 1991. The design is probably based on silk wall hangings that Thomas Bayly imported from the Netherlands.

The centrepiece of the house is the oak staircase, a beautiful example of woodwork from the Restoration period. The staircase walls have a painted pattern resembling balustrades. This is one of the few examples of painted balustrading in England.

The kitchen is one of the most recently restored rooms in the house. On display is a hand-written family recipe book, which includes such delicacies as fricassee and fritters. There are two family bedchambers, one located above the kitchen, making it the warmest bedchamber in the house. There is also a smaller servant's bedchamber under the eaves. 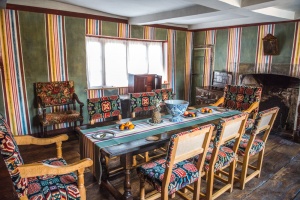 The interior is furnished with period furniture, ceramics, domestic implements, musical instruments, and art. The house is decorated to show how a typical family at the time would have lived, worked, worshipped, and entertained themselves.

There is also a large collection of historic artefacts associated with Marlborough, from medieval to the present time, as well as old photographs of Marlborough and the surrounding area. One highlight is a copy of Foxe's Book of Martyrs, first published in 1563.

Behind the house is a garden designed in the style of a traditional 17th-century townhouse garden. We know from documentary evidence that the Bayly's maintained a garden, though its location is not certain. The design is historically accurate, reflecting what a wealthy Puritan family would have had in their garden. It is on three levels, with a paved terrace at the bottom, rising to a formal parterre, and at the top is a herb garden and an orchard growing old varieties of fruit.

A 17th-century garden was meant to be functional as well as attractive, and this example features plants grown for medicinal use such as hyssop and lavender. There is also a traditional skep for keeping bees, though to keep visitors safe no bees are kept! 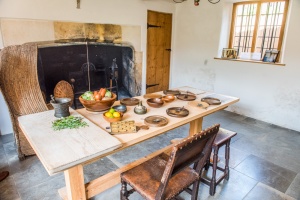 The Merchant’s House Trust also maintains a library of books and other documents relating to 17th-century town life, the silk trade, needlework, wall paintings, and historic oak furniture. The library is open to the public by arrangement.

The Merchants House is also a venue for musical performances, usually held in the historic Panelled Room. If you attend a performance you may well be following in the footsteps of 17th-century diarist Samuel Pepys, who visited Marlborough on 15 June 1668 and heard a musical recital at an unnamed venue. Given that the Bayly's were a leading family and known to be interested in entertaining and music, it is perfectly plausible that Pepys heard the recital in the very same room of Bayly's house.

The Merchants House is open seasonally for regular guided tours, or by arrangement at other times if a guide is available.

We visited on a sunny day in August, just in time for one of the four tours that day. Our guide was excellent, full of information about the house and the objects we could see in the historic rooms.

The tour begins in the Panelled Chamber. This is a beautiful example of a panelled Jacobean room, with period furniture including an original Glastonbury Chair. This type of folding chair was made to take on travels. There are apparently only 10 or so original Glastonbury Chairs in England, so the Merchants House example is a real treasure. Near the chair is a sideboard decorated with superbly detailed carvings.

The tour took in several bedchambers furnished with 17th and 18th-century furniture. The guide speculated that one of the bedchambers might have been used for weaving, as it was illuminated by windows on two sides.

The highlight of the rooms on view for the tour is the Dining Room. The painted walls with their vivid stripes are stunning. Look for Elizabethan coasters with painted rhymes; they are like a 16th-century version of a Christmas cracker.

We thoroughly enjoyed our tour of the house and highly recommend a visit. It is an exceptional example of a 17th-century townhouse. 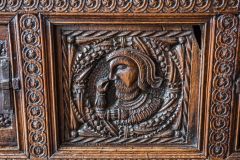 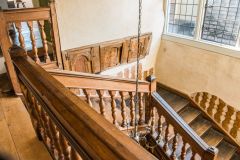 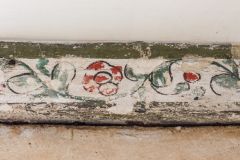 More self catering near The Merchant's House Marlborough

More bed and breakfasts near The Merchant's House Marlborough