The heritage coast runs from Arne, in Poole Harbour, along the southern shore of the Isle of Purbeck to Weymouth Bay. The Purbeck area is famous for Purbeck Marble (which isn't marble, but crystalline limestone). This "marble" has graced many of the most illustrious buildings in English history, notably Salisbury Cathedral.

Purbeck is not actually an island; the "isle" is surrounded by the sea and the River Frome on three sides, but marshy ground south of Wareham made access to the area almost impossible.

The name "Purbeck" derives from Saxon which very roughly translates as "beak-shaped ridge which is home to bittern or snipe". The high chalk ridge the Saxons were referring to was the only road into Purbeck until a causeway was built across the marshes towards Corfe.

At the eastern end of the heritage coast, the isolated peninsula of Arne is the site of an RSPB bird centre and nature reserve. Another popular nature reserve exists on Brownsea Island in Poole Harbour, where a large colony of red squirrels has survived the incursions of their grey American counterparts.

Durlston Head, just south of Swanage, is a nature park run by the Dorset County Council. The facilities include a birdwatching station. The Durlston area has yielded fossilized remains of many many dinosaurs, reptiles, and early mammals.

At the southernmost tip of Purbeck is St Aldelm's Head, named after the first bishop of Sherborne. The small medieval chapel of St. Aldhelm on the headland is topped with a beacon for warning ships of the dangerous tides below. 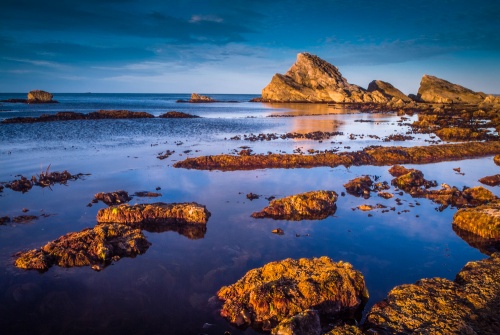 Midway along the heritage coast is the famous beauty spot of Lulworth Cove, graced with the striking limestone arch of Durdle Door. The arch was formed by seawater eroding the chalk and leaving stronger limestone to support itself. In calm weather, a boat can pass through the arch.

The circular bay of Lulworth is a well-frequented beauty spot and the home of the rare Lulworth Skipper butterfly. Despite its popularity, Lulworth remains relatively peaceful, as access is limited to two minor roads.

Dorset AONB
This Area of Outstanding Natural Beauty takes in the heritage coasts of Purbeck and West Dorset, and stretches inland to cover the broad chalk valleys and ridges of central Dorset. On the coast are the pebble bank of Chesil Beach and the great arch of Durdle Door at Lulworth Cove.