Home > Heritage Traveller > More places to visit in the Cotswolds

More places to visit in the Cotswolds 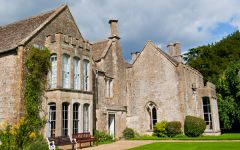 Yesterday I posted a list of places to visit in the Cotswolds, something I threw together as possible destinations for friends visiting the area. Most of those locations were in the north Cotswolds, so I thought I'd give equal billing to interesting places in the south Cotswolds. I'm not going to be pedantic over what constitutes 'north' v 'south'; think of this list as a 'Cotswold Greatest Hits, Volume 2'!

Painswick - this picture-perfect Cotswold town is famous for its church, set in a churchyard with yew trees. Each year there is a traditional ceremony to clip the trees. A legend says that if you try to count the yew trees you will never get the same total twice. Just outside the town is Painswick Rococo Gardens, a wonderfully fanciful garden in a Baroque style.

Tetbury - an attractive market town built around a historic market hall. Each year contestants in the Woolsack Race run up Tetbury hill carrying a heavy sack of wool on their backs. Nearby is Chavenage House, a wonderful manor that has been used in several films, including the Hercule Poirot television series.

Malmesbury - another historic market town, with a medieval buttercross just steps away from Malmesbury Abbey, the remains of a medieval monastic church that now serves as the parish church. Nearby is beautiful Abbey House Gardens, once owned by the abbot of Malmesbury and now the home of the 'naked gardeners'.

Dyrham Park - a marvellous stately home, used as the setting of the Anthony Hopkins film, Remains of the Day.

Owlpen Manor - seemingly lost in a steep, wooded valley is this delicious medieval manor house of warm stone. Don't miss the tiny church behind the manor.

Woodchester Mansion - the unfinished Victorian mansion at Woodchester is a marvel; a superb example of Victorian Gothic. It was left unfinished and would have been lost but for the efforts of local volunteers.

Berkeley Castle - probably the most important historic building in the Cotswolds, Berkeley Castle was the scene for Edward II's grisly murder. The terraced gardens are a delight.

Westonbirt Arboretum - just south of Tetbury is probably the most popular arboretum in England. People flock to Westonbirt each autumn for the superb Fall colours, but at other times it is a delightful place to wander in a natural setting.

Cirencester - The Roman Corinium, the town of Cirencester packs a lot of history into a small area. Much of that history can be traced in the wonderful Corinium Museum. You can still see the overgrown amphitheatre the Romans built on the southern outskirts of town. More impressive is the imposing parish church of St John the Baptist, with a superb vaulted entrance porch.

Quenington - here's a little-known gem; the parish church of this pretty little village has a marvellous Norman doorway, a symphony in early medieval carving.

Elkstone - here's another secret gem; the church at Elkstone has a dovecote built over the chancel.

Bibury - definitely not a secret gem, Bibury gets mentioned in every guidebook on the Cotswolds. Yes, it can get busy, but it is worth a visit. Come in the early morning and walk along the wonderful old weaver's cottages of Arlington Row. Don't miss the church, just up the road from the Row, and stop for a pint at the ivy-clad Swan Hotel by the bridge.

There, that should give you a few ideas to go on!

Set in the splendour of the Barle Valley, Simonsbath House stood alone for over 150 years before the small hamlet of Simonsbath developed in the 19th Century. This 350 year old house retains many of … more >>