Home > Heritage Traveller > Places to visit in the Cotswolds

Places to visit in the Cotswolds 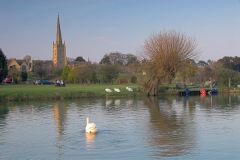 Some friends of ours are visiting the Cotswolds, so I sat down to prepare a list of some places for them to consider visiting while they're here. Once I got started it was hard to stop, and it occurred to me that readers of BritainExpress might enjoy the recommendations. These are all places we enjoy visiting, with a mix of towns, villages, attractions, and countryside walks thrown in, as well as a few pubs we've enjoyed stopping at. Looking at the list I can see that it is heavily weighted towards the North Cotswolds. I shall have to remedy that and come up with a list of some favourite places to visit in the South Cotswolds!

So, in no particular order here are my ...

Favourite places in the Cotswolds

Icomb - a small village near Stow on the Wold, where the original Tom, Dick, and Harry lived. The men were brothers, and it is said, notorious highwaymen, who hid their booty in secret tunnels under the church.

Lower Oddington - the small and secluded church stands in a copse of trees at the end of a shady lane. Within, almost forgotten by time, is a series of stunning medieval wall paintings, some of the best in Britain.

Northleach - a picture postcard market town with one of the finest 'wool' churches in Britain, a testament to the wealth of the area in the medieval period. The brass memorial of the founder is set on the floor by the altar.

Stow-on-the-Wold - a lovely market town, site of the last battle in the English Civil War. It is said that the name of Digbeth Street, off the market square, is a corruption of 'Duck's bath', because after the battle ducks were bathing in the pools of blood. Prisoners were kept overnight in the church, where one carved his name on the lead lining of the font.

Chedworth - home to one of the most important Roman villas in England, built on a secluded hillside. Within the ruins is one of the best-preserved pieces of Roman mosaics in the country.

Winchcombe - another postcard town, with ancient timber-framed houses, a series of gorgeous almshouses, and a church famous for its amusing gargoyles. A stroll from the church brings you to Sudeley Castle, where Katherine Parr, last wife of Henry VIII, is buried. A longer stroll brings you to Belas Knap long barrow, an ancient tomb looking out over the valley.

Hailes Abbey and Church - in a peaceful riverside setting stand the ruins of medieval Hailes Abbey, and nearby is an 11th-century church with impressive wall paintings.

Lechlade - this lovely riverside town lies on the border of Gloucestershire and Wiltshire. Walk along the Thames Path to St John's Lock, where you will see the statue of 'Father Thames' and watch boats going through the pretty lock. Take a break at a 14th century Trout Inn beside the river.

Fairford - this attractive village boasts a fabulous wool church with perhaps the finest collection of medieval stained glass in England. Outside the church look for the tomb of the church cat.

Tewkesbury - marginally outside the Cotswolds proper, the old section of town retains its medieval alleys, and a set of timber-framed almshouses looks towards Tewkesbury Abbey, a superb church that is every inch as interesting as many a cathedral.

Burford - once a major river crossing in the medieval period, the 'ford' was replaced by a packhorse bridge and local merchants charged a toll for travellers to cross. The bridge is still there, as is the medieval Tolbooth used by the merchant guild. A short stroll away is Burford Priory, where Charles II trysted with Nell Gwynn. In the other direction is Burford's parish Church, a superb medieval building with a striking tower.

Lower Slaughter - a picturesque Cotswold beauty spot, with lovely walks along the meandering River Eye past a restored mill. The name has nothing to do with mayhem; it comes from the same root as 'slough', or low-lying ground.

Bourton-on-the-Water - the 'Venice of the Cotswolds', this lovely village is known for its many footbridges over the River Windrush, and its wide green. Come in the evening when the crowds are gone and have a quiet pint at the King's Bridge pub, and watch the ducks paddle in the slow-moving river.

Chipping Campden - the quintessential Cotswold market town, with a fabulous medieval market, a marvellous collection of historic buildings, and an attractive church. A few miles away are Hidcote and Kiftsgate gardens. Hidcote gets all the acclaim, which is no surprise as it is a lovely garden, but right across the road is Kiftsgate, a wonderful hillside garden built below an historic manor house. In my eyes Kiftsgate is every bit as enjoyable as Hidcote, and will be practically guaranteed to be less crowded! Make an afternoon of it and see both together.

There you have it. I could go on and on - in fact, I will. Stay tuned for more.

<< Countryfile magazine awards - More places to visit in the Cotswolds >>

Nestled at the bottom of a secluded driveway Letham House is located just outside the small market town of Haddington in East Lothian. This beautiful area is just a short drive from Scotland's capital city … more >>