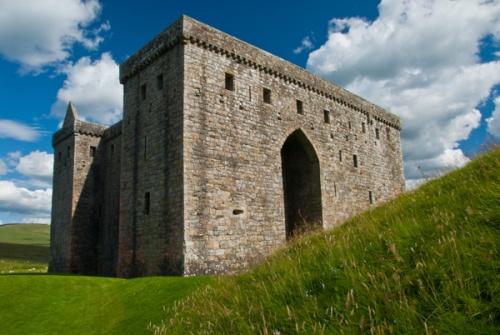 Historic Scotland calls Hermitage Castle an eerie ruin, and the Royal Commission on the Ancient and Historical Monuments of Scotland calls it the most perfect example of a medieval castle in the Borders. It is both.

This curiously named fortress is named for a hermit, a holy man, who dwelt by Liddel Water, in the wild and remote hills of Liddesdale between Scotland and England. These border lands were a constant scene of violent raid and counter-raid throughout the medieval period, so it comes as no surprise that author George Macdonald Fraser called Hermitage Castle 'the guardhouse of the bloodiest valley in Britain'.

Nicholas de Soulis, or Soules, erected the first stone fortress here in 1242, one the bank of Hermitage Water in the Larriston Fells. It seems a curious place to build a castle, for there are no natural advantages to the location. It seems that de Soulis was relying entirely on the marshy ground, which was probably enough to discourage any attacker in all but drought conditions.

The site was partly enhanced by a system of low ramparts and ditches joining several small streams. The fortress enclosed a small court. The English king, Henry II, objected, claiming that the castle was too close to the border. The incident raised tensions between the countries so high that the English threatened invasion. 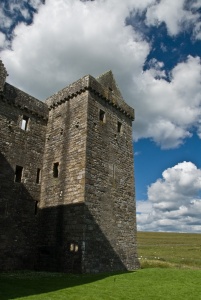 A descendant, William de Soulis, inherited the castle in 1318. Now this de Soulis was said to be a witch. He was accused of abducting children and using their blood in dark magical practices, safe in the knowledge that a prophecy that said he could not be harmed by steel nor bound by rope. These prophecies always seem to have a twist to their words and so it proved with de Soulis.

The local populace rose up and seized him. He was bound by bands of lead and boiled to death in a brass cauldron at the stone circle of Ninestanes Rig.

Another version of the story says that he was killed by True Thomas, who bound him in ropes made of sand and boiled him in molten lead. Well, it makes a good story, but he actually died in prison at Dumbarton Castle.

The castle is said to be haunted by victims of Lord Soulis, and in fact, it has a reputation as one of the most haunted castles in Britain. There have been sightings of figures at upper windows that are impossible to access, and mysterious sounds when there is no one present.

In 1320 the de Soulis family became embroiled in a plot to kill Robert the Bruce and were ousted from Hermitage Castle. The castle changed hands several times during the Scottish Wars of Independence until it was finally taken by Sir William Douglas in 1338.

The oldest parts of the current castle date to this time, and have much more in common with castles in northern England than with any contemporary Scottish design. Douglas wanted the important post of Sheriff, but there was a rival for the position in the person of Sir Alexander Ramsay. Douglas seized his rival and threw him into the dungeon, where he starved to death. 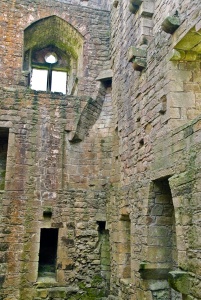 But Douglas himself was to meet a violent end. In 1353 he was murdered by his own godson. His successor was an Englishman, Hugh d'Acre (de Dacre). Dacre's successor was William, 1st Earl of Douglas, and it is to him that we owe much of the castle we see today. In the 1390s the 3rd Earl of Douglas added huge corner towers to the defences.

The Hermitage is very much built for defence, not for comfort. The Douglas family gained in power and influence over the ensuing century, but their very power raised suspicion and antagonism. James IV ordered the Douglas Earls of Angus to trade Hermitage for estates close to Glasgow, and the castle came into the hands of the Hepburn family.

One of the most famous of the Hepburns is responsible for the most vividly remembered event in the castle's long history. In 1566 the owner of the Hermitage was James Hepburn, better known to history as the 4th Earl of Bothwell. Bothwell had enormous influence at the Scottish court of Mary, Queen of Scots, and was almost certainly the queen's secret lover.

In October of 1566, the Earl was wounded in a skirmish with reivers and was carried to his castle to recuperate. When the queen heard the news, she impetuously set off from Jedburgh with her retinue on a wild ride to be at Hepburn's side. It was probably the worst choice she could have made politically, but Mary was not always given to carefully considered moves!

Her hell-for-leather ride covered 25 miles through a barren and wild landscape, to spend only two hours with the Earl - for to spend more time with him could be seen as flouting propriety to an extent that even Mary would not countenance!

On her return journey, she took a fall from her horse into a marsh (the location near Windy Edge is now called Queen's Mire) and contracted a fever from which she almost died. The fallout from Mary's escapade was to turn many of her supporters against her, and that would only escalate when she married Bothwell the following year, shortly after the murder of her second husband, Lord Darnley, a murder in which Bothwell was heavily implicated. Mary's ghost is said to haunt the castle ruins.

As for Bothwell, he died far from Hermitage Castle, in Norway, where he was attempting to raise an army to restore Mary to the Scottish throne. At his death, the castle passed to his nephew, Francis Stewart. Stewart was suspected of involvement with the North Berwick Witches in 1591 and his estates were seized.

The 'witches' were accused of operating a coven, and their trial was the first major witchcraft trial in Scotland. The Earl was pardoned in 1593, but couldn't keep out of political intrigue and was attainted by Parliament later that year, and the crown once again took his estates. In 1594 James VI granted Hermitage to the Scott family of Buccleuch.

But by that time the fortress had outlived its military usefulness. It had no adequate defences against artillery and was abandoned to decay. That decay was arrested in the 19th century when the writings of Sir Walter Scott helped raise Scottish pride in their heritage, and the Buccleuch family acted to preserve the site. It is now in the care of Historic Scotland. 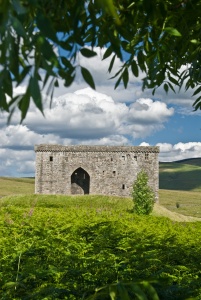 A few hundred yards to the north-west of the castle is an atmospheric ruined chapel dating to the 13th or 14th century. This was probably built to serve the inhabitants of the castle. At first glance, it seems a puzzle that is so far from the castle walls, but it is actually well within the outer system of ditches, banks, and streams that served to enclose the site.

Beside the chapel is a mound said to be the grave of a giant named Cout o' Keilder. This giant was said to have terrorised the region and was invincible due to his magical chain mail. Ah, but in folklore, there's seldom such a thing as truly invincible; the giant was drowned in a pool in the nearby river.

Even today this part of the river is known as the Drowning Pool. A less fanciful version of the tale is that the giant was actually a chief of the men of Kielder, now in northern Northumberland, and he was in conflict with William de Soulis (the wizard). He attacked de Soulis at Hermitage and was forced into the river by de Soulis's warriors, where he died in the deep water. The mound was excavated recently and was found, sadly, to contain no bones at all.

We travelled to Hermitage from Melrose, and it seemed that every mile of the route became more desolate and wild, the sky felt heavier, and the landscape more bleak and unwelcoming. By the time we arrived at the castle, I felt as if there was no place on earth I would less like to live than in this wild place.

Yet exploring the castle was wonderful. The sheer height of the walls filled me with a sense of awe. The astonishing height of the arched entrance seems to be made for giants! I looked up at the walls and they seemed to hover over me, dominating the sky, and making me feel small and insignificant. There is just something about this place; it is romantic, bleak, even frightening, in a way, but compelling. I can see why artist JMW Turner came to paint Hermitage Castle. 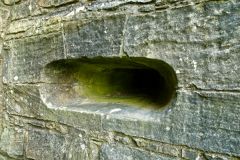 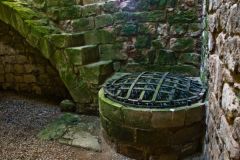 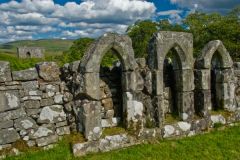 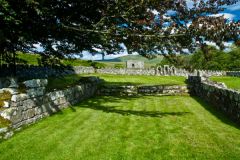 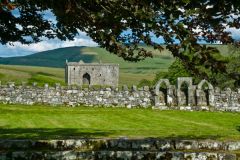 More self catering near Hermitage Castle