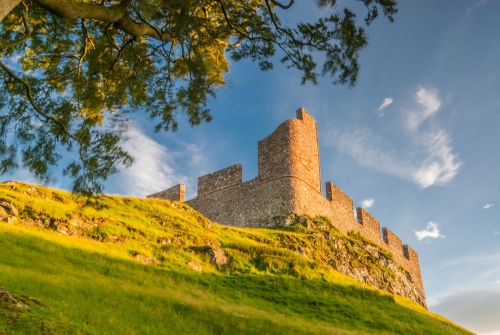 Hume Castle occupies a commanding position on a high hill between Kelso and Greenlaw. Its prominent position gives it vistas unequalled in the Scottish Borders, with views to the Lammermuir Hills to the north and the Cheviots to the south.

The castle stands in a strategically important location in the eastern Borders, an area commonly called the Merse. The location made it a target for both English and Scottish armies over the years, and first one side then the other seized the castle and then burned it rather than let it be used against them.

There may have been a fortification here as early as the 12th century but the documented history of Hume Castle begins in 1214 when the estates were given as a dowry to Ada, the daughter of the Earl of Dunbar, when she married William de Courtenay. 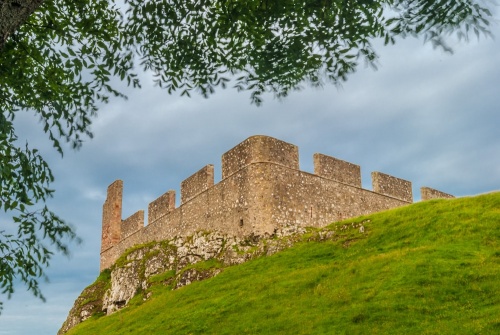 William and Ada began Hume Castle on a natural outcrop of rock high above the Merse and just 5 miles north of the English border. This first castle was a simple rectangular fortification around a central courtyard. Despite its close proximity to the border, Hume Castle never had strong defences. It was used more as a beacon to warn of approaching trouble than as a strong defensive position.

In 1460 James I stayed at Hume Castle during his siege of nearby Roxburgh Castle. The unfortunate king died in the siege when one of his own guns exploded.

In 1513 Alexander, the 3rd Lord Home, fought at the Battle of Flodden, where both King James IV and his son were killed. Legend says that Alexander took the king's body from the battlefield and hid it in a cave linked to the well at Hume Castle. In the Victorian period, a skeleton was found in the well with a chain around its waist.

Was it the skeleton of King James? Unfortunately, we will never know, as the bones were lost and have never been recovered.

As for the 3rd Earl he was accused of treason and executed by the Regent Albany on trumped-up charges. Albany installed a French ally, the Chevalier de la Bastie, as Warden of the Marches and gave him Hume Castle to administer his territory. The Earl's relative, Sir David Home of Wedderburn, killed the Chevalier and stuck his head on a pole in the centre of Duns.

In 1547 George, the 4th Lord Home fought at the Battle of Pinkie, leaving his wife Mariota in charge of the castle. Lord Home was killed in the fighting and their son Alexander was captured by the English. The English threatened to execute Alexander Home unless Lady Mariota surrendered the castle to them, which she did.

The English took control of Hume Castle and, true to the agreement, released Alexander from custody the following year. Alexander immediately raised a force of men and recaptured Hume Castle after just a year of English rule. He took horrible revenge on the garrison, slaughtering them all.

Alexander could not keep out of trouble, however. Initially opposed to the rule of Mary, Queen of Scots, he switched sides in 1569 to support the exiled queen's cause and joined the garrison occupying Edinburgh Castle on her behalf. English troops led by the Earl of Sussex attacked Hume Castle in retaliation. When Edinburgh Castle fell, Home was imprisoned and died two years later in captivity.

Almost a century later Parliamentary forces invaded Scotland as part of Oliver Cromwell's plan to destroy Border fortresses that might be a threat to his New Model Army. 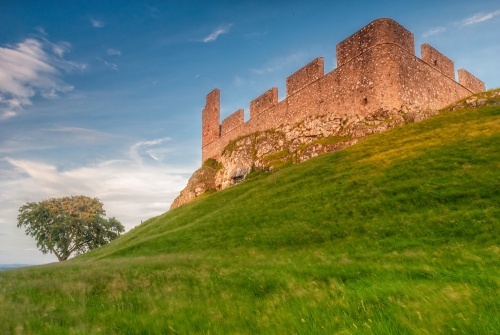 Hume Castle from below

Soldiers under Colonel Fenwick, the Governor of Leith and Edinburgh Castle, led an assault on Hume Castle. The English did not waste energy with a direct attack; they bombarded the medieval castle walls with heavy artillery and destroying the walls and leaving the castle a shattered ruin.

In 1746 government troops briefly occupied the ruined castle as part of their campaign to counter Bonnie Prince Charlie's bid for the throne.

The castle ruins were restored as a picturesque folly by Hugh Hume, the Earl of Marchmont in 1789. It was Marchmont who built the high curtain wall that we see today. Within the curtain wall you can see a section of ruined wall that formed part of a medieval tower. The Earl built the castle with exceptionally large crenellations, just so it could be easily seen from his mansion of Marchmont House eight miles away.

During the Napoleonic Wars, Hume Castle was once more used as a beacon, this time to warn of a French invasion, which was feared to be imminent. On 31 January 1804, some charcoal-burners at nearby Dirrington Law lit a fire as part of their charcoal production process. The leader of the Hume Castle garrison mistook their fire for an alert and lit his own beacon.

The alarm spread quickly across the Scottish Borders and a volunteer force of some 3,000 assembled, ready to fight off an attack by the non-existent invaders. The ultimately comical episode became known as the Great Alarm. When it became obvious that there was no French invasion a dinner party was held to celebrate how quickly the system of beacons had worked and the speed of the armed response.

The castle was taken over by the Department of Agriculture in 1929 but purchased by the Hume Castle Preservation Trust in 2008. The castle is open to the public without charge.

You will sometimes see Hume Castle spelt as 'Home'. The confusion is understandable and goes back to the origin of the name and the family that owned the castle for centuries. Home comes from the Old English word 'hom', meaning a place on a hilltop. Hume Castle certainly fits that description.

According to the Friends of Hume Castle the name has been spelt 8 different ways over the centuries, though it was always pronounced 'hume'. The castle, village and barony were all spelt as 'Home' until the 18th century, but are all now spelt as Hume, the way it is pronounced.

The Home/Hume clan takes its name from the castle.

An amusing - though untrue - story says that the family name was Home until 1513. According to the tale, Alexander, Lord Home, led his men at the disastrous Battle of Flodden against the English. He cried out 'A Home! A Home!' to exhort his men into the fray, but some of them misunderstood the cry as a command to go home, so they left the battlefield. To avoid any sort of confusion in future the name was changed to Hume.

In reality, the name was always pronounced 'Hume' no matter what the spelling, so the story is just that; a story.

Hume Castle is extremely easy to find. In fact, it is hard to miss; the hill on which it stands dominates the surrounding landscape and you can see the castle from miles away. It stands in the village of Hume just off the B6364 about four miles north of Kelso, on the way to Greenlaw.

More self catering near Hume Castle