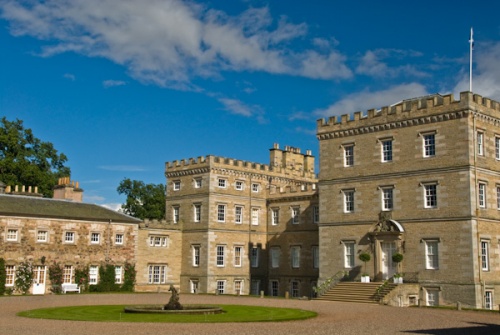 Mellerstain is one of Scotland's great stately homes, a Georgian masterpiece designed by William Adam and lavishly completed by his son, Robert Adam. The interiors are considered some of Robert Adam's finest work.

The estates at Mellerstain changed hands among leader Border families throughout the medieval period. But the real history of Mellerstain House starts in 1642 when King Charles I granted lands at Mellerstain to an Edinburgh merchant named George Baillie.

Baillie lived in a fortified tower house situated where the mansion now stands. But he did not have long to enjoy his new home, for he died in 1646 and was succeeded by his son, Robert Baillie.

Robert was a firm follower of the Covenanter principles, and his beliefs brought him into regular conflict with the authorities. In 1676 he was imprisoned in Edinburgh Tolbooth for an attempt to rescue his brother-in-law from arrest. In addition to 'serving time' in the Tolbooth, he was fined £500, a huge sum for the times.

While he was in prison Sir Patrick Hume, later to become the Earl of Marchmont, sent his daughter Grisell, aged only 12, to carry messages to Baillie. Baillie was eventually released, but in 1684 he was in trouble with the government again, and this time he paid with his life, executed for high treason. His estates were forfeited to the crown, and his son, George Baillie, now penniless, fled to the Low Countries. 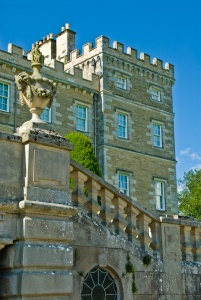 Sir Patrick Hume and his family, whose estates were also seized, fled to Holland too. Baillie served as an officer in the Horse Guards of the Prince of Orange, and a romance developed between the young officer and Grisell, now fully grown.

Things might have looked bleak, but the fortunes of the Baillie and Hume families were about to change, for in 1688 the Prince of Orange was invited to take the throne of England as William III, ruling jointly with his wife, Mary. Sir Patrick Hume and George Baillie came to Britain with the new monarchs, who restored their Scottish estates. Three years later, in 1691, George Baillie married Grisell Hume.

The family fortunes continued to improve, and in 1725 the Baillies decided to replace their outmoded tower house with a grand new mansion in classical style. Architect William Adam was called upon to provide plans for an ornate house with long wings astride a central block.

He also laid out formal gardens in a Dutch style, with a newly formed lake surrounded by raised banks and dotted with classical statues. But only the two wings of the new house were complete before George Baillie died in 1738, leaving the house unfinished. 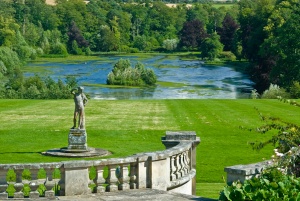 View of the lake

In 1759 another George Baillie, grandson of the builder, comes onto the scene. Influenced by the classical buildings he encountered on his Grand Tour of Europe as a young man, this George Baillie commissioned William Adam's son, Robert, to finish what his father had begun. But rather than simply complete the earlier plans, which by now were woefully out of fashion, Adam designed a castellated central block, linking seamlessly to the earlier wings.

Though the exterior of Mellerstain is a good example of Adam's 'castle style', it is the interiors that really deserve attention, for here is Adam at his masterful best. The plasterwork is outstanding, particularly in the library, and the attention to detail is outstanding. The interiors are a mix of comfortable family home and exquisite staterooms, meant for show and to impress visitors. This task they carry off in style!

We came here as a family group, with our young children. It's always a bit of a gamble bringing children to a stately home, but actually they quite enjoyed themselves (the promise of ice cream at the end of the visit helped). The adults enjoyed themselves too, but for different reasons.

The interiors of the house are wonderful; the Georgian neo-classical style is one of my favourite time periods, and the Adams, father and son, were masters of the style. The setting is superb, with wonderful gardens and parkland surrounding the house (which not coincidentally provided plenty of space for our children to run about and burn off excess energy). I loved Mellerstain and would happily return again. 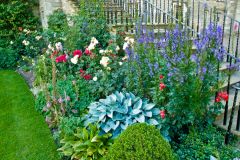 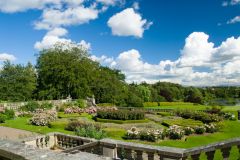 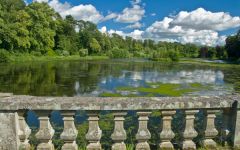 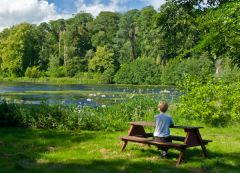 More self catering near Mellerstain House